A relentless U.S. attack -- the Jamaicans fouled to stifle a pair of first-half breakaways -- surged as its supporting cast improved in the second half. The 18-year-old Ricardo Pepi scored both goals, assisted by two 20-year-olds, for a 2-0 home win in their fourth game of the 2022 World Cup qualifying campaign. 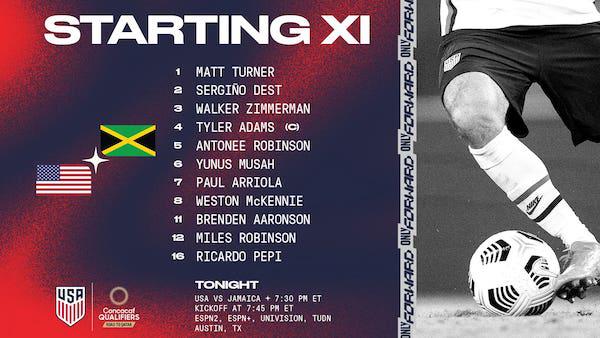 Matt Turner made a nice diving stop -- his only save -- on Jamal Lowe's 41st-minute effort, albeit a shot that didn't have much power on it. Impressive was Turner's distribution. He bowled the ball smartly to Sergino Dest on what turned into a goalscoring counterattack to make it 1-0.

Right back Sergino Dest proved capable of attacking deep in Reggae Boyz territory but failed to deliver in the first half. He improved significantly in the second half. On the first goal, Dest brought the ball upfield and when he received it back from Yunus Musah, delivered it to Ricardo Pepi to head home for the 49th minute lead. Dest kept the ball in bounds with a nifty touch during the buildup to the second goal. Left back Antonee Robinson missed two teammates with a low pass from the wing after Brenden Aaronson set him on a promising run on the 20th minute. His next attempt to deliver into the middle was a high cross easily blocked by a Jamaican. But Robinson also improved in the second half, and he fed Aaronson to set up Pepi's second goal. Despite his inconsistent touches, Robinson's forays kept the Jamaican defense on its heels. Central Walker Zimmerman won the header that sparked the first U.S. attack. He robbed Shamar Nicholson on Jamaica's first promising counterattack, in the 26th minute. In the 71st minute, he intercepted a ball while defending in the Jamaica's half. His central defending partner Miles Robinson's flawed pass in the 15th minute went unpunished and otherwise he defended solidly.

Tyler Adams mainly swept in front of the backline and covered for his midfield partners, an important duty as Weston McKennie roamed to various parts of the field. Adams sent the pass to Antonee Robinson during the buildup on the second goal. By often moving forward quickly, McKennie kept the Jamaican midfield unbalanced, which proved of great value late in the game as the Jamaicans failed to attain any momentum in hopes of a comeback. Yunus Musah was among those who improved in the second half, his composure on the ball contributed to U.S. dominance, and his combo with Dest set up the first goal. He also took part in the buildup on the second goal, relaying the ball from the right to the left flank.

The best frontline performance in recent history. Within seconds of kickoff, Ricardo Pepi got fouled as he relayed a pass from Brenden Aaronson and sent Paul Arriola  storming toward goal -- until fouled by Kemar Lawrence. Referee Reon Radix didn't invoke DOGSO and Lawrence escaped with a yellow (while the hit on Pepi went unpunished). In the 33rd minute, Aaronson robbed Damion Lowe and passed to Arriola. When Aaronson received the crisp return pass from Arriola, Lowe took him down with a foul from behind. (Again, Radix showed only a yellow.) Aaronson's dynamic play -- which included making himself available to midfield passes -- unfortunately wasn't complemented by finishing acumen. His four shots were off target. But his delivery to Pepi on the second goal was beyond reproach. The 18-year-old Pepi scored the first with an acrobatic header and he timed his run perfectly to lunge onto Aaronson to score his third goal in two games.

Among the impressive aspects of the U.S. win: It defended its lead by storming toward the Jamaican goal, led by relentless wide forays of Tim Weah and his ability to shed defenders on the dribble. Gyasi Zardes failed to convert three chances (or half-chances) but he helped ensure that the Reggae Boyz had to focus on losing by less rather than threatening a comeback.