Ricardo Pepi, mature beyond his years 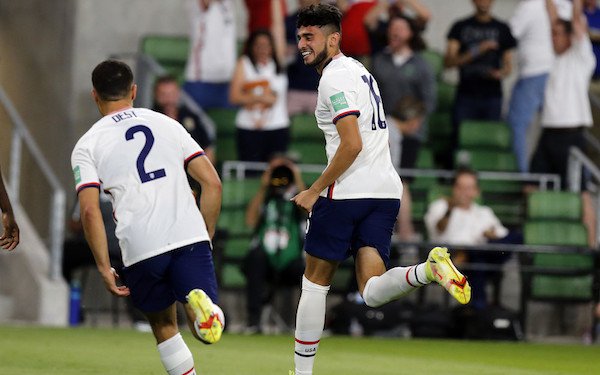 Unless you saw Ricardo Pepi go over after Thursday's USA-Jamaica game in Austin to thank his family and its friends who had traveled from El Paso to watch him play, you might not have realized he is only 18 years old.

If you forget his USMNT jersey and the U.S. and FC Dallas jerseys his mom and dad and brother and sister were wearing, the scene looked like any 18-year-old Texan greeting family and friends after a big high school football game. Hugging his brother, the most excited, first, then his mom, dad and sister and going down the row to all the adoring girls.


Pepi's big game? After scoring one goal and assisting on two others in his international debut at Honduras on Sept. 8, Pepi followed that up with both goals for the USA in the 2-0 win over Jamaica that moved it into first place in the Octagonal.

Soccer America has been doing Player Ratings for almost 30 years, and never has a player gotten, to the best of our knowledge, a "9" in back-to-back games, let alone his or her first two international matches, like Pepi did against Honduras (Game Report) and Jamaica (Game Report).

Pepi's performance in his first two international matches has even U.S. coach Gregg Berhalter in awe.

"We're all excited. We're just sitting there, and we're on the train," Berhalter said after the win over Jamaica. "We're just observing everything that's happening. It's amazing. An 18-year-old gets an opportunity and takes advantage. What you see and what I really like is that he has this instinct, and it's really hard to teach that to players. He has an instinct to score."

Indeed, Pepi has the talent of all great goalscorers to finish his chances. Other attributes include strength, agility, anticipation, touch. But what stands out about Pepi is his maturity.

If ever there was a game in which Pepi could have become impatient, this was it. He hardly saw the ball in the first half against Jamaica. In previous games, U.S. coach Gregg Berhalter had criticized his strikers for trying to come back to receive the ball. But Pepi resisted that temptation, hanging out on the edge of Jamaican line and waiting for his first chances.

Both goals came from where he needed to be: in and around the six-yard line. He dropped between two Jamaican defenders and flicked Sergino Dest's header inside the far post for the first goal, beating the great Andre Blake, MLS's best keeper over the last decade and a big reason Jamaica reached the Gold Cup final in 2015 and 2017. On the second goal, Pepi darted in to slide Brenden Aaronson's pass past Blake.

Pepi, who had the sense to stick to his positioning, makes everything look easy even when it shouldn't be. After the game, Berhalter admitted he was concerned about all the minutes Pepi had played for FC Dallas recently and how last week he looked exhausted.

"Yeah, it was difficult to be able to maintain, just being physically ready," said Pepi, who exited in the 68th minute, shortly after he scored his second goal. "But it was a special moment for me and for the team. I feel like we needed these three points and we went out there and we pulled it off."

A lot has come quickly for Pepi. Until mid-June, he was not even a regular starter for FC Dallas. Then he broke out with seven goals over the next month. By the end of August, Pepi was picked for the MLS All-Star Game and asked to make a decision: USA or Mexico?

"I feel like I worked just to be able to be on the squad," Pepi said. "Being able to represent my country, I feel like I made a big decision and, like I said when I made my decision, I was going to give my all to the team, and that's what I'm doing."

Has it come all too quick?

Spoken like a young man mature beyond his years.