The USA looked starkly different in personnel and performance from its 2-0 win over Jamaica on Thursday in Texas as it fell, 1-0, in Panama City on Sunday. With seven changes to the starting lineup, the USA never tested Panama keeper Luis Mejia and failed to discover the second-half surge it has become dependent on. 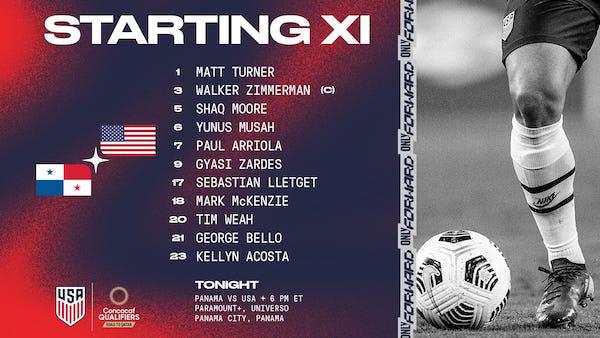 Hesitant to come off his line on early service from Rolando Blackburn, Matt Turner also looked shaky on first-half in-swinging corner kicks that he managed to tip away. With its first second-half corner kick, while Turner was stuck in a goal area crowd, Panama found the net from Aníbal Godoy's in-swinger via the Gyasi Zardes' head. Forced to play plenty of back passes, Turner did OK except in 44th minute, when he gifted Panama the ball before saving Yoel Barcenas' long-range shot. (Freddy Gondola was called offside when Turner blocked his close-range 34th-minute shot.)

Presumably, the outside backs were supposed to provide offense down the flanks but the inability Shaq Moore and George Bello to connect with the wide players was one example of the USA's disjointed play. Moore struggled to contain Gondola while Bello had to contend with a dynamic Bárcenas. When Bello made it upfield he crossed poorly. Central defenders Walker Zimmerman and Mark McKenzie intervened when Panama's wingers broke through. Despite having gotten a clear view of Panama's corner-kick strategy in the first half, the U.S. defense still fell victim to it on the game-winning goal.

Yunus Musah struggled defensively, as when he unsuccessfully tried to mug Edgar Barcenas, and offensively during his 45-minute appearance. Kellyn Acosta, who delivered poor corner kicks and free kicks, roamed the central midfield without bringing cohesion to it. Sebastian Lletget appeared only fleetingly capable of connecting useful passes but troubled Panama, which fouled him three times, more than the other midfield starters.

Unsurprisingly, forwards playing in front of a disjointed midfield failed to pose problems for Panama. Los Canaleros stifled Tim Weah, who had shedded Jamaican tackles when he came on as a sub on Thursday. Neither Weah, nor Paul Arriola or Gyasi Zardes managed a shot. Zardes appeared more in front of his own goal, successfully heading clear in the first half but deflecting the ball past Turner on the goal in the second half.

Ricardo Pepi's one shot, made more difficult because DeAndre Yedlin had fallen on the grass in front of him, went wide. Brenden Aaronson, subbed on at halftime, brought high energy into a team that needed more than hustle on Sunday. The other halftime sub, Tyler Adams, couldn't solve the USA's cohesion problem. Pepi's 70th-minute shot would be the final time the USA got close to Los Canaleros' goal.

NOTABLE: The USA is scoreless in the first half of its last eight games.

TRIVIA: The loss to Panama was the USA's second in 24 meetings and first in World Cup qualifying.