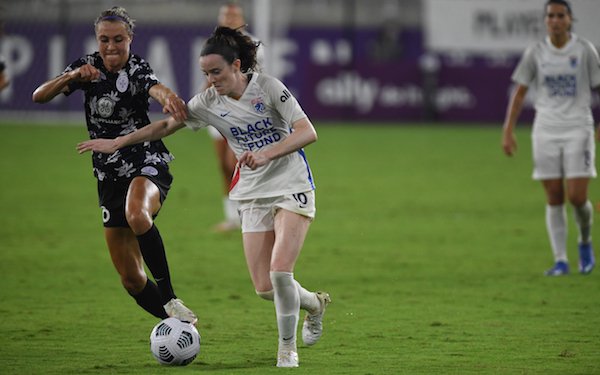 Less than three weeks -- interrupted by a FIFA window -- remain in the 2021 regular-season season, the longest in league history for so many reasons.

Teams began practice in February, a month earlier than usual, and then competed in the preseason Challenge Cup, which was won by Portland. And never has the regular season extended to the end of October.

A set of makeup games -- four on Wednesday and a fifth on Oct. 28 -- needs to be played following the postponement of league action on Oct. 1-2 given the gravity of the revelations about former North Carolina Courage coach Paul Riley.

All 10 teams returned and played at least one game last week when players gathered at the center circle in the 6th minute for a minute of silence in solidarity for and in recognition of the six years it took for the grievances of Mana Shim and Sinead Farrelly to reach a national audience.

Here's a look at how things stand ...

Who's clinched. The Thorns and OL Reign are the only teams to clinch playoff berths. Wednesday's makeup game at Providence Park will go a long toward determining who claims first place.

OL Reign has won the first two meetings with Portland and is the hottest team in the league. It is 9-2-1 since Laura Harvey returned as head coach.

Who remains in contention. Just four points separate six teams battling for the final four playoff berths. All have records of .500 of better.

Houston, the 2020 Challenge Cup winner, has won its last three games to climb into third place ahead of the slumping Courage, which has won just one of its last six games.

Sixth-place Gotham FC has an extra game to play and a favorable schedule with two games against ninth-place Racing Louisville and one against 10th-place Kansas City among its four game remaining.

Sunday's 3-2 loss at OL Reign left Chicago in seventh place and out of the playoff zone. The Red Stars have been the most consistent team in the NWSL, having made the playoffs in 2015-19. They were also the runners-up to Houston in the 2020 Challenge Cup.

Who's out. Both first-year teams, Racing Louisville and Kansas City, are out of playoff contention.