USA-Costa Rica: The loss to Ticos that haunts national team to this day 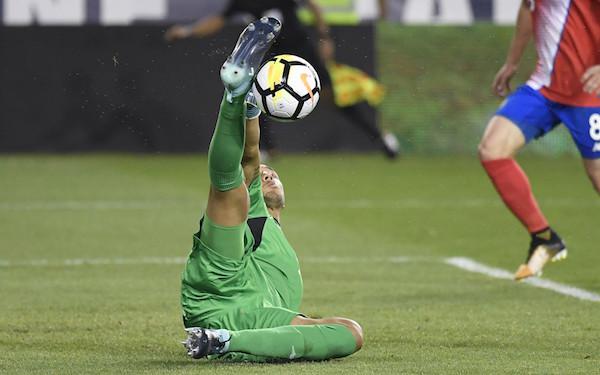 In the last 50 years, the USA has reached the final round of World Cup qualifying eight times and played 73 games.

In that span, it's been swept once.

The Ticos cost Jurgen Klinsmann his job as U.S. national team coach with their win at home in November 2016. Bruce Arena resigned six weeks after Costa Rica's victory in the aftermath of the 2-1 loss at Trinidad & Tobago, which eliminated it from the 2018 World Cup.

After Arena replaced Klinsmann following losses to Mexico and Costa Rica in the opening two games, the USA clawed its ways back into the top three with two home wins and two away ties. It also won the Gold Cup and entered the second Costa Rica game with a 14-game unbeaten streak under Arena.

All the USA needed to do was beat Costa Rica and Panama in its final two home games, and it would have clinched a berth in the World Cup 2018 finals in Russia. As it turned out, even a tie against Costa Rica would have been enough to go through.

How the Ticos beat the USA has haunted the national team ever since. They offered the prototype for how to stop the USA on the road in Concacaf play: Sit back and dare it to play out of the back.

On the first goal in the 30th minute, Tim Ream, out of options, decided to play the ball back to goalkeeper Tim Howard. On the sidelines, Arena could be seen waving his arms in frustration at Ream's decision.

Howard attempted to clear the ball with a long kick, but it went to Bryan Ruiz. The U.S. center backs Geoff Cameron and Ream were split wide apart, giving Ruiz plenty of space to find Marcos Urena, who rounded Ream and beat Howard with a shot to the far post.


Urena also scored the second goal, in the 82nd minute, on a play that began when Cameron played the ball straight to Costa Rican midfielder David Guzman, who put Urena through for a breakaway.


“On the night," Arena said, "we didn’t make any plays that mattered. We were probably outplayed in most positions on the field and made some critical errors. They outplayed us and outcoached us tonight.”

Costa Rica has seven starters still in the team that will face the USA on Wednesday night in Columbus, including goalkeeper Keylor Navas, whose stops on Christian Pulisic and Jozy Altidore preserved the Ticos' lead in the second half, setting Urena up for his insurance goal.

Costa Rica opened the Octagonal with three ties and a loss, but it climbed back into contention with a 2-1 comeback win at El Salvador on Sunday.

“Their strength is experience,” U.S. coach Gregg Berhalter said on Wednesday. “They’ve been through this before. They know exactly what it’s about and that's an advantage for them. Navas, I think is one of the best goalies in the region. They’ve got an experienced backline. With Bryan Ruiz and Celso Borges, they have experienced midfielders. To me, it's a team that knows exactly how to get this job done. There's no surprise that they found their way back into this thing."

The two shutout losses to Costa Rica in the last Hexagonal were the exception. Even though it finished fifth in the six-team competition and failed to qualify for the World Cup, the USA led the Hexagonal in scoring with 17 goals thanks in large part to a pair of wins at home: 6-0 over Honduras and 4-0 over Panama, its two biggest wins ever in the final round of World Cup qualifying.

In both games, the USA blew out its opponents in the first half. It was 3-0 at the half against Honduras in Arena's first qualifier in charge thanks to goals in the 5th, 27th and 32nd minutes and was 6-0 after 54 minutes. Against Panama, it was also 3-0 at the half on goals in the 8th, 19th and 43rd minutes. The USA scored only once in the second half, but Canalero coach Hernan Dario Gomez said afterwards the USA could've scored 10 goals.

"We have to figure out ways to break down a compact defense," Berhalter said after the Canada game, "because I'm sure there's going to be other teams that come to the United States and do the same thing."

Jamaica did the same thing on Thursday in Austin, but the Reggae Boyz' discipline eluded them in the second half, allowing the USA to break their backline apart for a pair of Ricardo Pepi goals.

There is nothing to suggest that Costa Rica will fold as easily.

"It's a resilient team," added Berhalter on Wednesday, "and a difficult team to beat.”