The USA reacted to Costa Rica's early goal with waves of attack from all angles that kept the Ticos pinned down in their own half and produced Sergino Dest's golazo equalizer. Tim Weah's powerful narrow-angle shot reached the net via the post and goalkeeper Leonel Moreira for the deserved gamewinner. The high-paced, exciting U.S. performance, following its dour effort in Sunday's 1-0 loss at Panama, marked its most impressive over 90 minutes of the qualifying campaign so far. 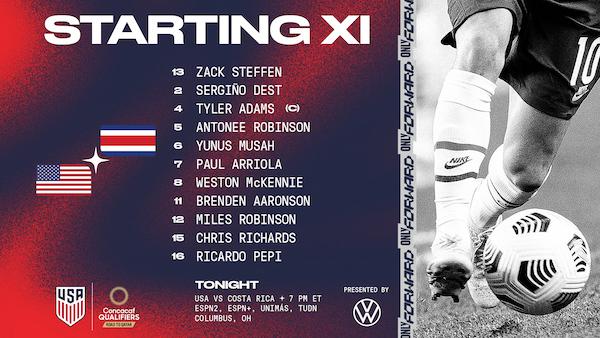 Within the first minute of play, Zack Steffen questionably came six yards out of his penalty area to head a ball and conceded a goal when the Ticos recovered it. Trying to reach Keysher Fuller's volley from 10 yards with both his foot and hand limited his reach as it bounced past him and into the net. He tipped a Celso Borges shot down the middle over the bar and on the ensuing corner kick did well to punch clear amid a crowd.

The backline lost track of Fuller and looked confused on the first goal, but suffered no shell shock. Miles Robinson won air battles, and made up for his own mistake after he gifted Bryan Ruiz a breakaway by chasing him down and tackling cleanly. Chris Richards' precise tackling prevented a first-half Tico chance. Left back Antonee Robinson could have done better with a couple crosses -- overhitting despite little pressure and blasting the ball into a defender -- but he surged constantly, and nearly created an own goal with one of his good deliveries. Antonee Robinson and Richards combined with Tyler Adams to play the ball out of the back under pressure in the sequence that led to the first goal. Right back Sergino Dest's skillful touches and well-timed forays become USA's sharpest weapon and he topped it off with a beautiful 18-yard strike. He also relayed the ball to Tim Weah on the second goal. Dest's delightful play included nifty back-heel and robana passes.

The ever-present Weston McKennie fined-tuned his passing after early inconsistency and motored many of the USA's attacks. One his second-half cross-field passes didn't reach a teammate but bounced off a Costa Rican to Dest ahead of the second goal. Yunus Musah complemented Dest's right flank play and served him on the goal. Tyler Adams' defensive midfield work created freedom for the outside backs to attack while covering for McKennie, who also took part in the 1-0 buildup.

The unpredictable positioning of Brenden Aaronson and Tim Weah no doubt befuddled the Ticos. Aaronson often moved into the midfield and they were both on the same side when Aaronson received McKennie's pass, stormed down the left flank and fed Weah ahead of the first goal. Weah sent the ball all the way to the other sideline, where Musah controlled it before passing to Dest. Ricardo Pepi fell short on three half-chances, but he got some positive touches in, such as setting up McKennie for a chance in the 14th minute.

All the subs arrived with the USA leading 2-1, and continued pressuring the waning Ticos, especially  DeAndre Yedlin and Gianluca Busio on the right flank.

TRIVIA: The U.S. starting lineup (average age: 22 years, 199 days) was the youngest ever for a game in official competition.

NOTABLE: The USA broke an eight-game streak of not scoring in the first half.