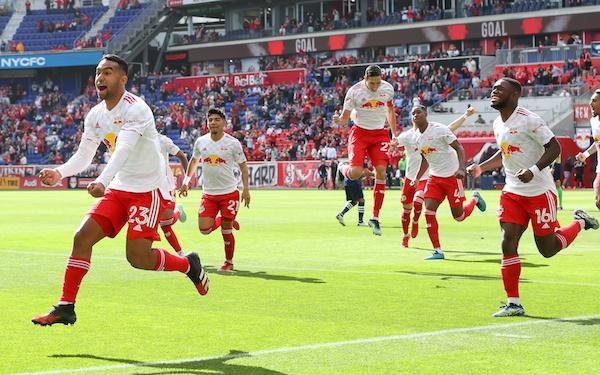 A month ago, the New York Red Bulls were considered a long shot to make the MLS playoffs.

But since then, they have gone 5-0-2 to climb to within one point of CF Montreal, which sits in seventh place in the Eastern Conference.

Improbably, the Red Bulls caught archrival NYCFC thanks to a 1-0 win in their Hudson River Derby on Sunday. Venezuelan Cristian Casseres Jr.’s goal in the third minute was the winner.  Brazilian keeper Goalkeeper Carlos Coronel earned his third straight shutout to give 11 in 2021, tied for second in MLS.

All three Hudson River Derby meetings have come in the last month, and the Red Bulls have taken seven of nine points as they have wiped out NYCFC's 12-point edge. Both teams have 40 points and NYCFC leads on goal difference (the second tiebreaker).

“The last few weeks show us," said Red Bulls coach Gerhard Struber, who took over at the end of the 2021 season, "we realize more and more what is our clear identity."

The Red Bulls have been starting the youngest team in MLS with an average age of 23. Of the 14 players who played on Sunday, eight are in their first season with the Red Bulls' first team, including 19-year-old John Tolkin, who was signed as a Homegrown player but did not play with the first team in 2020.

The Red Bulls have been winning without Caden Clark, who will join RB Leipzig in January. The 18-year-old Minnesotan has made just three appearances off the bench during the Red Bulls' unbeaten run and has slowed down after an appendectomy sidelined him in June.

NYCFC, which has not scored in its last four games, dropped to eighth place on Saturday when Montreal tied Philadelphia, 2-2, on a goal in stoppage time. It has made the playoff the last five years, never finishing lower than fifth in the Eastern Conference.

“We have lost a bit of confidence in the last third of the pitch," said second-year coach Ronny Delia. "We have to get that back again."

NYCFC will have to act quickly. It has four games over the next 14 games. Both the Red Bulls and NYCFC have five games left in the regular season.