Alex Morgan: Trust between players and NWSL 'just not there yet' 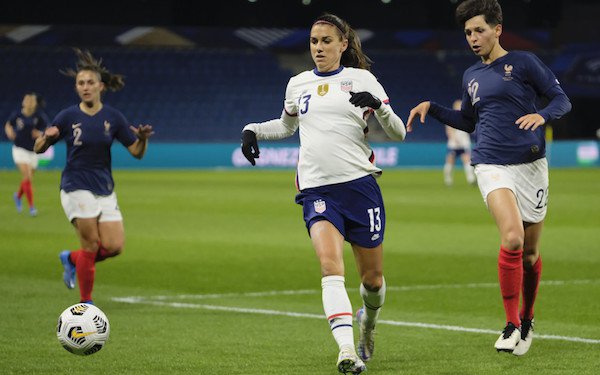 A day after the NWSL Players Association extended the deadline for the NWSL to meet demands related to the investigation into abuse within the league, U.S. star Alex Morgan admitted that trust is "just not there yet" between the players and league.

Morgan, who was speaking on a media call from the U.S. women's national team camp ahead of a pair of friendlies against South Korea, has played a central role in supporting Mana Shim and Sinead Farrelly, who were her teammates at the Portland Thorns in 2014 and 2015 when Paul Riley was their coach.

Riley was fired as the North Carolina Courage head coach on Sept. 30 after a report in The Athletic detailing allegations by Shim and Farrelly of sexual coercion and misconduct by Riley.

NWSL commissioner Lisa Baird issued a statement that she was “shocked and disgusted” by the report but soon thereafter Morgan tweeted an email exchange between Farrelly and Baird from earlier in the year when Farrelly sought unsuccessfully to get Baird to look into her complaint about misconduct. On Oct. 1, a day later, Baird resigned.

As an allocated player on the U.S. women's national team, Morgan is a member of the U.S. Women's National Team Players Association and not the NWSLPA, but she said has been kept apprised of the NWSLPA's position by the players representatives on the Orlando Pride, for which she plays.

"The demands that the PA has put forth for the NWSL to commit to and to approve have still not been taken care of," she said, "and there has been an extension. So that in itself says that the NWSL still is being a little too reactive. I know that there are a lot of things that need to change, but we need to start building that trust, and at this point it's just not there yet."

The U.S. women are training at the Compass Minerals National Performance Center in Kansas City ahead of Thursday's friendly against South Korea. It is their first gathering since the revelations about Riley, who coached six players on the U.S. squad that won the bronze medal at the Tokyo Olympics.

"It's actually good to come in here," Morgan said, "and just have conversations with some players that I haven't talked to in the last few weeks."

The USWNTPA was certified in 2000, while the NWSLPA, recognized in 2018, is still negotiating its first collective bargaining agreement with the NWSL, which was launched in 2013.

Added Morgan: "So I think that for us to come together and to be able to throw ideas and brainstorm together in order to see how we can help the NWSLPA, how we can help get the NWSL on the right path in a way that's successful for both the players and the clubs is important."

nwsl
1 comment about "Alex Morgan: Trust between players and NWSL 'just not there yet'".
Next story loading