In its third friendly since its Olympic bronze-medal finish in Japan, the U.S. women’s national team on Thursday dominated in almost every box on the stat sheet — except the scoreline. The last touch was missing against a defensive-minded South Korea team that often had at least eight players behind the ball. Coach Vlatko Andonovski's squad improved in the second half with fresh energy from Sophia Smith and Mallory Pugh. The good news was that there were plenty of chances created from some good collective movement and individual play. South Korea will be happy with how it executed its game plan and earned a 0-0 tie in the first game of the two-game series. 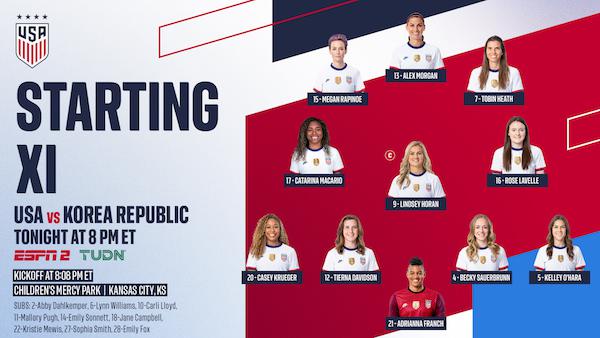 Adrianna Franch did not have much to deal with but handled her duties well when she was called on. The Salina, Kansas, native distributed the ball well and made no mistakes.

Becky Sauerbrunn demonstrated some great footwork early on and kept the U.S. backline watertight alongside the perfectly adept Tierna Davidson. The center back duo didn’t have a ton to worry about but when they did they dealt with the danger with a calmness that reflected their experience. Casey Kruger advanced on a number of occasions and managed her defensive duties well. The U.S. backline had little to deal with, especially in the second half when the Korean side tired. Kelley O’Hara supported the U.S. attack with poise and recovered smartly on one of South Korea’s few attacks in the second half.

Rose Lavelle created some excellent chances and combined with Lindsey Horan often in front of Korea’s box. Lavelle was the engine for the USA and also had an excellent header around the hour mark cleared off the line. Catarina Macario kept possession well but failed to make a legitimate offensive impact. Horan bossed the center of the field with confidence and recovered the ball often, quickly finding U.S. attackers with line-splitting passes.

Alex Morgan had the best chance of the first half but couldn’t beat the excellent Korean goalkeeper Yoon Young-guel. Tobin Heath did well to provide service in the first half, as did Megan Rapinoe, but both did little offensively to affect the result. The starting trio pressured the Korean backline diligently but with Korea’s bank of eight defenders behind the ball, it was difficult to break them down.

Sophia Smith impressed with some great energy as soon as she entered the match -- particularly a flashy first touch to create an opportunity for Lavelle down the right side. She continued to shine and was the USA’s most dangerous player in the second half.  The swan song for Carli Lloyd continues but she did not influence a game that perhaps needed speed rather than experience — though the crowd did cheer with glee every time she was on the ball. Lloyd did have a good left-footed shot saved by Yoon, who was up to the task all night long. Mallory Pugh, like Smith, thrived on the wing and did well when she got the ball but struggled with her end product. Her one chance came in the last 10 minutes when she danced into the box but took too long on her finish and her space was closed down.

NOTABLE: The USA failed to score for the first time at home in 60 games. The last time was a 1-0 defeat to Australia at the 2017 Tournament of Nations in Seattle, its last home loss.