PRO's Greg Barkey on Video Review's complexities, the evolution of American reffing, and his childhood in Argentina 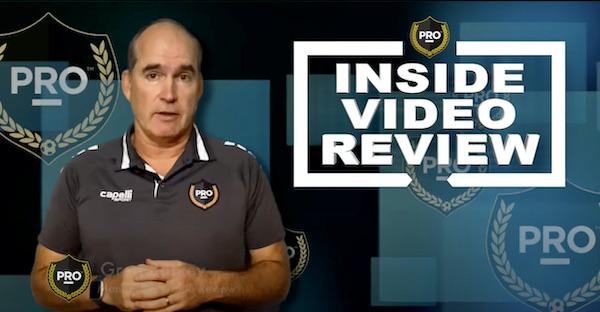 Longtime New Jersey resident Greg Barkey grew up playing soccer in the streets of a small town in northern Argentina where his parents served as missionaries.

While playing college ball at Bethel University in Minnesota in the 1980s, Barkey began refereeing to help pay for his education. He continued while teaching high school and became the first assistant referee to work 300 MLS games. Barkey, whose international officiating included World Cup qualifiers, the Gold Cup and a U-17 World Cup, is now the manager of Video Review at PRO (Professional Referee Organization). Starting in 2018, he helped oversee MLS's rollout of Video Review and he currently hosts the PRO's YouTube series Inside Video Review in English and Spanish.

SOCCER AMERICA: What drew you to refereeing?

GREG BARKEY: I got into refereeing during college because I needed to make some money. A friend and I took the course and I started in the adult leagues right away. In the beginning it was solely to make money, but I also liked it.

SA: You grew up playing soccer in Argentina?

GREG BARKEY: When I lived in Argentina, I played for the youth levels of the local club and on the weekend everyone from the town would come out to the [first team’s] game. The result of the game would set up the whole week. If we win, it's a positive week ahead. If we lose, it's a negative week ahead. It helped me relate to my childhood.

SA: Your fluency in Spanish came from your time in Argentina…

GREG BARKEY: Yes. I went to public school and also did English school via correspondence. You actually had to mail it in. So my education came in English and Spanish.

SA: While reffing, were there times when you communicated with players in English and Spanish?

GREG BARKEY: Usually what I've done is not let anyone know I know Spanish until it's in my favor to do so. About 30 minutes in, someone will start complaining and I'll talk to them in Spanish. The team will go, "Oh, wait a minute, the ref knows Spanish, everyone relax."

If you talk to anyone in their language they appreciate it more. They might understand you better, etc. It's always been good for me, especially when I was working in Concacaf. When we would travel I would always end up being the translator for instructors and other referees.

SA: There's a level of respect you get when you talk to someone in their language ...

GREG BARKEY: Since I grew up [in Argentina] I understand the cultural part of it too. There's a cultural understanding of the way people behave and why they do things, and the language I use is from the streets — it's not something you learn in a classroom.

GREG BARKEY: There are accent and dialect differences for Colombians, Argentines, Mexicans, etc. because I can speak in the various ones, it shows players I understand the more subtle differences of Spanish and the cultural part of it. If you use certain words with certain players from certain countries — they get a better understanding of who you are and what you know. 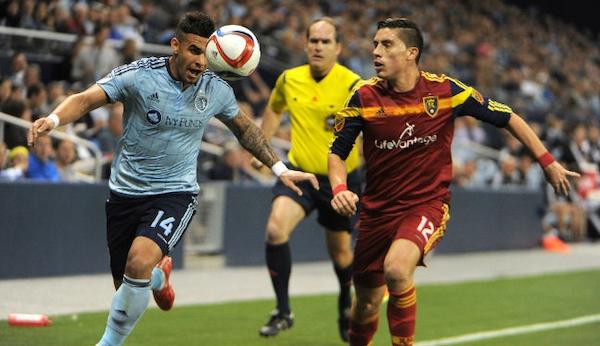 SA: Compared to now, what was soccer officiating like when you started in the mid-1980s?

GREG BARKEY: It was very state by state. If you happened to be in a state that had decent soccer, you might have some better resources.

When I first started out, I didn't have any thoughts of becoming a professional ref. There wasn't a sniff of that type of thing. Refereeing was at the amateur level for everyone. You had some better referees, and those were the ones you connected with and listened to.

Basically, officiating the higher-level youth games was the way to advance. Luckily for me, I spent most of my time in the adult amateur game in New Jersey. There were good youth and adult leagues with different ethnicities and varieties. That enabled me to learn quicker.

SA: How many games did you ref in a year?

GREG BARKEY: Probably close to 70-80 games...most of those were adult amateur, which meant you could do two games a day, go to a tournament, etc. It became more serious when you reached the national level, refereeing semi-pro and getting watched by certain people. Even then it wasn't really organized — we only got together once a year for a national refereeing camp.

SA: How is that different from today?

GREG BARKEY: At the professional level we get together monthly. There's much more access to information, guidelines, plays to watch and learn from. There's a lot more to it today than just showing up and reffing games. Now you advance by being watched by the right people and passing assessments. 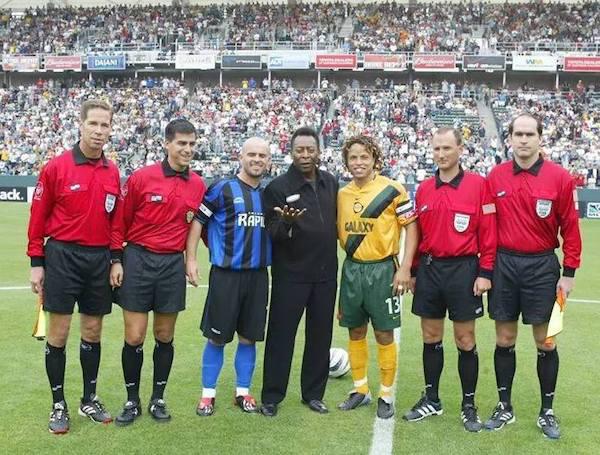 SA: Your Inside Video Reviews provide fascinating insight into how Video Review works. One example, the VAR call for Maxine Chanot’s yellow-red card during the derby match between the Red Bulls and NYCFC. Can you walk us through it?

GREG BARKEY: The main thing with Video Review is that it starts with the on-field decision. The referee at that point didn't see anything unusual. He probably saw the hand close to the body. Immediately that triggers the VAR to start looking at it to see if the call was clearly wrong. The VAR spots that secondary motion — there's an assistant VAR who is looking at the live play and keeping track of it. All those people are working together and say, "Look, referee, we think you've seen this wrong, we think it's a clear error, we think you need to see it again." That's when we ask them to look at the monitor. 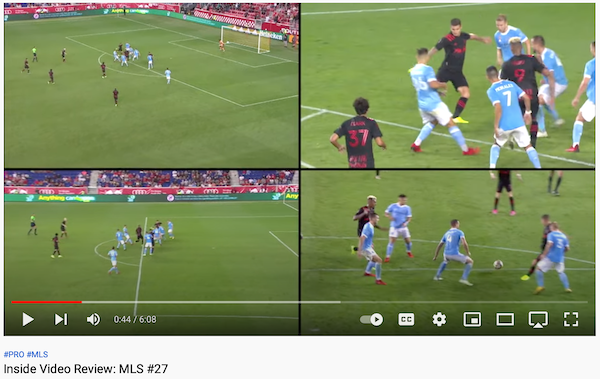 SA: I was impressed with Video Review at last year's European Championship. How about you?

GREG BARKEY: They raised the bar to make sure they only got involved when they really needed to. They cut back on saying, "Well, it's controversial, we'll take another look." That's what really helped them. You could really change almost any decision depending on the angle.

One of the biggest problems with Video Review is that VARs have a really hard time seeing force. Video doesn't show force very well.

VARs are getting better with more games, and I think that's happening around the world — you have to remember that Video Review is really only three and a half years old globally.

SA: MLS's introduction of Video Review seemed to go more smoothly than in other leagues, such as the English Premier League ...

GREG BARKEY: MLS is a relatively new, young league willing to experiment. Before we had Video Review, we had people in the stands counting the amount of times there might be a review of something.

We're pretty happy where we are at MLS in regards to how often we get involved and how we implement Video Review. We still miss things. Maybe some people thought Video Review would mean we get every decision right. Well, as long as you have human beings you're going to have errors.

On a Monday morning, in the calmness of the day with a cup of coffee, you can start looking at tape and say, this was a clear error, it should've been reviewed. But you can't have a VAR spend five minutes looking at a clip — we expect them to make a decision within 35-45 seconds. If it takes them longer than that, the credibility is lost. If it's so clear and obvious, it shouldn't take that long to figure it out.

At MLS we're at approximately two minutes for the entire review, which is basically from the moment the incident happens to when the referee comes away from the monitor and makes his or her final decision. It seems to be accepted that that's the right length. Take longer and you risk killing the game.

SA: Concacaf just announced it will finally start using Video Review for the remaining World Cup qualifiers. Why do you think it took so long?

GREG BARKEY: Setting up Video Review is not all that easy. There are a lot of technical parts. You have to have a separate server recording it and somewhere to play it back. The technology is expensive.

In Concacaf, you have some stadiums that don't have the infrastructure to do it as it should be done. It's about internet issues, connectivity, ensuring the trucks they bring in can actually connect, certifying the stadiums to make sure they can actually do it. And you have to have the personnel.

Concacaf started training Video Review officials and halfway through the pandemic hit. So they were halfway trained at that point. There were no Concacaf refs with more than five games of experience with Video Review — the only experience they got was at the Gold Cup. Maybe a game or two here as part of our training program.

Also, all the VARs in Concacaf were Mexican, Canadian or American, and you need two additional refs from a neutral country for Video Review.

SA: One criticism of Video Review is that it seems to be enforced differently in different leagues. Why is that?

GREG BARKEY: Some of it is how they set it up. There's a culture of soccer and what is expected. But the line, "clear and obvious error" — what is that? Where does it end? Too many reviews disrupt the game. They take away from the authority of the referee. It's not about getting the better decision, it's about not getting the wrong decision.

We decided [at MLS] that we only wanted to get involved when we think there are clear errors — when people are looking around going, "Nah, this is wrong, this has to be fixed."

If you think about the Thierry Henry handball [ahead of teammate William Gallas' goal that gave France a 2-1 aggregate win over Ireland in their World Cup 2010 qualifying playoff], you can't blame the referee because it was hidden from his view, right? We felt early on that those types of situations are what it was meant for.

referees
3 comments about "PRO's Greg Barkey on Video Review's complexities, the evolution of American reffing, and his childhood in Argentina".
Read more comments >
Next story loading