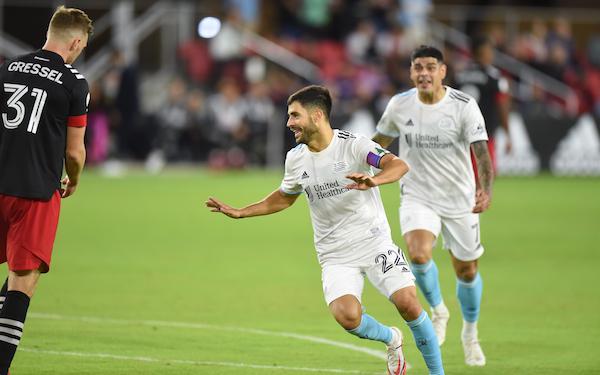 There appears to be no stopping New England Revolution and its three DP stars.

The Revs rallied from one goal down to beat D.C. United, 3-2, on Wednesday night at Audi Field.

All three Designated Players scored: Adam Buksa and Carles Gil to erase United's lead with goals in the 61st and 64th minutes, respectively, and Gustavo Bou with the insurance goal in the 79th minute that became decisive when United added a second goal in stoppage time.

"I thought Adam had a great goal," said Revs coach Bruce Arena. "Certainly, the next two by Carles and Gustavo were outstanding goals as well."

New England improved its record to 21-4-6 for 69 points. If the Revs beat Orlando City on Sunday, they will clinch the 2021 Supporters' Shield and tie the MLS record for points in a season LAFC established with 72 points in 2019. Seattle, the Western Conference leader with 58 points, needs to beat Sporting KC on Saturday to stay alive in the Shield race.

New England will head to Orlando with a four-game winning streak on the road and a record-tying 10 away wins in 2021.

“It’s very good," Arena said of the Revs' road record. "I don’t know what I can say about that. That’s certainly outstanding. We play 17 on the road and typically teams in our league have losing records on the road. It’s an exceptional record.”