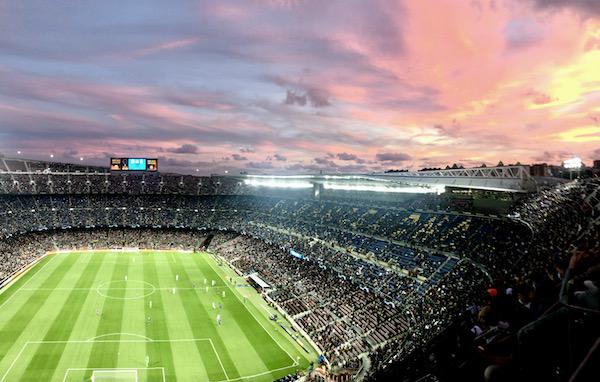 We had been warned not to expect a festive fan atmosphere at the Camp Nou, Europe's largest stadium and the home not so long ago to some of the greatest soccer the world has ever seen. But at times during Barcelona's 1-0 win over Dynamo Kyiv one could have heard the sound of an empty plastic cup of cero-cero beer drop at the other side of the 99,000-capacity stadium.

In comparison, an average MLS game delivers La Bombonera exhilaration. During our post-game meal at the Asador de Lugo, we told our waiter, after learning he was a Barcelona fan, of the extremely subdued crowd of 45,968. "It's because they feel like they're at a wake," he said. "The stadium's crumbling and the team's bad."

There's also the club's $1.5 billion of red ink, amid which President Joan Laporta speaks of cobbling together the financing to renovate the stadium which opened in 1957. It didn't feel as dilapidated as our waiter described, but certainly disappoints after a couple of days of admiring the overall grandeur of Barcelona. The big screen doesn't show game footage or replays. It displays blurry match stats from time to time and at halftime aired a commercial featuring Leo Messi, as if fans needed another reminder of what once was. 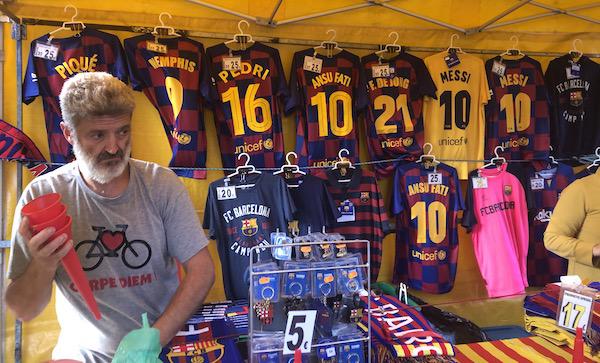 Despite his departure to Paris, Messi's jerseys continue to take up space at the souvenir stands, which have yet to feature the No. 2 jersey of the 20-year-old U.S. national team's Sergino Dest. After a successful move from outside back to right wing in last weekend's 3-0 win over Valencia, Dest is again starting up front in Barcelona's must-win Champions League game, following big losses to Benfica and Bayern Munich, on this Wednesday evening.

While walking around the stadium the very long way for Gate 4 access -- the steward at Gate 19 assured us it was a short "one-cigarette" journey after he denied us stadium entry at the acces he was in charge of -- we find evidence that Dest Barcelona jerseys are available. It's worn by a Mexican-American from Texas who explains he got it on request at the big Barca store, which prints name and numbers on shirts on order.

We bought our tickets -- seats in the farthest, cheapest section --  on a secondary ticketing website for about $35, nearly half the original price.

Worries of a low turnout had started after last weekend's LaLiga game produced a half-full turnout that meant a significant amount of season-ticket holders didn't bother showing up as Barcelona returned to full capacity crowds (upon lifted pandemic restrictions) nor went to the effort of reselling their tickets.

The early Champions League kickoff slot (6:45 p.m. instead on 9 p.m) caused further anxiety about the attendance in a city where you meet for drinks at 10 p.m. to plan where to go for appetizers and then dinner. Laporta pleaded with fans to rush away from work and classes to support the Blaugrana. 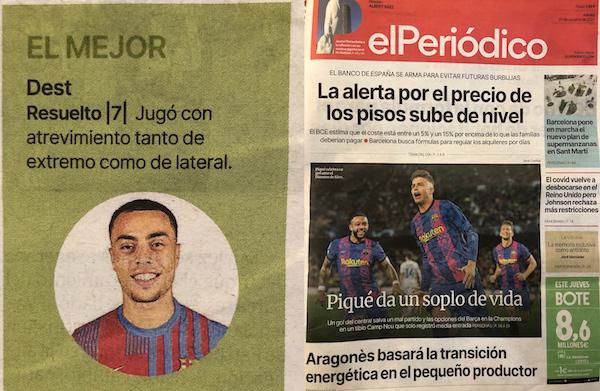 All queried in a few person-in-the-street interviews thought it "unbelievable" that Ronald Koeman was still in charge. But the fans at the game -- a large number of which were, like our foursome, tourists -- neither booed nor chanted abuse at the Dutch coach. The loudest jeers during a performance that one newspaper would call "agonizing" and another dubbed "sad" came when the UEFA anthem played ahead of kickoff.

Dest played up front as far as possible while staying onside, and usually within a yard of the right sideline. He helped create Barcelona's first scoring chances, heading wide and into a defender from left-side crosses, and he sent in crosses from his side. In the 27th minute, Dest beat two defenders but lost the ball to the third. His inconsistent success with first-half forays produced three corner kicks, the third of which came when he was offered Barcelona's clearest shot but couldn't beat Dynamo's goalkeeper Georgiy Bushchan, who deflected the ball out of bounds. Gerard Pique's game-winning goal came on that corner kick.

Koeman's halftime adjustment gave Dest more defensive duties, which he handled easily against the sadly timid Ukrainians. In a game with few highlights, his combo play in the 61st minute, during which he smoothly played on a third return pass after recovering quickly after an uncalled foul, was among them.

Dest's play with Barcelona compared to with the USA, such as his brilliant performance against Costa Rica, differs remarkably in how much more toil is required in his USA role. Coach Gregg Berhalter should consider unburdening the skillful Dest of most of his defensive duty.

The Dutch-raised Dest first played for the USA when U-17 coach John Hackworth called him up in October 2016. Then Dest played at the U-17 World Cup and for Coach Tab Ramos' quarterfinalists at the 2019 U-20 World Cup. The Spanish media usually refer to Dest as an American -- "the little American" in some cases -- on a team that includes six other Netherlands players.

While most attention during the post-Messi era has been on the under-performers and the potential of Ansu Fati, Dest has been emerging from under-the-radar while benefitting from Koeman's coaching decisions.

This Sunday, Barcelona hosts Real Madrid for the season's first Clasico. A chance for Dest to take another step toward earning a jersey spot in the souvenir booths of the Camp Nou.