Putting the Dakotas on the soccer map takes effort and creativity and, yes, travel

A few years ago, I gave a presentation at the United Soccer Coaches convention in which I lamented the unnecessary travel sapping resources from travel soccer. Aside from a pro club’s upper-age academy clubs, why would anyone travel more than 90 minutes?

In some cases, even a 90-minute trip isn’t enough to find high-level developmental games or get noticed by college or pro scouts. The country’s chaotic network of clubs, colleges and federation programs still don’t reach everywhere on this vast land mass.

“We simply don’t have traditional leagues,” said Frank Gurnick, director of soccer operations for Dakota Alliance Soccer Club in Sioux Falls, the larger of the two metro areas (by the U.S. Census Bureau’s designation) wholly contained within the state. The population of the Sioux Falls metro area has jumped from 228,261 to 276,730 -- substantial, but far below the population of any area that fields a team in the ECNL, MLS Next or the Girls Academy. Boise (metro population: 764,718) is about as small and remote as you’ll get in the big leagues.

Also in South Dakota, Rapid City has the Black Hills Rapids, so named not just because of the city name but also because they’re an affiliate of the Colorado Rapids. The metro population there is 139,074, barely half of the other metro in the state. And they are, unfortunately, all the way across the state from each other. Sioux City, Iowa, has a metro area that spills into South Dakota, and the state has nine micropolitan areas ranging in population from 15,000 to 42,000.

How about North Dakota?

It’s not impossible for a player to reach a high level from the state. Phil Boerger played for Division I schools Evansville and Syracuse and is now a goalkeeper coach at Toronto FC II. Jacob Weiler captained the University of Nebraska-Omaha team and has since moved into the lower reaches of German professional soccer.

“Jacob wasn't highly recruited to Division I and worked extremely hard to make that dream happen for himself,” said Shea Durham, technical director of Tri-City United Soccer Club in Fargo. “It is a more difficult path to go down coming out of Fargo, though, for sure.”

The lack of men’s Division I programs in the area doesn’t help. The big state schools have women’s soccer and had a moment of fame when University of South Dakota player Joana Zanin got a goal on SportsCenter a few years ago. 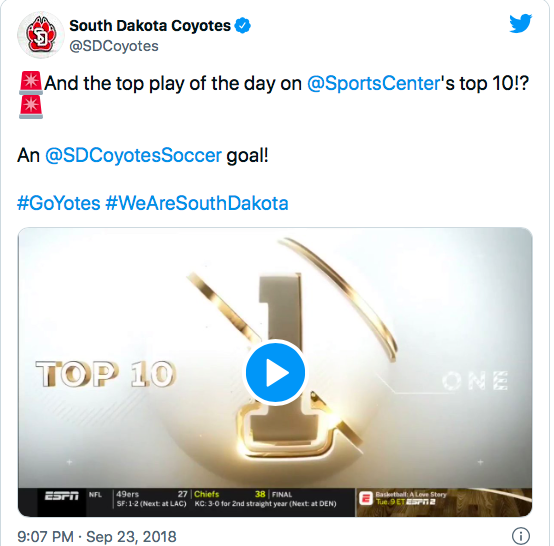 Dakota Alliance, Black Hills Rapids and Tri-City United all play in the Dakota Premier League, though the name “league” is only partially accurate. The DPL is a loosely organized set of weekends at a few different venues in the Dakotas and neighboring states. The two major South Dakota metros are split into East and West. Dakota Alliance hosted one of the East weekends Sept. 12. Clubs then head to Aberdeen, S.D., and Fargo, N.D. The West region spills into several states, with Black Hills Rapids hosting teams at Rapid City in between weekends at Billings, Mont., and Casper, Wyo.

Another pathway: The occasional Dakota Alliance player has individually joined a top-tier program like Sporting Omaha or Shattuck St. Mary’s, the latter of which is a boarding school.

And another: Tri-City United now puts its top teams in the Twin Cities Soccer League. As the name implies, the league is centered around Minneapolis-St. Paul, and there aren’t a lot of clubs farther than a 45-minute drive from either of the big cities. (The exception is Duluth, but that’s farther north than the Twin Cities, not much closer to Fargo than the league’s hub.)

Don’t look for home games in Fargo. The club’s teams travel to the Twin Cities for a weekend, squeeze in a couple of games, and drive back home.

Dakota Alliance made a similar trip. Gurnick is resistant to join any organization that requires any more travel than that.

“We’ve primarily been a tournament club because we don’t have the ability to get a league,” Gurnick said. “I don’t think a team from Sioux Falls should have to travel to St. Louis or Cincinnati to get into an alphabet league.”

Each club will have the advantage of a large player pool. In Sioux Falls, the area’s population growth has coincided with the dust settling from a merger of the area’s soccer organizations in the late 2000s. Tri-City United is the product of a more recent merger, with Tri-City Storm and Red River Valley United joining forces before the 2020-21 season.

“There just weren't many logical reasons not to -- maybe emotional, but not real logical,” Durham said. “We want to create a club that is community-driven, growth-oriented and person-centered. On that front, we are progressing well.”

Can consolidation and consistent scheduling put soccer in the Dakotas on the map? We’ll see. But the effort to meet the challenges with creativity is a start.