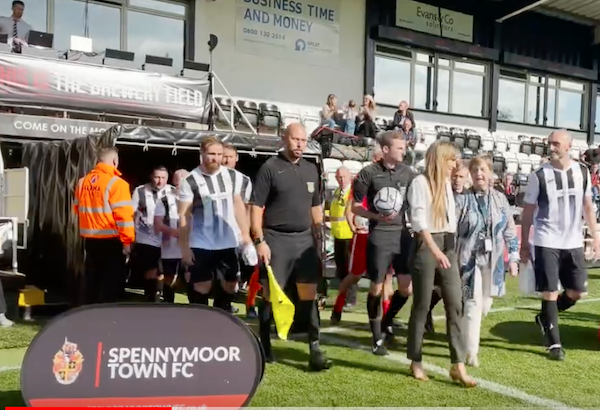 Maybe, amid the welter of La Liga, Serie A, EPL, Bundesliga, La Ligue and MLS games, you will have noticed that Spennymoor FC took on Team Solan a week or so ago.

But probably not. It was not a game that attracted much attention, Only 300 fans turned up at Spennymoor’s tiny Brewery Field (and how’s that for a soccer stadium name?). The stadium is that small because Spennymoor is a small town, way up there in northeastern England. Its soccer team plays in the National League North ... which, in the English soccer pyramid, is six levels below the Premier League.

None of that sounds too promising, so why, you will no doubt be wondering, am I making such a big deal of this Spennymoor vs. Team Solan game?

Because I genuinely believe what the BBC said about it, that it marked “an historic moment in British football.” I’ll go further. Not just British football, but all football. The entire sport of soccer, worldwide, could be fundamentally altered by what went on during those 90 minutes at the Brewery.

This was a game played by a mixture of old and young -- the oldsters with pro, some with international, experience. What made the game so special was a rule change that greatly restricted heading the ball: in the first half, heading was allowed only in the penalty areas, in the second half heading was banned completely.

I’ll ease into the story behind this no-heading experiment with a lovely human touch from Judith Gates, whose husband Bill Gates once played as a defender for Middlesbrough (over 350 games): “My husband will enjoy today but he won't remember it tomorrow.” 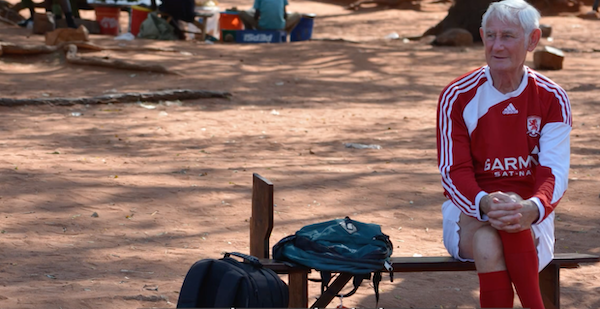 The almost breezy tone of that remark hides what must be a heavy sadness for Judith Gates to carry. In 2014 her husband was diagnosed with chronic traumatic encephalopathy (CTE). The main symptom being dementia. He now has almost no short-term memory. Dementia caused by his career as a pro soccer player?

Quite possibly, yes. The disturbing news about a link between playing soccer and late-life dementia problems is now common knowledge. Judith has watched her husband slip slowly but inevitably into the grip of severe dementia. Gates himself, aware of his illness, and its possible cause, has told his wife “I want my legacy to be that no other player or family go through what we are going through.” His wife responded by founding Head for Change, a charity with the aim of increasing awareness of the dementia problem and, of course, its links to soccer playing. It was Head for Change and the Solan Cancer Trust who organized the game.

Things went well on the field -- only once, three minutes into the game, was there an “illegal” header -- by former Leeds United player Mark Tinkler. The first goal, perversely, came from a header. But nine more non-headed goals followed in a 5-5 draw, and a shootout ensued.

But of course it was not the scoreline that mattered. A point had been made, a vital point: That soccer without heading would work, that players would have little trouble adapting, that the spectacle of soccer would shine through.

The game, of course, proved nothing. It was not a scientifically planned exercise. What it did do, one hopes, was to embarrass the soccer powers -- in England, the FA -- into at last taking serious action to reduce the amount of heading in the game. Up until now, the FA has made no changes in the game that would reduce the number of headers. Its requirement that the number of headers be reduced in practice sessions is both a feeble move, and one that seems, at the very least, laughably unenforceable.

In fact, the FA should have acted years ago, by staging a series of controlled test games -- similar to the one just played in Spennymoor.

It will, I fear, be too easy to dismiss Spennymoor 5 Team Solan 5 as an amusing diversion. Certainly the atmosphere at Brewery Field sounds like one of general bonhomie. And all the better for that, if it makes the FA realize that CTE involves people, families, that it is a horrible tragedy for all those involved.

While the FA -- and FIFA -- diddle and dawdle and take no meaningful action, they are exposing today’s players to dangers which could be appreciably lessened by sensibly reducing the role of heading in the game.

There is absolutely no excuse for not acting now. The call for “more research” is a blatant time-wasting maneuver. One that was cleverly and successfully used for years by the tobacco industry as it stonewalled accusations that its product caused lung cancer.

More than enough research has been already done to show that sport in general, soccer in particular, has a head injury problem. The attitude of soccer, now, should be one of caution. How sad, how just plain wrong, then, that the sport prefers to dodge the issue.

To return from the arrogance of the soccer authorities to the amiable Brewery Field. Just in case you’re wondering who won the headerless game’s shootout, who had the right to take home the Bill Gates Celebration Cup? Well, Spennymoor won, says The Daily Mail. The BBC says Team Solan did.

Something for everyone then. A little bit of human confusion. Actually, rather welcome when set alongside the dangerous confusion that soccer has created for itself by refusing to face up to the seriousness of its heading problem.