Kimmich and Beckham flout the risks of celebrity activism

Last week I wrote about how Bayern Munich's midfielder Joshua Kimmich  may not be the kind of bloke you'd want to have a beer with, but you'd almost certainly want someone with his winning mentality on your team, no matter how much his motivational mouth grated on your nerves. Following the weekend news that he's so far abstained from being inoculated against the Covid-19 virus, I'm no longer so sure. There's more than one way to be a team player.

The German tabloid Bild -- the kind of newspaper you'd think twice about using to line your kid's hamster cage for fear it would exacerbate the smell -- revealed that Kimmich had so far refrained from getting the vaccine, despite being a front man for the organization 'We Kick Corona.' Together with teammate Leon Goretzka, Kimmich received awards and plaudits for raising both money and awareness about the virus. One donation of half a million Euros went to UNICEF in order to provide vaccines for 132,000 people in developing nations.

Kimmich was interviewed on Sky Sports on Saturday evening after Bayern's 4-0 home win over Hoffenheim, where he stressed that he was neither an opponent of vaccines, nor a denier of Covid-19's very existence. It was just that he had "a few doubts" about the long term effects of vaccines. Which is his absolute right, no matter how dubious his science. Only, it's barely then credible to have been the public face of a campaign aiming to do the exact opposite -- encouraging people to get vaccinated.

"Long-term side effects of inoculations that first appear years later are generally unheard of," according to Klaus Cichutek, the head of the Paul Ehrlich Institute that's the regulator for vaccines in Germany. Side-effects from jabs, whatever the infection they're fighting, almost always appear and then disappear within hours or days of inoculation.

Bayern's former chairman Karl-Heinz Rummenigge for once hit the right tone when he said, "As an example to others, but also as a precedent, it would be better if he [Kimmich] was inoculated." Rummenigge's call at the start of the year for Bayern's players to be among the first to receive the vaccine was greeted with outrage -- how dare he suggest that already privileged professional sportsmen should be allowed to jump the queue. His justification -- that seeing such public figures inoculated would foster public trust in the vaccine -- seems with hindsight to contain some merit.

Kimmich's admission, at a time when his (inoculated) Coach Julian Nagelsmann has missed two games after contracting the virus, is now more likely to have the opposite effect. Around 30 percent of Germans remain unvaccinated, and inoculation rates are lagging just as infection stats are once again on the rise. Soccer fans have been allowed back into Bundesliga stadiums in increasing numbers over the past few weeks (depending on local state guidelines), and no one wants a return to last season's norm of empty stands. Yet without a sustained campaign of public health advice and responsible conduct from those in the public eye, it's hard to see this being anything other than a second long winter of over-stressed emergency rooms (see the UK, post-'Freedom Day') and restrictive measures. 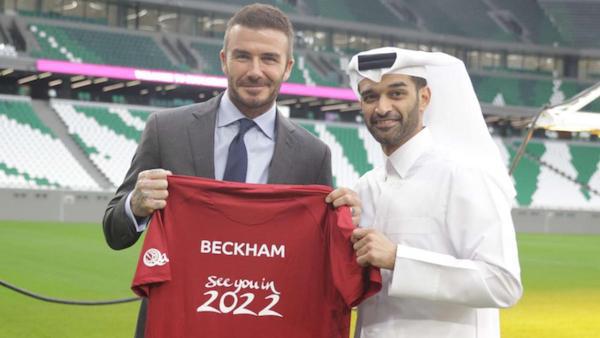 The burden of being a prominent figure under the public eye has also been highlighted this weekend by the former Major League Soccer midfielder David Beckham, revered for years as a gay icon and known for being commendably progressive in his attitudes towards sexual politics. Now, though, he's thrown in his lot with the state of Qatar -- the venue for next year's World Cup -- to become one of its many sporting ambassadors over the coming years. That is, he'll be working for a country that, as well as oppressing women's rights, workers' rights and having a zero tolerance policy on dissent, deems homosexuality to be illegal. A punishable crime.

A spokesperson for Beckham told the UK's Daily Telegraph that the player has "always talked about the power of football as a force for good. As we reach the one-year-to-go point, he joins the wider football community that is coming together for the World Cup 2022 and he’s looking forward to what he thinks will be a great tournament.” That's also known as being 'fully on message for vast amounts of cash,' with another UK newspaper speculating that over the coming decade Beckham could earn more than $200 million from the Qatari state for his ambassadorial role.

All celebrities are to a large extent playing roles when they're in the public eye, be it for altruistic reasons or commercial gain. I appreciate that it's not always easy to do the right thing, or even to be seen to be doing the right thing. All we're asking for here is some consistency. Don't front a 'We Kick Corona' campaign if you're not going to get the vaccine. Don't pretend you care about LGBTQ+ rights when you're shilling for a brutal regime that persecutes and imprisons people because of their sexuality. If you're not bright enough to further the cause, shut up and stay out of the spotlight.