In Carli Lloyd’s last international appearance, the USA excelled against South Korea, running out 6-0 winners. Starting eight different players from the first match against South Korea that ended in a 0-0 tie, Coach Vlatko Andonovski showcased his squad’s depth, and the players eased in seamlessly to the lineup. The USA played with more possession and quicker passing than last week — peppering shots in from around the box and also looking for Lloyd to get her goal. That big moment didn’t come, but fans and players from both sides gave her an exemplary sendoff when she was subbed in the 65th minute. Lloyd’s tears were met with a “thank you Carli” chant from the St. Paul crowd. 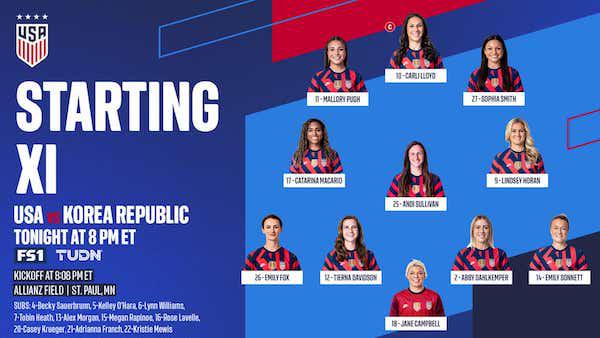 Like for Adrianna Franch in the first game of the series, the night was an exercise in concentrating-in-lull for Jane Campbell. She distributed well and answered when she was called on, but had little to deal with overall. Campbell had a nice save in the 49th minute. It was South Korea’s first and only legitimate chance.

South Korea was even less offensive on the night than they were last week, meaning less work for the U.S. backline. Emily Sonnett and Emily Fox advanced down the flanks and joined the U.S. attacks early and often. The center backs Tierna Davidson and Abby Dahlkemper communicated well and dealt with South Korea’s attacks easily.

The U.S. midfield found space better and moved for each other more than they did last week. Catarina Macario, in particular, was decisive in front of South Korea’s box, combining intricately with the forwards and Lindsey Horan. She also had a delightful nutmeg in the 36th minute which she paid for in blood. Macario also notched an assist from a corner for the USA’s second goal. Andi Sullivan played the 6 tonight, allowing Horan to advance and participate in the offense more — which she did plenty of. Horan will take the coveted No. 10 jersey after Lloyd’s departure. Sullivan swept up plays confidently but also demonstrated great vision pulling the strings out of the backfield — it was also her header that led to USA’s second goal.

This trio was energetic from the jump — particularly Sophia Smith. The ball was on Smith’s side for most of the match and she was responsible for many U.S. attacks. Carli Lloyd did well for the time she was on the pitch, creating a few good chances and trying her best to notch that last goal. Mallory Pugh thrived in one on one situations and delivered excellent service into the box.

Megan Rapinoe looked for Lloyd every time she got the ball but it was her exquisite outside-of-the-foot pass to Alex Morgan, who tucked away her finish, that hushed any USWNT doubters about the outcome  Rapinoe's finish on the USA’s fourth goal was superb. Rose Lavelle carried the ball well and added some good tempo to the U.S. midfield — she was rewarded by her hard work with a nice goal in the 89th minute. Lynn Williams added a sixth and final goal to cap off a great night in Minnesota.

TRIVIA: Carli Lloyd leaves as the second most capped player in U.S. history (316 appearances) and third on the U.S. scoring list (134 goals).