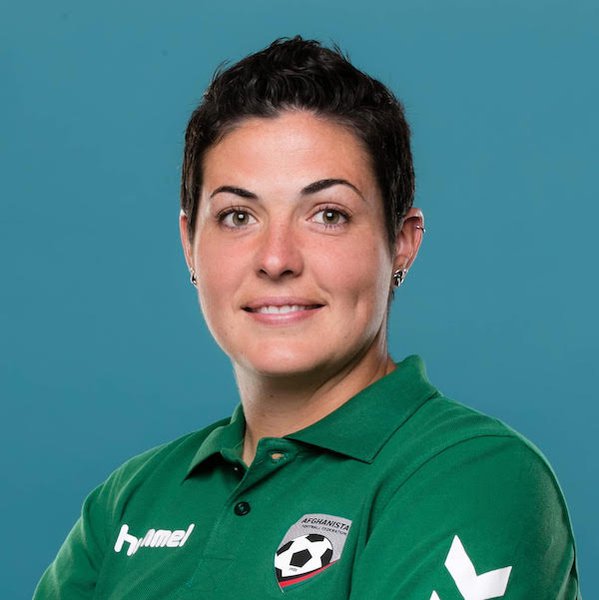 As a former Marine Corps officer serving two combat deployments in Iraq, Haley Carter knows the dangers of life in that part of the world.

As a former assistant coach of the Afghanistan women’s national soccer team, she knows how much those players sacrificed to get where they were.

In the chaos of the American withdrawal from Afghanistan last summer, Carter’s training as both a military officer and soccer coach spurred her to action.

The situation was dire. Among the many Afghans targeted by the Taliban, footballers -- women who had accomplished a great deal, on the world stage – were high on the list.

In the days before the Taliban rolled through Kabul, Carter began working with former Afghan national team coach Kelly Lindsey; Khalida Popal, program director for the squad, and FIFPRO, the worldwide organization for professional players. Spread across the globe, the group feverishly helped players gather the passports, identification cards and other documents they would need to flee the country.

Simultaneously, they negotiated with countries that might offer asylum to the women. Australia was the first to say yes. Officials quickly issued humanitarian visas, and wrote letters confirming those documents.

The Taliban took control on a Sunday. Now the challenge was clear: how to get the women – and as many of their family members as possible – through the streets, to the airport, and onto planes.

Carter’s group used WhatsApp to communicate with the Afghan athletes. Realizing that their phones could be taken at any moment, the women wrote key numbers on their arms, to re-initiate contact if necessary.

They brought phone chargers, and packed food and water for three days. But they had to travel as lightly as possible. And they had to move fast.

Some women were beaten by the Taliban. Some were poked with cattle prods. Others had their phones stolen.

The scene at the airport was chaotic. One group carried a sign with the name “John Basilone” – a World War II hero, whose name is revered by all Marines – and the date “November 10, 1775,” the anniversary of the Corps’ founding. That helped identify them to Marines guarding the airport gates.

Members of the first group were pulled physically through the gate. One of the Marines who helped them through was killed just days later.

Meanwhile, Carter – who holds a law degree from the University of Houston – and others pressed immigration attorneys, human rights advocates and Australian officials to continue approving and issuing visas.

Carter’s group was spread across seven time zones. Someone was always awake to monitor the constantly shifting scenario.

On the ground in Kabul, the 82nd Airborne and British officials helped over 200 people board planes, over 48 hours. Two dozen were Afghan women national team players. There were also referees, soccer federation officials, and family members.

When they landed in Australia, the Afghans were exhausted. They had endured beatings, and threats of suicide bombings. Bullets had whizzed overhead. Many left elderly families behind.

“Simply because they played football, these women were high-level targets,” Carter says. “They’ve lost everything: their families, their country, their identity as athletes. That’s devastating.”

But, she notes, the soccer players are not the only Afghans suffering. Many others left home in the middle of the night. They arrived in “countries they don’t know, with languages they don’t speak, and with people who don’t always want them there. It’s incredibly disappointing to see people not want to give back to the global community.” 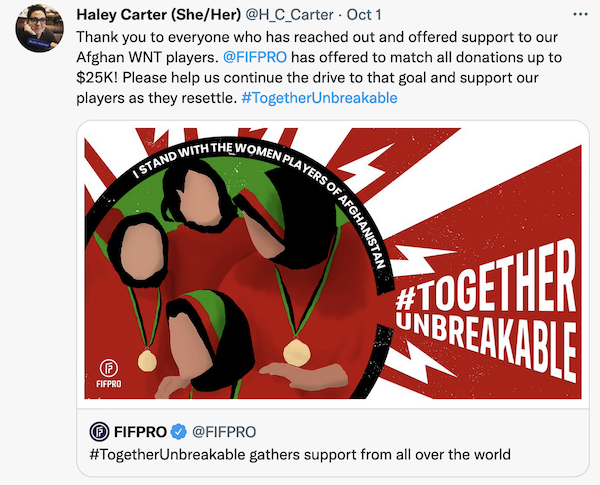 Carter’s message to Americans – who have reacted to Afghan refugees in a variety of ways, both welcoming and not – is: “Show compassion. Many of these people were interpreters, or served in special forces alongside us. Many of them have done more to serve the U.S. military than many Americans.

“No one wants to lose everything they’ve ever worked for. If there are refugees in your community, help them. If not, do what you can in any way to help. They need to rebuild their lives.”

Half a world away, a group of women soccer players and their families are trying to do just that.