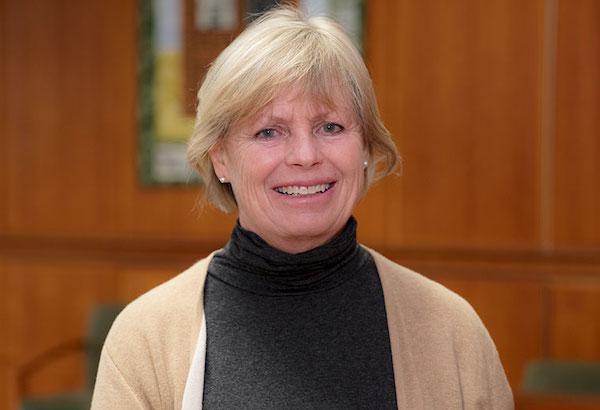 How does a soccer coach reach 600 wins?

“One game after another.”

That’s the formula Aliceann Wilber used. The winningest coach in NCAA Division III history reached that milestone this fall, when William Smith College beat Ithaca 2-0. It was also the 600th win for the Herons. Wilber founded the program in the 1980s, and has led it ever since.

“Soccer coaches are planners,” Wilber says, of her march to 600 victories. “We’re always preparing for the next training session, recruiting call or game. It’s not about the record. It’s about what’s next.” 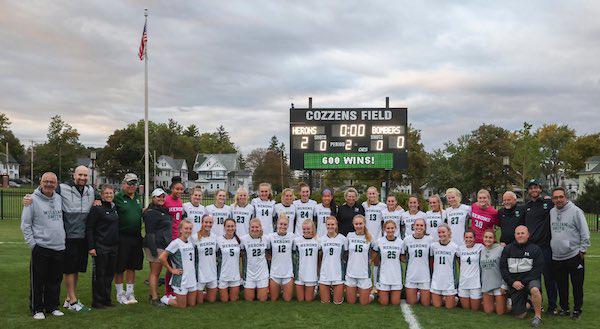 But growing up on a farm in Penn Yan, in New York’s Finger Lakes region, Wilber never planned to be a soccer coach -- or a coach of any kind. In pre-Title IX days, she played no organized sports. Instead, she ran track races against herself, “figure skated” wearing boots in the mud, and used a balance beam her father built in the living room.

Her goal before graduating from the State University of New York at Brockport in 1974 was to be an elementary school or adaptive physical education teacher. “I love, love, love children and teaching,” she says.

Wilber’s first job was at a K-12 school. She started its first interscholastic program for girls, coaching soccer, basketball, track and -- the only sport she knew -- volleyball. She taught herself the others.

Her father died four years later. Wilber returned home to help her mother with the farm. She completed her master’s degree, then got a K-6 teaching job in Penn Yan. She was also the high school volleyball coach.

If the elementary school had not closed, she would probably still be teaching there. But a part-time position at William Smith opened up. Wilber had enjoyed learning and playing soccer -- and met her husband playing in a summer league -- so in 1980 she began the varsity program.

“I didn’t know what I was doing,” she admits. “It was a struggle. And there was no money to recruit.”

But by the mid-’80s, the school had started to support women’s sports. She appreciated the positive environment, and the chance to “shape women’s lives, advocate for them, and help them grow.”

Her Herons teams “lost a lot in the beginning,” she admits. “But I’m stubborn. I kept at it until we scored goals, and then until we won games.” 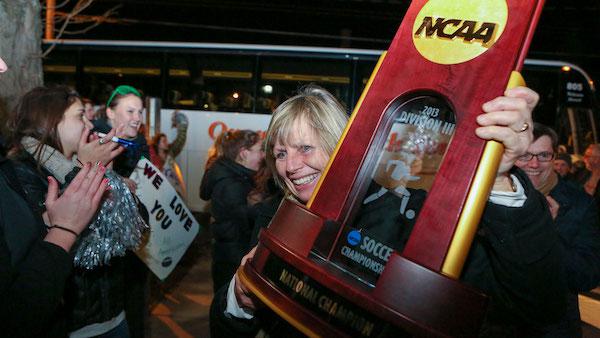 Aliceann Wilber guided William Smith to NCAA Division III national championship crowns in 1988 and 2013. The Herons finished runner-up to Messiah in 2019. After the 2020 season was canceled because of the pandemic, Wilber celebrated her 600th win during the 2021 season as the Herons compiled a 16-1-1 en route the NCAA tournament that begins next weekend.

Young players also learn more about “subtle, technical aspects. Soccer can be so nuanced. They’re watching high-level women’s and men’s games, and picking up a lot.”

Wilber often asks recruits to name their favorite team. If they don’t have one, she wonders how committed they are to learning about soccer.

Yet the veteran coach also notices a switch back toward athletes playing more than one sport. There is greater awareness of the cost of concentrating exclusively on one sport from a young age. Playing multiple sports pays off in a higher “athletic IQ,” she says.

Growing up, Wilber had no coaching mentors. Now in her late 60s, she is mentoring, supporting and advocating for younger female coaches. She is particularly aware of the toll her profession takes on coaches’ mental health.

As parents and players become more vocal about issues like playing time, Wilber says, coaches are caught in the middle. Administrators don’t always back up their coaches. Coaches -- particularly newer ones -- need to know that their mental health is as important as their athletes’.

She was an early and active member of United Soccer Coaches’ women’s college advocacy group. One achievement: changing “Coach of the Year” awards to “Staff of the Year.” As a head coach, she knows how hard assistants work.

COVID hit William Smith hard, as it did every college program. Wilber used those months to revamp the way she developed leaders. But the long time away from training and matches cemented her belief that the game is the best teacher, and important lessons like discipline can only be taught in person. “The team fabric was ripped away from all of us,” she says. “The social aspect is so important to why kids play. And the effects will be longer lasting than anyone realized.”

But as the Herons headed toward a “normal” season this fall, Wilber began doing what she does best: planning ahead.

“The next game!” she laughs. “The playoffs! We’re going full bore.”

While some of her colleagues -- women she began coaching with and against -- are retiring, Wilber has no such plans.

“I love the people I work with. We have a great coaching family here. My husband is so supportive.

“I always check myself: Do I still have the same energy? Am I still connected to my players? Can I make a difference? Am I still focused on whatever is next? That’s what coaching is all about.”

And -- as 40 years of William Smith teams, and all their opponents know -- it’s also about one win after another.

college women
6 comments about "Coach Aliceann Wilber on her 600 wins with William Smith -- and how the journey began".
Read more comments >
Next story loading