Roberto Abramowitz on USA-Mexico, El Tri fandom, and how MLS can catch up to Liga MX 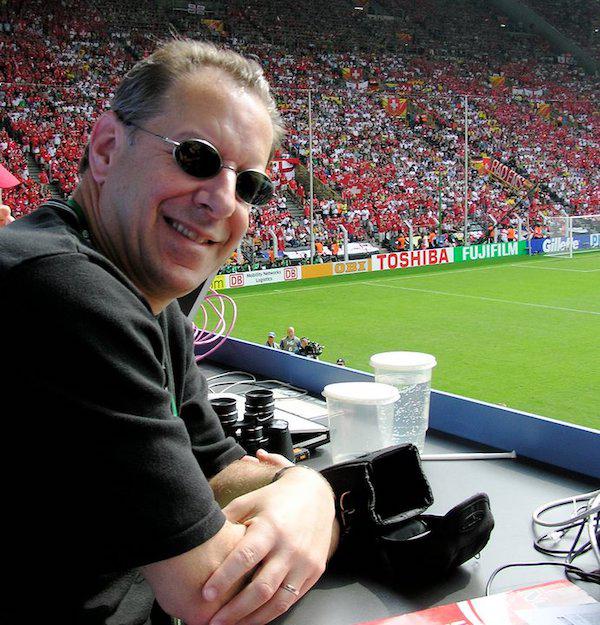 In the late 1950s, Roberto Abramowitz’s dad, Edward, was starting out as a jeweler in New York City and pursuing opportunities abroad. “As my mother tells me recently — because I did not know this — it was either South Africa, Israel or Mexico,” Roberto says. “My mother, who wasn't getting along very well with my father at the time, convinced him to go to Mexico because she figured, if shit hits the wall, I can get home a lot easier.”

It went well for Roberto in Mexico City, where he became infatuated with soccer and sports media. “The team I fell in love with in Mexico was Necaxa,” Roberto says. “I loved their uniforms — red and white striped shirts. Though I didn't know it at the time because [the TV] was in black and white — but I believed [the announcers].”

Roberto announced games while playing in the streets of Mexico as a kid. His sister's friend's father was an owner of Cruz Azul, which enabled Roberto to attend Los Cementeros games back when they were based in Jasso, Hidalgo.

His pursuit of a career in journalism was well served by having lived in the Mexican capital, a city with a rich newspaper culture of nearly two dozen dailies. After he returned to New York for junior high school, he begged his family to bring over days-old editions of Esto, his favorite newspaper, when they visited. At school, he was that classmate on the PA, playing Alice Cooper’s “School’s Out” on the last day of the year.

Now best known for TV and radio broadcasting -- including Spanish commentary for ABC's Monday Night Football, NFL on ESPN International and Deportes, and New York Knicks and NYCFC radio -- Abramowitz worked as a writer and assistant editor of Noticias del Mundo before serving two stints at El Diario/La Prensa. First as sports editor from 1983 to 1986, and then he returned six years later as Night Editor. Less than a year later he was promoted to metropolitan editor, and in 1993 to assistant to the publisher. El Diario, founded in 1913, is the USA's oldest Spanish-language newspaper. It was, along with Los Angeles' La Opinion, the largest-circulation Spanish-language daily in the USA during Abramowitz’s tenure, when he significantly increased El Diario's sports coverage with beat reporters and columnists.

“Being raised in a different culture with different people opens your eyes to a lot of things that most Americans don't get to see,” he says. “It gave me the ability to not only speak Spanish but speak it, read it, write it at a high-level and I've been able to earn my living in Spanish and it's all because of that.” 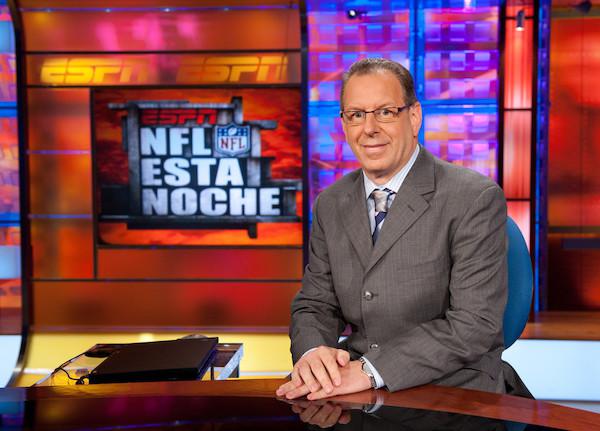 Abramowitz’s print media work included a two-decade stint as editor in chief of Futbol Mundial, a Sunday monthly newspaper supplement whose readership peaked at over 2.5 million. He broadcast all major pro and college sports (besides Major League Baseball) while at ESPN in 1994-2019. He currently serves as color analyst for the New York Jets Spanish-language radio, NFL play-by-play for CBS in Spanish via SAP, and is the Spanish-language radio voice of New York City FC since its MLS start in 2015.

SOCCER AMERICA: What was one of the most remarkable USA vs. Mexico match you covered?

ROBERTO ABRAMOWITZ: I was just looking at that game today. The Dos a Cero game in Columbus — not the ice bowl, the second one. Goals by Steve Ralston and DaMarcus Beasley, the day of the stare down by Oguchi Onyewu and Jared Borgetti. [Editor’s note: it was the Sep. 3, 2005 World Cup qualifier.]

It was a fun, crazy atmosphere. Just such a wild scene — so many American fans celebrating the entire game and being into it. It wasn't just like Sam's Army that was making noise and everyone else being quiet, which happens often.

There were a lot of Mexican fans there, despite the best efforts of U.S. Soccer. I came down at the end of the game and asked a Mexico fan where he's from. He said, "Well, I live in St. Louis. And I drove down for the game."

Then I asked him, how did you get tickets to the game? He says, "Well, there was really no other way of doing it, so I bought season tickets for the Columbus Crew for the express purpose of buying tickets for this game."

That's the level of passion that exists in Mexico and in Hispanic communities, and I think it's important for MLS to tap into that. They're good at doing a lot of things well in Spanish, they're better than most leagues. 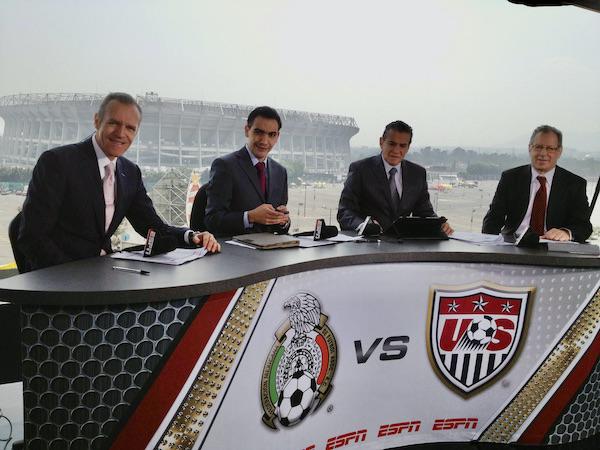 SA: What more can MLS do?

ROBERTO ABRAMOWITZ: You have to show the fan you're interested in them and they'll show interest in you. Targeting them as opposed to, 'This is our English campaign, how can we do this in Spanish, or, we're gonna spend $1 million in English and $100k that we'll throw into Spanish. We will google translate some social stuff.' That winds up turning everybody off.

If you're doing press releases and the Spanish one comes out three hours later and is missing stuff and is written poorly because you asked somebody who's not a journalist or their first language isn't Spanish just because that saves money.

SA: How do you rate the current status of the Mexico national team?

ROBERTO ABRAMOWITZ: They've had some important injuries that has limited them, but they're going to pretty much have everyone for their game against the United States on Friday. For the first time, Tata Martino can put together a lineup, if he desires, of Raul Jimenez in the middle, Chucky Lozano and Tecatito Corona up front. He hasn't had the opportunity to do that. It's going to make things difficult for the U.S., but at the same time it's going to make it a helluva lot more fun.

They play differently away than they do at home, and I don't think there's any reason to believe that the U.S. can't beat them again.

SA: What’s the relationship like between the El Tri and its fanbase these days?

ROBERTO ABRAMOWITZ: They're cautiously content. They're undefeated, they're in first place, they are where they think they belong. They're always the giants of Concacaf.

SA: Do they expect to win?

ROBERTO ABRAMOWITZ: They're going to expect a win [on Friday]. If they wind up losing or losing badly, for instance, then you're going to hear rumblings about Tata Martino's job security. There's going to be a lot of guys — Hugo Sanchez in particular — who probably will be saying, 'You should hire me and fire him.' Because this happens all the time, especially with a foreign coach. There's a lot less leeway for a foreign coach in Mexico than there is for a Mexican coach.

SA: I imagine it is frustrating to be an El Tri fan. Dominate regional competition only to fail in reaching el quinto partido since 1994.

ROBERTO ABRAMOWITZ: It's very frustrating, especially when you start thinking, Costa Rica got to the fifth game in 2014. In 2002, the USA got to the fifth game by beating Mexico 2-0. For all the stats about Mexico being better than the USA historically — although in this century the USA has a better record head-to-head — there's always that. In the World Cup in a knockout, the USA beat Mexico 2-0, and they have no answer for that.

SA: What can El Tri do to reach a high level? There's been talk about Mexico becoming a permanent Copa America participant to improve its World Cup preparation.

ROBERTO ABRAMOWITZ: If you do that, you're minimizing the importance of the Gold Cup. You're trying to grow the region up with you. The way I look at it is sort of like, 'Hey, I live on the poorer side of town, but the rich kids across the street invite me to play every so often. And I really want to belong to that family and not belong to my family. And I don't think that's the right thing.

It's important to elevate Honduras, Costa Rica, etc. As it becomes harder to compete against them you'll get better, but it shouldn't just be, ‘How do I help myself?’ It behooves you to help everybody else because that will help you.

SA: Talk about Latinos in the USA supporting the USMNT over El Tri?

ROBERTO ABRAMOWITZ: Other Latinos who aren't Mexican will normally support the USA over Mexico. If you're a Concacaf country, you especially will support the USA over Mexico. Part of the reason is Mexico's attitude over many many years of looking down at the region. This is a constant problem, done mostly by the media and sometimes by people who work for federations.

SA: How would rate the level of MLS vs. Liga MX?

ROBERTO ABRAMOWITZ: The improvements in MLS have made the league a lot closer in quality to Liga MX with the exception of the four or five top teams in Mexico — they can spend a lot more money. You can put together the top two teams in MLS and they don't have the budget that Monterrey has or Tigres has.

Once you get below around seven teams, it's even. That's why MLS has a puncher's chance of getting close to a Concacaf Champions League title. They're not going to win one until Don Garber and the owners in MLS that want to spend money can convince the owners that don't want to spend money that they have to open up their pocket books or leave.

You can say that you're getting closer as a league, but at the end of the day, it sounds foolish when you never win. Just getting close — like LAFC, RSL, and Toronto did — it doesn't cut it. It's not a competition right now. Until they start spending money and increase the salary cap that's not going to happen.

SA: Who do you fancy in Friday night’s matchup in Cincinnati?

Mexico likes to one- and two-touch all the way up the field — that's the way they play, they take very good care of the ball that way, or they try to.

The USA is a little more direct and they're going to try and use their speed and go and get behind, create a little chaos and hopefully get some set pieces and try to score off of set pieces, which they're very good at.

mexico
3 comments about "Roberto Abramowitz on USA-Mexico, El Tri fandom, and how MLS can catch up to Liga MX".
Read more comments >
Next story loading