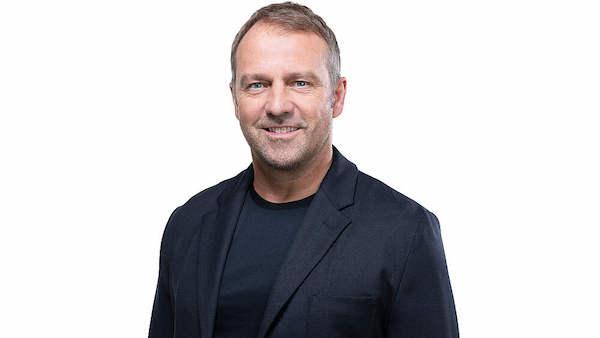 In Hansi Flick's first head-coaching stint, his team was relegated to Germany's fifth division, in 1998. But FC Bammental, where he took the helm after a playing career that included four Bundesliga titles with Bayern Munich, kept him on. From there, he moved to 1899 Hoffenheim, which he guided to the third division but was let go after failing to reach Bundesliga 2.

Flick took charge of the German national team in August, replacing Jogi Löw, who since winning the 2014 World Cup failed to steer Germany out of group play at the 2018 World Cup and lost in the round of 16 at the last year's European Championship. After a 6-0 loss to Spain in the Nations League and Germany's first World Cup qualifying loss since 2001 (2-1 to North Macedonia), Löw's 15-year Bundestrainer tenure finally ended.

Since Flick took charge of Die Mannschaft, after a two-year stint at Bayern Munich (2019-21) during which it celebrated seven titles, including the 2020 Champions League and Club World Cup, Germany became the first team to advance to the 2022 World Cup via qualifying. Germany's 9-0 win over Liechtenstein gave Flick the best start ever by a German national team coach -- 6-0-0. 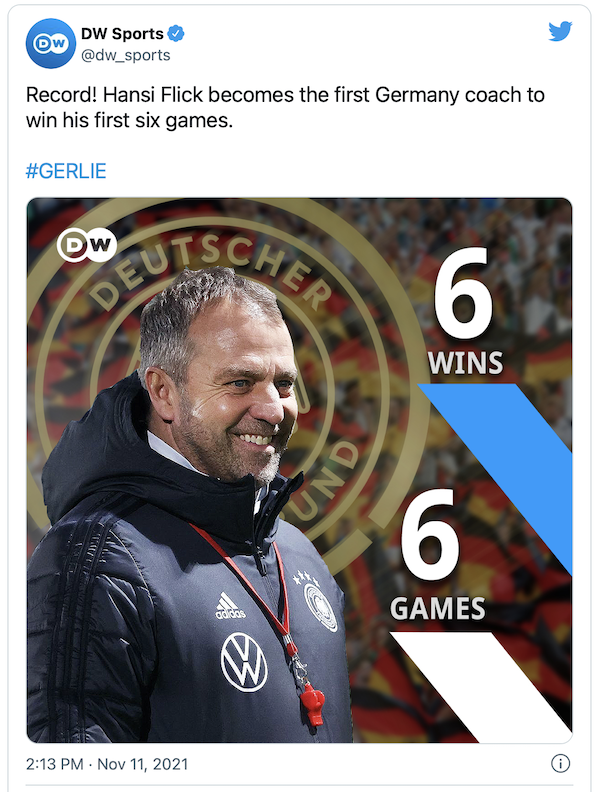 Flick's coaching career started in Bammental because he and his wife, Silke, decided to settle in her hometown when his playing career ended. They had met as teenagers in nearby Heidelberg, Flick's birthplace. He started out as player-coach for the minor league team and they opened a sports store: "Hansi Flick Sport und Freizeit," which they rans for 22 years till 2017.

Following his time at Hoffenheim, Flick had short stint at RB Salzburg under Giovanni Trapattoni. In 2006, Löw upon succeeding Jurgen Klinsmann  as Germany coach, brought Flick in as an assistant. Together they celebrated 2008 Euro runner-up, 2010 World Cup third place, and the 2014 World Cup title, after which Flick took on an administrative role with the German federation (DFB) before returning to Hoffenheim as general manager.

Bayern hired Flick as assistant coach to Niko Kovac, whom Flick replaced in November of 2019. By the end of the 2019-20 season, Flick had guided Bayern to a haul of six trophies that included its second Bundesliga-German Cup-Champions league treble -- while Bayern averaged more than three goals per game.

The 2020 UEFA Coach of the Year announced his departure from Bayern in April -- shortly after Germany's loss to North Macedonia. A few weeks later, the DFB announced that Flick would take charge of the national team in August. (Flick stayed on while Bayern clinched its ninth straight Bundesliga title.)

So far, the 56-year-old has been hailed for integrating young German talent into the team, in the wake of Löw's stubborn loyalty to aging stars. Winning six games while outscoring foes 27 to 1 and clinching World Cup qualification with two games to spare has created an enthusiasm about the team that steadily waned since the 2014 World Cup title.

"Flick demonstrated during his time at Bayern Munich that he knows how to connect with any personality type using his friendly jovial manner — be the player young or old, from the bling-bling faction, a fashion diva, a skilled technician or a journeyman battler," wrote Tobias Oelmaier of DW.com. "Whichever the personality, Flick found a way to get the best out of each individual — and rewarded himself with six titles in a single season."

He's been called "der nette Hansi" (Mr. Nice Guy). But he also has a tough side, as Bild reporter Thomas Sulzer, who's known Flick for 25 years, explained:

"When a shoplifter grabbed something from his store, he grabbed the thief, took him to the street, and held him until police showed up."