Coming off its 2-0 win over Mexico on Friday, the USA charged out confidently against the Reggae Boyz and took an early lead when Tim Weah finished off a slick combination of passes that involved seven U.S. players. The U.S. remained the dominant team but failed to change the scoreboard, and the complexion of the game changed after Michail Antonio's 22nd-minute long-range strike. 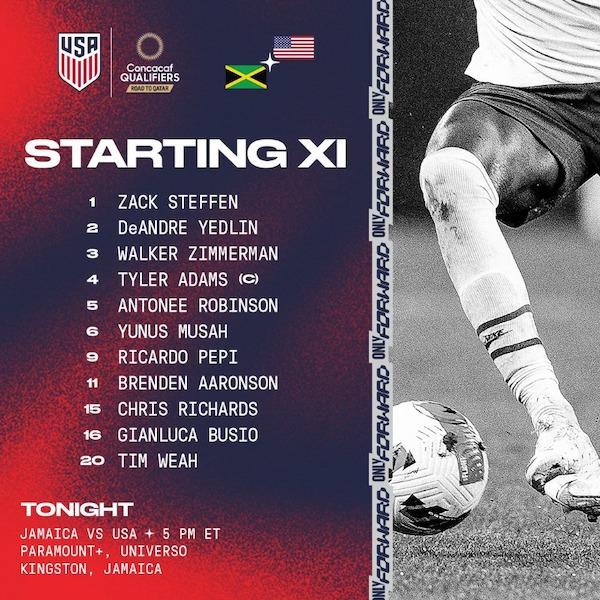 Jamaica's only first-half shot flew over Zack Steffen more than from 30 yards out. His one save was an easy one. Ravel Morrison shot low down the middle from 24 yards in the second half. Walker Zimmerman intervened after Steffen's pass in the 88th minute was picked off by Morrison. In the 84th minute, Steffen punched clear a corner kick that resulted in another corner kick. He punched away a low cross in stoppage time.

Central defender Walker Zimmerman's heading prowess put an end to most of the Reggae Boyz's attacks as they stubbornly pumped long balls into the U.S. half. His solid tackling included ending Jamaica's first second-half foray after a U.S. midfield giveaway. His central partner Chris Richards was part of the goal buildup and ended Junior Flemmings' venture near the goal area in the 84th minute. Richards covered for constantly attacking Antonee Robinson at left back. Robinson's poor touches in attack included a bang out of bounds when Brenden Aaronson served him near the goal area early in the second half and ending a stoppage-time passing sequence with a mis-trap to give Jamaica a throw-in. At the other end, he gifted Bobby Reid a shot from five yards out in the 53rd minute that Robinson's his teammate skied over the crossbar. Robinson saw plenty of the ball moving down the left flank but rarely did his delivery land conveniently for a teammate and often went to a Jamaican -- and out of bounds on the other end in the 87th minute. Right back DeAndre Yedlin, who won an early battle with Reid and stifled left attacks, relayed Yunus Musah's pass to Richards ahead of Tim Weah's goal.

Central man Tyler Adams disrupted Jamaica's attacks all over the midfield and deep in the U.S. half. He pounced on a Jamaican clearance to set off the buildup on the USA's goal. Yunus Musah lost the ball three times within a couple minutes in the first half but when he regained his composure -- turns out Musah was suffering from strep throat and had to be subbed in the 66th minute -- provided some of the more clever midfield play. Early in the second half, he resisted a predictable pass to the flank, cut through the middle and set up Gianluca Busio for a long-range shot that flew just high. Musah sent the ball for Yedlin to switch flanks on the goal buildup and the 18-year-old's combining with the 21-year-old Weah looks to be a promising partnership in the making. Busio contributed to the USA's 68% edge in possession and he fed Weah in the goal buildup.

Ricardo Pepi's best shot was blocked by a defender and he struggled to control a couple passes that should have been delivered more accurately. After his attempt to settle Brenden Aaronson's pass failed, Pepi stayed alert and beat a Jamaican to Adams' interception. Pepi then flicked the ball to Musah and reappeared for a one-two to assist on Tim Weah's goal. Four Jamaicans and the keeper couldn't stop Weah on his path to scoring. Aaronson, although a player in need of more polish and precision, proved problematic for the Reggae Boyz and his harassing of defenders trying to play out of the back contributed to the USA's goal.

Coach Gregg Berhalter's subbing proved the USA was aiming for a road win in high-humid Kingston against a Jamaican team whose postgame reaction implied they were pleased with a point. Christian Pulisic was chopped down immediately on his two forays -- far enough from the goal that the free kicks couldn't be shots. He took both and Jamaica cleared. Paul Arriola's hopeful diving header was deflected for a corner kick. Shortly after entering, Kellyn Acosta intercepted a pass after Robinson coughed up the ball.