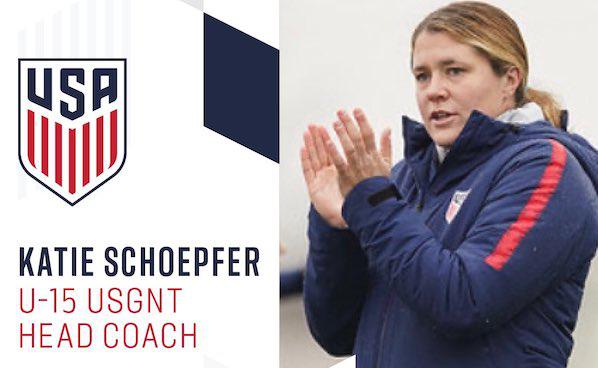 Katie Schoepfer, who has spent the last seven years in Massachusetts youth soccer, most recently as technical director at South Shore Select, is the new head coach of the U.S. U-15 girls national team.

During the last three years, she has served as an assistant coach with the U-17 and U-20 U.S. women and U-16 girls national teams, and before joining South Shore Select served as assistant director of coaching at Valeo FC. She's also spent six years as a college assistant coach, with Boston University and College of the Holy Cross.

The Connecticut product's professional playing career included four years with the NWSL's Boston Breakers after playing for the Breakers under Tony DiCicco in the 2011 WPS season. She earned all-American honors at Penn State and was in U.S. youth national team player pools from U-17 to U-23.

Her first training camp with the U-15s is scheduled for January 2022 to prepare the team for future Concacaf U-15 Girls Championship.

“As all of our youth national teams get back on the field, we’re excited to bring Katie on board to lead the U-15 program,” said USWNT General Manager Kate Markgraf said in a press release. “She’s very familiar with our youth national teams setup and after a top-notch playing career, has risen through the youth coaching ranks. We’re confident she’s ready to take the next step in her coaching career and she’s the perfect person to guide our youngest national team prospects.”

The appointment comes a day after U.S. Soccer announced as new U-17 women's national team coach, Natalia Astrain, with whom Schoepfer will work closely "maximize the development, evaluation and movement of players between the age groups for training camps and matches during the two-year cycle."