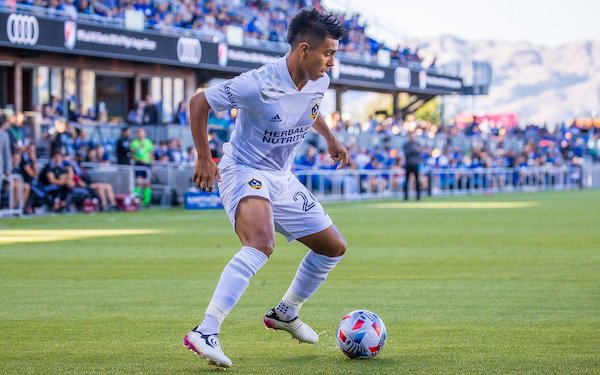 Greg Vanney wanted the LA Galaxy to become younger and more dynamic, and the club's acquisitions for the 2021 season -- French wingers Kevin Cabral and Samuel Grandsir, midfielder Rayan Raveloson and center back Sega Coulibaly, and Serbian forward Dejan Joveljic, in particular -- were to that end.

The Spaniard brought stability to LA's attack and a working knowledge of Vanney's core principles, product of two years in the system at Toronto FC. His most valuable contribution, ultimately, might be as mentor for Efrain Alvarez.

The 19-year-old midfielder has been revered since his mid-teens -- former LA forward Zlatan Ibrahimovic in 2019 declared Alvarez “by far the biggest talent from everybody” in MLS -- but he's still working to fulfill all that promise. Vazquez is helping him get closer.

“I knew Efra when he was a little tiny kid playing in the Chivas USA Academy and watching him from a distance,” said Vanney, who was Robin Fraser's chief assistant with the Goats in 2011-12. “I had my impressions coming in, and when I sat down with him, I think the first five words out of his mouth were 'I want to go to Europe.' And so I looked at him, and I thought, OK, I want to support that. But we have a lot of work to do.”

Alvarez needed to be better physically -- “his capacity to cover ground, his fitness level, his strength” -- and to put his skills to better use. Vanney was impressed by his work toward that end.

“He's super technical and talented, and his vision in the game is excellent,” Vanney said. “His left foot is like a wand, and he can do amazing things. So the things that we're talking to him about, it's consistency of performance. It's having a high-level understanding and execution in between the really brilliant moments that he has, but it's it's also defending at a high level. Doesn't have to be an amazing defender, but his defensive positioning, reading, making sure that he's reliable in whatever role, whether it's as a 10 in the middle of the field or as that inverted winger off the right, that he has a good understanding and can carry out his responsibilities there on a consistent basis. I thought he made a lot of growth on that side this year, and a lot that has to do with just being able to do the physical work of defending and attacking, and he was able to get to that.”

Vazquez's mentorship has been invaluable.

“Victor is a model for Efra,” Vanney said. “Victor has a way of organizing the game ahead of the game. He knows where the pass is going to go. He knows what the final action is going to look like. He's positioning players, and that's something that I want Efra to develop, which is don't react in the moment, but actually set up the moment to be the moment that you want it to be to punish the other team. Efra is learning how to do that, [learning to] see the action before the action actually gets to you.”

“We love his trajectory,” he said. “We like what he's doing. He's hungry, he wants to play every minute, and I would like to think he's going to take another step forward in that. We'd like to increase his numbers in terms of goals and assists and impact plays as he continues to grow. He's certainly moving in the right direction in every capacity, I think.”