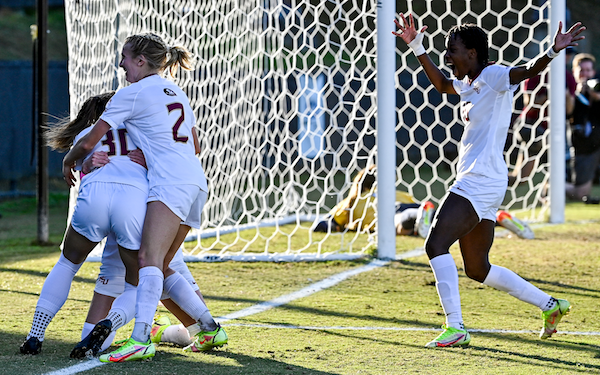 Unseeded Santa Clara is returning to the Women's College Cup, which it will host Dec. 3-5, after defeating No. 1 regional seed Duke, 2-1, on Friday in Durham.

The Broncos won the national championship in the spring, beating Florida State in a shootout in the final. The Seminoles will also be back at the College Cup.

Santa Clara took command thanks to two first-half goals from Izzy D’Aquila and Kelsey Turnbow and held off the Blue Devils in the second half.

The Broncos will be making their 12th trip to the College Cup.

No. 1 Florida State is headed to the Women's College Cup after being Michigan, 1-0, on Beata Olsson's golden goal.

The Seminoles had a chance to win the game in regulation, but U.S. international Jaelin Howell's penalty kick was stopped by Michigan keeper Hillary Beall.

FSU won the game with 55 seconds left in the first overtime period when Canadian Gabby Carle kept Howell's cross in play, allowing Olsson to tap the ball into the empty net.

By contrast, Rutgers is a relative newcomer, booking only its second ticket to the College Cup with a 4-2 shootout win over SEC powerhouse Arkansas after their battle of No. 1 and No. 2 seeds ended in a 2-2 draw at Yurcak Field.

The Scarlet Knights’ only other appearance in the national semifinals came in 2015.

Goalkeeper Meagan McClelland recorded seven saves for Rutgers and stopped the Razorbacks' first shootout try before stepping up to drill home her penalty kick in the third round of the shootout.