The USA opened its two-game tour of Australia with a 3-0 win over the Matildas before 36,109 fans at Stadium Australia in Sydney, a record crowd to watch the Matildas on home soil. The USA took advantage of Australia's teenaged center backs to score within 24 seconds -- its third-fastest goal ever -- and then again to add a second goal early in the second half to take command. In between, goalkeeper Casey Murphy kept the USA in the game with a series of excellent saves. 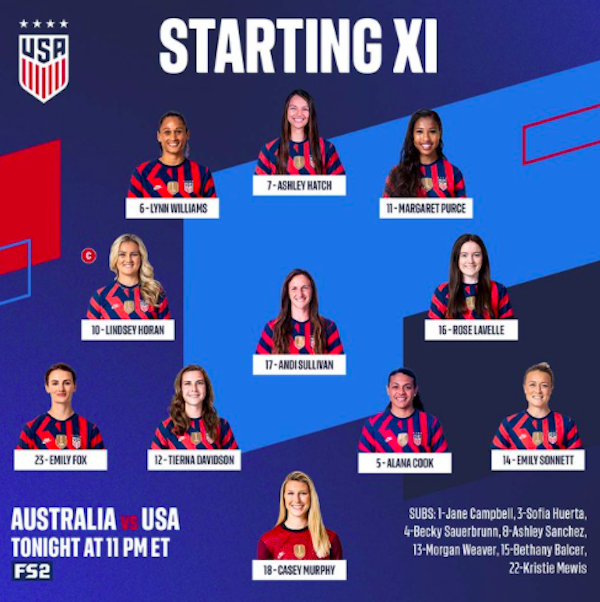 It's rare that a U.S. goalkeeper has as much to do Casey Murphy had in the first half, and she kept the USA in the game with a save on Sam Kerr in the 33rd minute and two better saves on Kerr and Caitlin Foord in the 45th minute. The 6-foot-1 Murphy, who finished with eight saves, controlled everything in the air, exuding confidence in her international debut, as good a performance as the USA has gotten in goal in a long time.

Tierna Davidson organized the U.S. backline and did well to win balls and push the U.S. attack. Her center-back partner, Alana Cook, showed a lot of composure in the biggest game of her young international career. In the first parts of the first half when the USA was in control, Emily Fox caused problems for the Matildas down the left side. She played an excellent angled ball to Lynn Williams, whose pass Emily Sonnett failed to connect on at the far post. After being beaten by Foord on the endline in the 38th minute, Sonnett was lucky Kyah Simon missed a sitter from inside the 6-yard box. Australia's best chance in the second half by Mary Fowler came after Sonnett turned the ball over in the left side.

Lindsey Horan's turnovers gifted Australia several chances in the first half, but she came out in the second half and was the best player on the field, rewarded with a penalty she converted herself to make it 3-0 in the 68th minute. Rose Lavelle missed badly from close range after stealing the ball in the 5th minute, but she made up for it by putting away Midge Purce's pass in the 49th minute. Andi Sullivan took a beating from the Matildas but managed to hang on until the final three U.S. subs came on the 84th minute.

It took all of 24 seconds for Ashley Hatch, starting in place of the injured Catarina Macario, to score in her first start for the USA, doing well to control Lynn Williams' header and score on a volley. After a very quiet first half, Midge Purce turned on her jets and brushed aside her defender, 19-year-old Courtney Nevin, to set up Lavelle for the second goal.

In her first U.S. appearance in almost three and a half years, Sofia Huerta came on for Fox after the break and slotted in an right back, where she won a ball that started Purce on her run down the right wing on the second U.S. goal. One of three late subs to make their international debuts, Morgan Weaver gave the USA some needed energy late in the game.

TRIVIA: For the first time since April 9, 2013, the USA deployed a starting lineup with every player under the age of 30. Lynn Williams was the oldest starter at the age of 28.