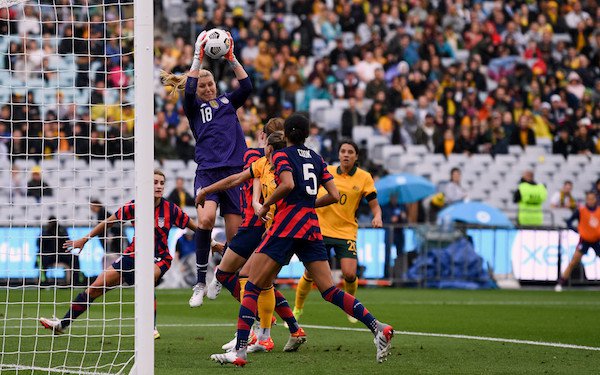 After the USA's 3-0 win over Australia on Saturday in Sydney, U.S. coach Vlatko Andonovski gave newcomer Casey Murphy perhaps the biggest compliment you can give a goalkeeper.

The 3-0 scoreline doesn't reflect how desperate the situation got for the USA late in the first half, hanging on to a 1-0 lead from a goal after 24 seconds.

Loaded up front with Mary Fowler, Caitlin Foord and the great Sam Kerr, the Matildas were carving apart the U.S. defense. When they weren't breaking lines, the U.S. midfield -- captain Lindsey Horan in particular -- was giving them the ball in dangerous positions.

Australia could have scored two or three goals but for Murphy, and the one time she was beaten, Kyah Simon missed a sitter from inside the 6-yard box.

Kerr was twice foiled by the 6-foot-1 Murphy, on a shot from distance in the 33rd minute and again in the 45th minute with a foot save. Shortly after that, it was Foord's turn, and the Arsenal forward's shot headed to the far corner was tipped away by Murphy with one of her eight saves.

"The last 10 minutes of the first half we basically relied on Casey," said Andonovski afterwards. "We needed her there, and when we needed her the most she came up huge. I thought it was good for her. She gained a lot of confidence."

The USA used the break to regroup, and came out a different team in the second half. It got a second goal in the 49th minute and cruised to a 3-0 win.

The cap was the first for Murphy with the USA, but she has been in camp with the team before, beginning with a pair of friendlies against China in June 2018, following her senior year at Rutgers. Shortly before, Murphy moved to France, where was named the French league's top keeper in her one season with Montpellier. 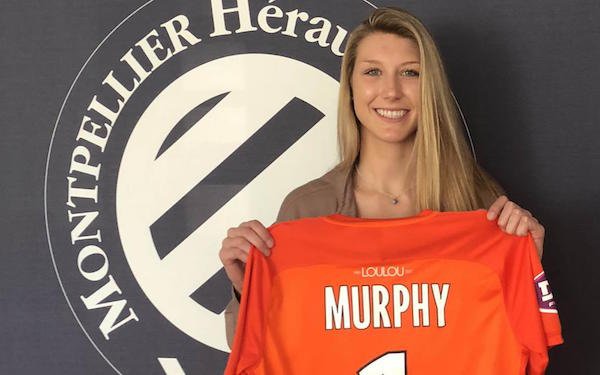 In 2021, Murphy joined the North Carolina Courage and tied Adrianna Franch’s NWSL record for most shutouts in a season with 11. The Courage, the 2018 and 2019 NWSL champion, fell in the quarterfinals of the playoffs to the eventual champion Washington Spirit, 1-0, in overtime but not before Murphy made 13 saves.

The USA only had a couple of days of practice before the first of two games against Australia with a team that featured only four 2019 world champions in the starting lineup.

"We tried a few different styles in building out," Murphy said on a Zoom call after the game, "and if it didn't work, we skipped it and moved on. Obviously, it was a lot of trial and error. Once we found something that worked, we kept with it."

One of the biggest challenges was the atmosphere. The match drew 36,109 fans at Stadium Australia in Sydney, a record crowd to watch the Matildas on home soil.

"I thought this was a great experience for Casey," said Andonovski. "It couldn't get any better for her, playing in front of a great crowd, very loud, very stressful, against some of the best forwards in the world. What else can you ask for? She came up big."

Goalkeeper has not generally been considered a position of concern for the USA as it builds toward the 2023 Women's World Cup in Australia and New Zealand. But Alyssa Naeher, who hasn't played since the Olympics, is 33, and Adrianna Franch, who replaced Naeher when she was injured in the semifinals against Canada, is 31.

At 25, Murphy is a year younger than the two other keepers on the current trip, Jane Campbell, who has seven caps, and uncapped Bella Bixby.

What stood out about the New Jersey native -- Bridgewater-Raritan High School and the PDA Slammers -- wasn't just her shot-stopping. It was, despite her young age, her command of the area and the confidence she exuded.

"I feel comfortable saying that even though this is the first cap for Casey," said Andonovski, "it will be just one of many."