USL Championship: Watch out for the Orange, the unfancied and 'disrespected' finalist 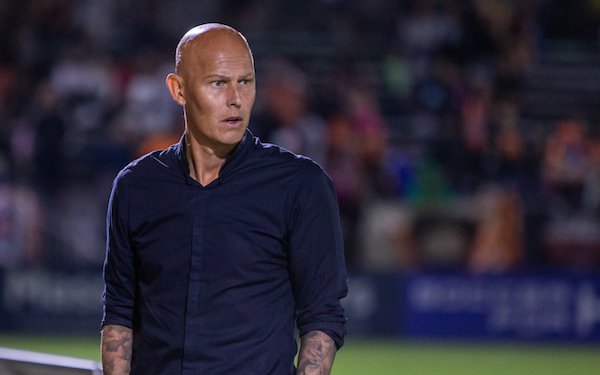 The Tampa Bay Rowdies were supposed to be here, playing for the USL Championship's championship after marching to the best record in America's second tier behind some of the biggest names in the league, then dispatching one foe after another in the playoffs, the last after falling a couple of goals behind.

They've won 26 of 35 outings this year, postseason included, after claiming a share of the title last year when a bunch of positive Covid-19 tests killed the final, are widely expected to be celebrating when the final whistle is blown in Sunday's 8:30 p.m. ET title tilt on their home field. ESPN and ESPN Deportes will provide coverage.

Their foe? Orange County SC was bumbling along at .500 with three weeks to go in the regular season following a 4-8-4 spell over nearly three months erased a strong start and cost former San Jose Clash/New England Revolution attacker Braeden Cloutier his job as head coach. The “only professional Southern California” team to reach the playoffs, as the billing goes, was unfancied and “disrespected,” an afterthought in the West that maneuvered through two penalty-kick shootouts -- over Oakland Roots and San Antonio FC -- to get here after favorites Phoenix Rising and El Paso Locomotive were ousted by others.

Watch out for the Orange.

Under former captain Richard Chaplow's stewardship, at first as interim boss, OCSC has been the hottest team in the USL's top division for the past month. It has reeled off an eight-game unbeaten streak -- six wins and the two playoff draws leading to the PK conquests -- despite scoring just eight goals and never building a margin greater than a goal.

The club, which debuted a decade ago as the L.A. Blues, was briefly affiliated with Los Angeles FC, and now has a development academy and working relationship with Scottish giant Rangers FC, has survived as much as it has prospered. This is where it's supposed to end, of course.

Chaplow's message: Don't count on that.

“I always feel from experience, as well in England with the playoffs,” Chaplow, who spend most of his career in England's second-tier Championship, told Soccer America, “that the team coming in with the most momentum is often the most dangerous team. Rather than sometimes teams that have been in there all season but don't have that hot streak, so to speak. Just being consistently solid.

“[We're] the team with some good momentum behind us.”

OCSC has conceded just twice in its eight-game run, equalizers in stoppage against Las Vegas -- quickly answered by Haitian forward Ronaldo Damus, its top scorer -- in its penultimate Pacific Division match and midway through the second half of last weekend's Western Conference title-game triumph over San Antonio. Things started clicking after a 4-1 loss at Tacoma on Oct. 9.

“We've really come together,” said midfielder Dillon Powers, the 2013 MLS Rookie of the Year acquired just as Chaplow, an assistant coach after retiring as a player in 2018, took the reins in mid-August. “The group responded very well [to the Tacoma defeat]. That's a moment that it could go one way or another, and we chose to go up.”

Chaplow, a center back whose final on-field performance was in OCSC's loss to Phoenix Rising in the 2018 Western Conference final -- the furthest the club had advanced until now -- changed the group's mentality and attention to detail when he took over after a 1-5-2 run (0-3-1 at home) followed a 6-2-3 start..

“I felt we needed to get back to basics, if you will, both on the field and off the field,” he said. “I felt we needed to have better habits and [be better] professionals. I [emphasized] simple things: timekeeping, keep the locker room clean, turn in your health and wellness scores in the morning, doing your weigh-ins and all of them sort of things.

“They might seem like little pointless tasks or things that don't carry as much weight if you don't take care of them, but for me, that discipline off the field brings discipline on the field, and that's something we hammered home to the group. And we weren't lenient on it at all. Fall in line or go home, so to speak.”

Captain Michael Orozco, an Orange County native and former U.S. national-teamer who played nearly a dozen years in Liga MX, saw it transform the side.

“[Chaplow] changed the mentality part, the work ethic everyday [in which] you train like you're going to play, guiding us every session and not letting any details slip,” he said. “And that's why the team today fights and is very compact and has one goal in mind, which is winning every game. We work like it's the last minute there is in our lives in the game. ... The gaffer changed our culture.”

Chaplow also minimized the rotation in the nets and along the backline, in use the first two-thirds of the season, giving German goalkeeper Patrick Rakovsky the No. 1 job and steadying things at the back with club veterans Orozco and English-born Irishman Rob Kiernan in the middle and Kevin Alston, the former New England Revolution standout, on the right. Brent Richards, one of 11 newcomers making significant contributions, got most of the time on the left.

Powers and fellow Notre Dame alum Tommy McCabe, who signed with Orange County after he was released by FC Cincinnati after the 2020 season, have been pivotal in central midfield, and Damus has been potent up front with 16 goals, including both playoff strikes. Dane Thomas Enevoldsen, who struck 21 times in 2018, offers a veteran presence off the bench.

“I think what we are missing right now is we don't seem to be taking our opportunities,” Chaplow said. “We have plenty of moments in the game where we can maybe put the other team to the sword a little bit more. And we're just not clicking right now in those moments. ... I feel like it's a lot easier to set a team, get them organized and hard to break down, and then go from there, and that's ultimately where we've gone with it. We're good at it, and that's the reason we are going to the final and have advanced as best of the West.”

Will that be enough against a Rowdies team that features four players on the All-USL Championship side: goalkeeper Evan Lauro, defenders Forrest Lasso and Aaron Guillen, and forward Sebastian Guenzatti? Lasso is a finalist for the league's top defender, an honor he won last year; Lauro is up for the goalkeeper award; and Guenzatti, a Uruguayan with 21 goals, is an MVP finalist.

(No Orange County players made the USL's first or second team. Orozco called it “a little bit of disrespect,” said he didn't “think it was fair,” and charged that “they [don't] take Orange County serious.”)

Scotsman Neill Collins is up for Coach of the Year. He and Chaplow partnered in the middle of Preston North End's backline a decade or so ago, competed against each other “tons of times,” as Chaplow put it, in the Championship, and remain close friends. They've been texting throughout the playoffs, rooting for each other's side, hoping for a chance to face off.

“Neil's a great guy, fiercely competitive in everything he does,” said Chaplow, who reached out to Collins for insight before making the move to Orange County in 2016, four months after Collins arrived to play in Tampa. “We know his team has those values as well. ... I've always kept an eye on Tampa because he's in charge there and he's doing a great job, so kudos to him.

“But we're hoping to come to town and make it a difficult evening for him.”