David Ochoa: 'I think it's funny we're shutting a lot of mouths up' 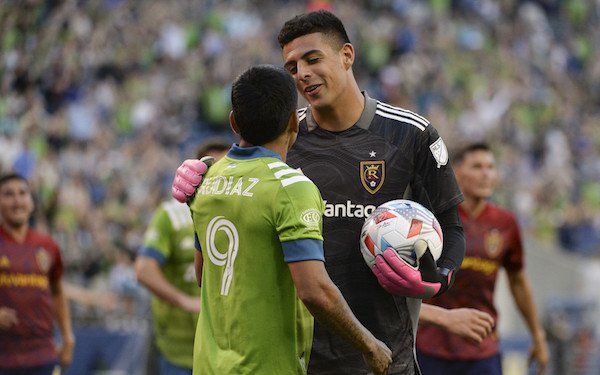 David Ochoa is clear about one thing:

"I enjoy being the villain."

In his first season as a starter for Real Salt Lake, Ochoa has certainly developed a reputation for irritating opponents and their fans.

The 20-year-old goalkeeper was speaking after RSL ousted the Seattle Sounders in the final game of Round One in MLS's playoffs.

'They didn't test me.' RSL did not get off a shot in 120 minutes, but it advanced to Sunday's Western Conference semifinals at Sporting Kansas City when it beat the Sounders, 6-5, in a shootout after the match ended in a scoreless draw.

Seattle finished with a 21-0 edge in shots. Its best chance came in the 73rd minute when Raul Ruidiaz rattled a volley off the crossbar. Not that Ochoa was bothered.

"They didn't test me," Ochoa said on a Zoom call on Friday. "I would even bring up Ruidiaz's shot that everyone's talking about. It's a good shot, but I had it covered. He's not beating me from that far. It's hitting the top of the crossbar."

Ochoa didn't exactly have a lot to do. He made only three saves during regulation and overtime and went the wrong way on Seattle's first five shootout attempts before stopping Kelyn Rowe in the sixth round.

"I don't think they had any chances to really make me make a play and have to make a diving save at all," he said. "People talk about us having zero shots on goal or whatever, but they had [21] shots and the only three they had on target were right to my hands, so to me it doesn't really count. The same people who are talking smack right now are the same people who doubted us this whole season. So we're fully confident, and we have a good mentality going to Sporting KC and I think we'll come out on top."

Ochoa said the lack of respect he perceives RSL has gotten has been its biggest motivation.

"The league has doubted us this whole season," he said. "It's funny for me. I like humor. I think it's funny we're shutting a lot of mouths up. So that's definitely our motivation."

Ochoa, who grew up in Southern California, is a product of RSL's academy program in Arizona, which he entered after a short stay at the Guadalajara academy in Mexico. He was 17 when he signed a Homegrown contract with RSL in 2018.

Ochoa was one of four RSL Homegrown players to start against the Sounders along with defenders Aaron Herrera, Justen Glad and Andrew Brody. “We grew up playing through the same system with the RSL Academy," he said, "and I have also built a relationship off the field with all three of those guys. I think our chemistry is helping us get these results."

Sunday's meeting will be the third of the season between Real Lake Salt and Sporting KC. RSL won, 3-1, at home on May 1 and defeated Sporting KC, 1-0, on Decision Day when Damir Kreilach scored the game-winner in the fifth minute of stoppage time to send RSL to the playoffs after Sporting KC was wrongly denied a penalty kick minutes earlier.

'Seattle's a better team.' Ochoa said the victory over Seattle, the Western Conference's No. 2 seed, gives him confidence that RSL can beat Sporting KC, the No. 3 seed.

"Sporting KC is a top opponent," he added. "They have really good players, but at the same time I would say in my opinion Seattle's a better team. And for us to beat Seattle, one of the top dogs in the league for me, I think it gives us the confidence to go against any other team in the playoffs and get a result. Like I said, I think Seattle was a tougher opponent, so I think we're all confident going into Sporting KC and I think we're going to give a good battle."