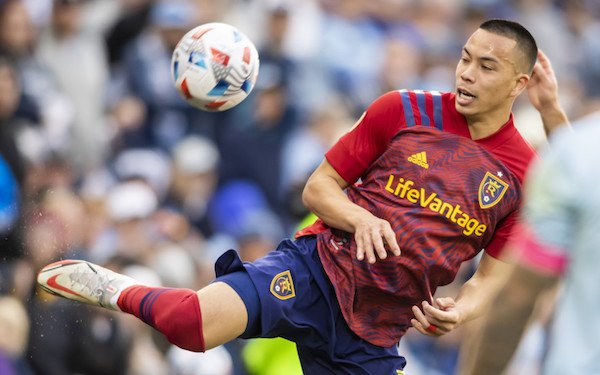 Real Salt Lake was seconds away from being eliminated from the MLS playoffs on Decision Day when it scored in the fifth minute of stoppage time to defeat Sporting Kansas City, 1-0, and advance as the No. 7 seed.

On Tuesday, RSL didn't get off a shot in 120 minutes but moved into the Western Conference semifinals when it beat the Seattle Sounders, 6-5, in a shootout.

And on Sunday, the improbable happened again as RSL returned to Kansas City and came back from a goal down in the first half to beat Sporting KC, 2-1. Again, the winner came in second-half stoppage time.

Second-half RSL substitutes Anderson Julio and Bobby Wood (photo) each scored, and Wood's winner 23 seconds into what was slated to be two minutes of stoppage time was set up by a long run by the third second-half sub, Justin Meram, from midfield into the penalty area.

The goal was RSL's eighth goal of the season after 90 minutes and moved it into the Western Conference final on Saturday at Portland's Providence Park against the Timbers.

The comeback victory was the latest twist in what has been 15 months of upheaval for RSL.

Since the beginning of the year, MLS has been trying to sell the club and other assets associated with it since owner Dell Loy Hansen walked away after allegations of ongoing racist behavior were made and the league launched an investigation into RSL.

Without an owner, RSL's spending has been limited, and almost no one gave it a chance to make the playoffs. Things looked bright until its head coach, Freddy Juarez, left on Aug. 27 with the team in sixth place. Days later, it was revealed that he left to take a job as an assistant coach at Seattle.

And Real Salt Lake was one of several MLS clubs impacted by the ongoing pandemic in the playoffs as its playmaker and captain, Slovakian international Albert Rusnak, has missed both playoff games due to health and safety protocols after missing just 15 minutes during the 34-game regular season.

When Juarez left, assistant Pablo Mastroeni was installed as interim coach. He says the team's underdog mentality was formed in preseason.

“When everyone picks you to finish bottom of the West and probably one of the bottom two teams in the league, you have a chip on your shoulder," he said on Sunday. "These guys are professional athletes that make a living proving people wrong. Have we harnessed that? I think so, but we have also put in the work. We also have a lot of belief and I think we play some good stuff."

And that was evident on Sunday when RSL came out in the second half and was the better team.

"The culmination of all of the things that happened during the season prepared us mentally and tactically for moments like tonight," Mastroeni added. "The guys went down a goal and away from home it’s easy to get loose and chase it. But we stayed the course, followed the game plan and the guys made plays in the second half. That’s a testament to the character of these players and guys that really strive to be a part of something greater than themselves with this team.”