Ashley Hatch, who scored in the first minute of the USA's 3-0 win over Australia last Saturday, struck in the 4th minute. But on Tuesday the Americans, despite an edge in well-orchestrated attacks amid the lively end-to-end action, failed to strike again and the Aussies earned a 1-1 tie with an 88th minute goal. 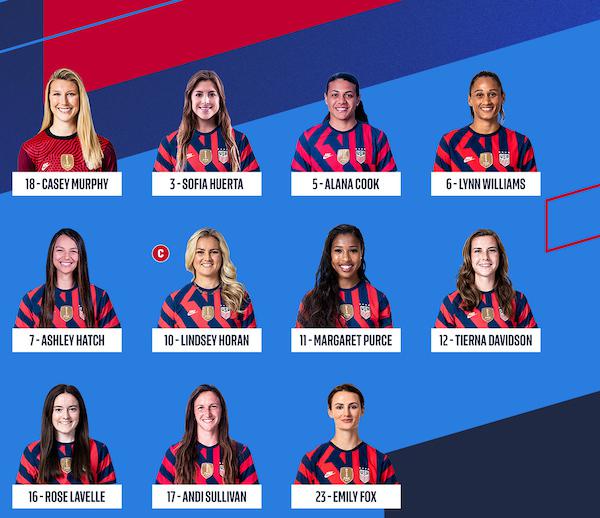 Casey Murphy's single save came on a 22-yard volley by Mary Fowler that flew through a crowd and bounced in the goal area before Murphy deflected it off the post for a corner kick. Australia's equalizer from Kyah Simon's 25-yard shot took a reflection that left Murphy no time to recover from her anticipating its original direction.

Right back Sofia Huerta, the only lineup change (for Emily Sonnett) from the 3-0 win, stifled Australian flank forays and impressed offensively by opting for precise passes rather than hopeful crosses. In the 34th minute, she spun away from her marker and delivered a cross-field pass from which Lynn Williams set up a close-range Lindsey Horan chance. In the 42nd minute, Huerta carried the ball from deep in the U.S. half into Australian territory and delivered a perfect through-ball to Midge Purce at the penalty area arc. Left back Emily Fox in the second minute served up a chance for Ashley Hatch and shortly after she robbed Hayley Raso on the other end to spark sustained possession for the USA ahead of its goal. Fox also intervened as Raso honed in on goal in the 57th minute with a swift tackle.Central defender Tierna Davidson lost the ball in the 11th minute but caught up with Raso for a clean tackle in the penalty area. She also supported Fox well in the battle with Raso, blocked a 22nd-minute shot, and passed cleanly out of the back. The other center back, Alana Cook, dominated in the air and helped shut down Sam Kerr.

Rose Lavelle poked the ball away from Tameka Yallop to set in motion the buildup for the USA's goal and her creative maneuvers set up a Lindsey Horan chance in the 15th minute. Horan shared playmaking responsibilities with Lavelle while supported by Andi Sullivan's defensive midfield work. The trio generally outplayed its midfield counterparts but failed on the finishing front. Lavelle's only shot went sky high, while Horan shot wide and mis-hit to the keeper from close-range. And in stoppage time, Horan would have had the gamewinner had she stayed onside for Davidson's pass.

Within the game's first minute, Lynn Williams, dribbled from the middle of her own half and burned past Courtney Nevin before keeper Lydia Wiilliams grabbed her pass toward Ashley Hatch. On the goal, Williams, after receiving the ball from Hatch, delivered a perfectly time pass to Midge Purce, who calmly set up Hatch's goal from eight yards. Hatch, who spearheaded the U.S. attack while also moving into midfield at the right moments, finished with four shots: one hit the net and two forced saves. Purce's composure helped create the goal but she squandered a one-on-one chance with a poor touch on Huerta's excellent pass. Williams forced a big save in the 58th minute.

After late sub Becky Sauerbrunn headed clear a long ball, Ashley Sanchez lost a battle with Clare Wheeler, who sparked the buildup that ended with Simon's shot hitting the net off Sauerbrunn's leg. Kristie Mewis was tripped by Ellie Carpenter in the 73rd minute but didn't get the call. Morgan Weaver took part in late U.S. surges forward. Imani Dorsey made her USA debut.