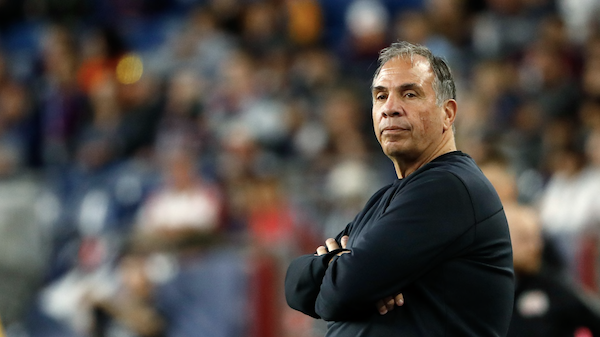 At the age of 70, New England Revolution head coach Bruce Arena is the still going strong.

The oldest coach in MLS history was honored as the league's Coach of the Year for the fourth time on Monday, a day before his Revs begin their quest for the MLS Cup title against NYCFC in the Eastern Conference semifinals at Gillette Stadium .

They are coming off a record-setting regular season during which they won their first Supporters’ Shield and broke an MLS record with 73 points.

If the Revolution sweeps its next three games, Arena will become the first coach to lead his team to three Supporters' Shield and MLS Cup titles in the same season -- the late Sigi Schmid has also done it twice -- and he will be become the first MLS coach to win a league championship with three different teams.

Not that anyone around the Revs is getting ahead of themselves.

"If you've watched these playoff games to date," Arena said on a media call on Monday, "I think they're highly unpredictable."

Arena, who has been coaching soccer for 44 years, received 58 percent of the votes for Coach of the Year from MLS technical staff, players and media to beat out the Colorado Rapids' Robin Fraser, the runner-up with 21 percent.

He took over the Revs as head coach and sporting director in the middle of the 2018 season. The Revs were 3-8-2 when Arena replaced Brad Friedel and Mike Burns and coming off a string of four games during which they conceded 18 goals -- 3-0, 6-1 and 5-0 losses and 4-4 tie -- to tie an MLS record for most goals allowed in four games.

New England has made the playoff in each of Arena's four seasons in charge. He has now made the playoffs in 17 of his 18 MLS seasons, only missing out in 2008 when he took over the Galaxy in the middle of the season. The next season it reached MLS Cup, one of seven trips Arena has made to the MLS championship game. In a league where building and keeping teams together is difficult, that consistency is remarkable.

Arena said he has changed as the game as changed.

“Am I different than I was in my early years? For sure. No question about it,” he said on Monday. “We learned something what we do every day in this profession. I think the game has changed. The atmosphere around teams has changed."

The other thing Arena has gained is patience.

“Maybe 30 years ago, I knew everything," he said. "Today I realize I don’t. That’s a big change, for sure. I have changed. I think I’m a little bit more patient than I was in the past. I’ve enjoyed coaching every bit of the way."
mls
6 comments about "At 70, Bruce Arena sets another coaching milestone".
Read more comments >
Next story loading