How I yearn for 'especially sporting conduct' 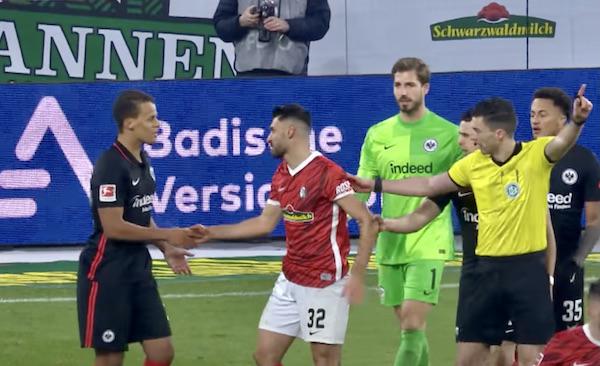 Former U.S. national team player Timothy Chandler was recently involved in a much-discussed penalty area incident  during his club Eintracht Frankfurt's Bundesliga game at SC Freiburg. Freiburg's forward Vincenzo Grifo knocked the ball past Chandler, then went to ground. The home crowd howled for a penalty, the referee took a long look, then Grifo got to his feet and admitted that there had been no contact. He was immediately congratulated by the home players and later praised to the hilt by Eintracht coach Oliver Glasner. Referee Florian Badstübner refrained from showing Grifo what should have been, strictly speaking, a yellow card.

Which is all fine and good. Only, should sporting behavior not be the absolute standard, and absent from all post-game analyses? Shouldn't the norm in fact be no cheating and gamesmanship at all (stop laughing over there at the back)?

When it comes to diving, that's increasingly the case. Thanks to the VAR, a penalty call against Chandler would certainly have been overturned. Grifo -- a very likeable person and player, it should be said - must have known that he would be vilified for trying it on with this old trick, and that TV replays would quickly find him out. Perhaps he remembered how striker Timo Werner was booed for years around Germany after fiddling a penalty with a dive for his former club Leipzig in the pre-VAR era. Werner left for Chelsea in England and is not widely missed.

As someone who grew up playing in England in the 70s and 80s when this kind of thing just wasn't done, I'm obsessed with the concept of sportsmanship. Even more so now that I'm a referee. There's a section in the German federation's post-game reports where referees can tick a box for 'especially sporting conduct,' and then file a glowing report. Not once in seven years of officiating here have I seen the remotest cause to highlight someone doing the decent thing. It just doesn't happen. Despite the slogans on the armbands and hoardings, you're a fool to think that Fair Play matters.

Earlier this month, though, I refereed a boys U-19 game when the perfect opportunity arose to file that special report. The game took place on a rutted, muddy field, and the nets were in a terrible state, repaired in dozens of places. I'd checked them before the game, but I missed a hole right next to the goal's left post. And, you've guessed it, the away team -- which was leading 2-0 at the time -- scored a goal through this very hole, and the ball continued on a relentless path toward the boundary fence. There was a problem, though. At the exact second the ball went in, a defender had blocked my view of the goalpost.

Naturally, the attacking team claimed the ball had entered the goal. I examined the net, which was when I found the hole. I was 99.9% convinced myself that the ball must have gone in the goal and straight back out again. But I hadn't seen it, and I can't give what I don't see. So I asked the defending team, "Did the ball go in?" Not a single player would look me in the eye and answer the question. You might argue at this point that I should just have given the goal, and that's a very strong argument. I don't think anyone would have complained. Yet I wanted to give the home team the opportunity to take a moral step up in what had been the customary miserable game full of fouls, moaning and opponents squaring up to each other. Go on, be the better men, just for once. Nothing.

So I went to the team's two coaches. Had they seen if the ball went in or not? Of course, they claimed they hadn't seen it either. I apologized to the away team -- who were thoroughly dominating the game, and who took the decision pretty well -- and said that I couldn't award the goal if the home team would not give me an honest answer. I repaired the net, and the game continued with a goal kick. At halftime, two parents from the home team confirmed that the ball had indeed gone in (thanks for letting me know, 10 minutes too late ...). Fortunately, it had no bearing on the result, and the away team ran out 4-1 winners.

The home team last week withdrew from the league, which didn't surprise me. The coaches were barely interested, and the overall team spirit was non-existent. Late in the game, I'd red-carded one of the players for an act of unprovoked violence when he deliberately kicked an opponent hard in the shin, long after the opponent had played the ball. It summed up the team's approach on a grey November day when you felt like no one in the side really wanted to be there. And yet, if just one player on this team had said, "Yep, the ball was in, ref," then I'd have given the goal and finally written one of those reports for 'especially sporting conduct.' The team would have received recognition from the state soccer association, and the story would have done the rounds in the city and likely in the press too -- this happened with a similar incident a few years ago when a goalkeeper admitted that a shot he'd 'saved' had indeed crossed the line. Perhaps it would have kicked off a new approach to their attitude, and prompted talk about how undisciplined teams rarely win games. About the reasons we play sport, and what we get out of it.

There was no camera to record the moment, though, so no one present had a Grifo-like attack of conscience. There was no definitive proof that the ball had entered the goal, just a collective claim set against the sullen, passive mendacity of the defending team. It soured the afternoon further still, and most likely catalyzed the home team's decline. In truth, that's no great loss to the soccer landscape, but it's nonetheless an unsurprising indictment of the state of sportsmanship on the city's increasingly joyless amateur fields. Shame on them all.

referees
17 comments about "How I yearn for 'especially sporting conduct'".
Read more comments >
Next story loading