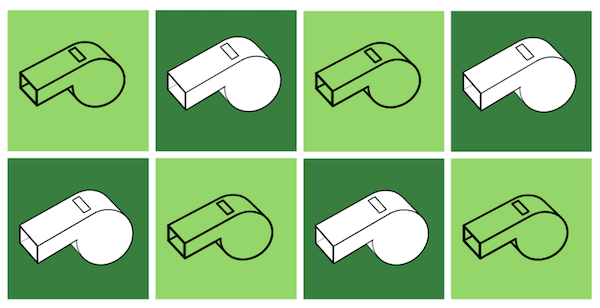 News flash: We have a ref shortage.

Recruitment, in most areas, isn’t the issue. Retention is. In conversations with several ref assignors and league staff from several regions, I’ve found that a lot of refs simply re-evaluated their priorities after the COVID shutdown and decided that it wasn’t worth it to come back. In my area, we’ve had desperate last-minute pleas to get refs not just for U-11 rec games but for MLS Next, ECNL and UPSL games.

Adding a few more bucks won’t hurt, but as in many jobs that people are refusing to take up again, the working conditions are the stumbling block. In warehouses, it might be the back-breaking, break-less shifts that aren’t ameliorated with a pizza party. On soccer fields, it’s abuse.

And when it comes to stopping referee abuse, the nice approach isn’t working.

It’s time to be the bad cop.

The Laws of the Game clearly give referees the authority to put a stop to misbehavior on and off the field. Warn. Caution. Dismiss. If it’s what refs call OFFINABUS (offensive, insulting or abusive language), go straight to dismiss. Do not pass Go and collect $200. Go directly to the parking lot.

Sure, this approach introduces some complications. Younger refs may overreact and show red every time a coach so much as grimaces. And it’s often the parents, not the coaches, who need to watch the game from a remote location.

But we can address those.

First, as difficult as this may be for assignors in a time of severe ref shortages, bring along new refs slowly. One of my first assignments was an AR shift at a U-13 WAGS Tournament game between two nationally ranked teams, and I had to chuckle when the parents behind me complained about the center ref (recently removed from being an All-ACC player herself) by saying, “And it’s such an important game!” “Can’t be all that important if I’m here,” I thought.

I kept up with play and avoided confrontations with the parents right behind me, but I should’ve been an AR at a lower-level U-11 game. (Sadly, given the current shortages, a lot of U-11 and U-12 games are going with just one ref, which means parents will have a far better view of a lot of possession and offside calls than the ref will, and they’ll moan about every possession call as if it’ll decide their children’s chances at getting a scholarship at Virginia or admission to MIT.) I should’ve had more experience in laid-back rec leagues.

Hopefully, the higher the stakes, the more experienced the ref. As refs gain experience, they get better at game management. They know when to let the immediate reaction slide, either ignoring it or saying a couple of calming words. I still have a lot to learn in this aspect of reffing (time to read Randy Vogt’s book!), but I’m better than I was when I first started and was put into games I shouldn’t have been doing. At the very least, I won’t be caught unaware the next time I ref a game in which a U-10 coach doesn’t care if her players are fouling others to the point of injury, all egged on by foul-mouthed parents.

If a younger ref is too quick to go to the cards to quell adults, is that such a bad thing? The younger ref will be working in younger age groups, where it’s that much more important to make the adults shut up and watch. The occasional overreaction will be worth it when the coaches and parents realize they’d better not risk an early departure from the sideline.

If the miscreants continue, the ref can send off the coach, but that just gives the parents one more thing to complain about, and the ref literally has no more cards to play other than stopping the game. And if the ref stops the game, he or she has to explain why. Then the ref has to address the parents anyway, and there’s no coach on the field to act as a buffer.

So we need a more creative solution.

One possibility: Show yellow to the coach from across the field and point to the offending fan(s). The coach then has the option to come across and chat, but if we’re proactive and tell clubs what we’re doing at the beginning of a season or tournament, they can tell their parents what that yellow card means.

Another: Train refs to tell parents, “Look, if this continues, I have to bring over your coach, and if it continues beyond that, your coach will be sent off.” That’s the only thing that needs to be said.

But we also may need to accept that there are situations in which a ref can’t wait.

Finally, teach game management. Ref certification shouldn’t be limited to questions about what happens if a goalkeeper leaves the field to smoke while a substitute throws a shoe at a dog that ran onto the field and a coach uses abusive language at a player. (That said, I highly recommend Jan ter Harmsel’s online quizzes on bizarre situations, fun for fans and educational for refs.) Young refs in particular need to learn how to convey authority without being overbearing ogres.

Then, at last, refs will find they’re not dealing with abuse with both hands tied behind their backs. They’ll have a toolkit for defusing (side note: it’s not diffusing, folks) situations.

Then more refs will stick around. Fewer games will be canceled or proceed with no refs. Some refs may even graduate to higher levels, increasing the talent pool for PRO. And your games, from U-9 to the World Cup, will be better.