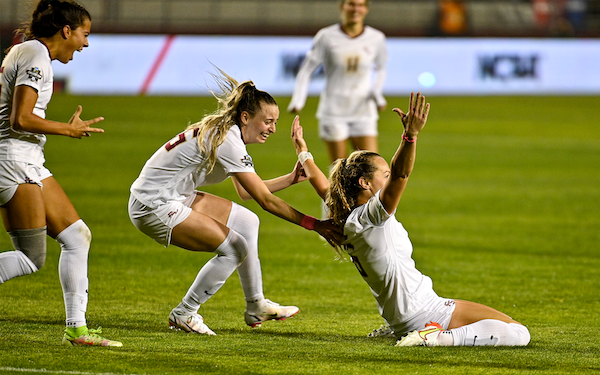 BYU advanced to the final in its first trip to the Women's College Cup thanks to a shootout win over WCC rival Santa Clara, this year's College Cup host and the tournament's defending champion.

The Cougars missed their first two attempts but were perfect after that on shots by Brecken Mozingo, Bella Folino and Olivia Wade for a 3-2 win that moved them into the final against Florida State, a 1-0 winner over Rutgers.

Because the NCAA respects BYU's policy of not playing on Sundays, the final has been moved to Monday at 5 p.m. PT.

Both BYU and Santa Clara had chances in overtime, but their match ended 0-0. BYU's Kendell Petersen had a shot tipped off the crossbar by Bronco keeper Kylie Foutch in the 97th minute; BYU defender Laveni Vaka headed Izzy D'Aquila's shot off the line in the 102nd minute.

Florida State will play in its third national championship game in the last four years and sixth overall.

The lone goal in Friday's two games came in the 71st minute when Jenna Nighswonger's corner kick fell to Jaelin Howell after deflecting off a Rutgers defender, and the U.S. international placed the ball in the back of the net for her third goal of the season.

But the FSU star was Cristina Roque, the hero in its march to the College Cup final in the spring when it fell to Santa Clara in the final.

Rutgers had the Seminoles on their heels throughout the second half, but Roque, a sophomore who represents Puerto Rico internationally, made three excellent saves, first on four-time All-American Amirah Ali and then a double stop on Allison Lowrey and Frankie Tagliaferri in the 78th minute.