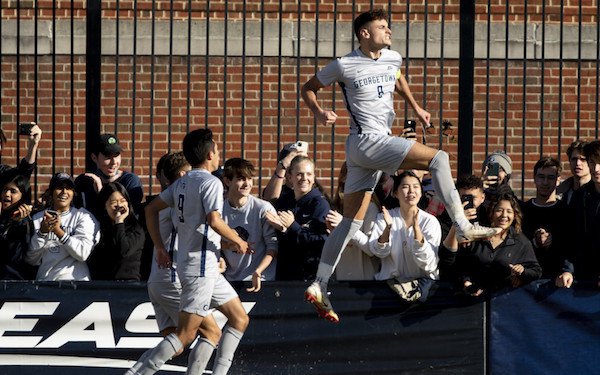 Three coaches who played for Scotsman Bobby Clark and later served as his assistant coaches have led their teams to the 2021 Men's College Cup: Chad Riley (Notre Dame), Brian Wiese (Georgetown) and Clark’s son Jamie (Washington). Clemson will complete the semifinal field in Cary, North Carolina, where the College Cup will be played Dec. 10-12.

No. 1 seed Oregon State fell to No. 8 Clemson, 4-3, in a shootout after their match in the quarterfinals of the NCAA Division I Men's Tournament ended in a 1-1 tie.

Clemson keeper  George Marks made saves on Javier Armas and Tsiki Ntsabeleng to send the Tigers to the Men's College Cup against ACC rival Notre Dame. They will be making their ninth appearance in the semifinals and first since 2015. Oregon State was making its first appearance in the quarterfinals.

After losing in the quarterfinals in the last two NCAA Tournaments, No. 2 seed Washington defeated 10-time national champion Saint Louis, 2-0, thanks to two goals by Gio Miglietti to advance to the College Cup for the first time. The match drew a record crowd of 3,619. The Billikens, the No. 10 seeds, entered the quarterfinals as the only unbeaten team in the country and were seeking their first appearance in the College Cup since 1997.

No. 3 seed Georgetown needed a shootout to defeat No. 11 West Virginia, 4-1, and advance to the College Cup for the second time in three seasons and third time in program history. Junior Dante Polvara (photo) scored on a penalty kick for the Hoyas in the 67th minute to even the score. The match drew a record crowd of 3,027 at Shaw Field.

In a battle of ACC teams, No. 4 seed Notre Dame edged No. 5 Pittsburgh, 4-2, in a shootout. Pitt was successful on its first two attempts before Bryan Dowd made back-to-back saves to send the Irish to the College Cup for the second and first under Riley. Under Bobby Clark, they defeated Maryland, 2-1, in the 2013 final.