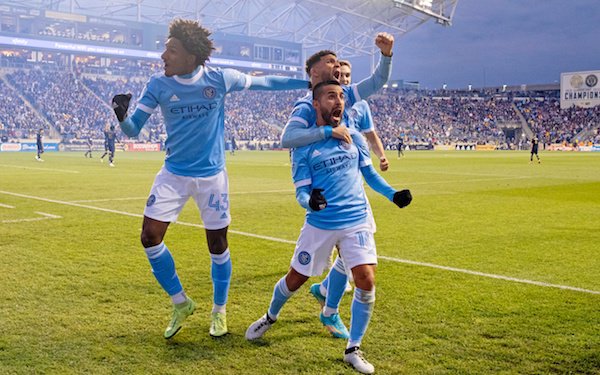 The MLS postseason has been a battle of attrition.

Six of the first 11 playoff games, including all four conference semifinal games, weren't decided until the 90th minute or later, so it shouldn't have been expected that Sunday's Philadelphia-NYCFC game would be any different.

After all, the Union was missing 11 players, including five starters, due to MLS's health and safety protocols, the most Covid-19-related restrictions to hit an MLS team in 2021.

NYCFC? MLS Golden Boot winner Taty Castellanos (19 goals) was suspended after being red carded late in overtime of the win over New England on Tuesday, but Coach Ronny Deila's options to replace the Argentine included Heber, who scored 15 goals in his first MLS season in 2019, and 19-year-old Talles Magno, another Brazilian whom NYCFC acquired from Vasco da Gama for $8 million in May.

Most MLS clubs don't have the luxury of stashing $8 million signings on the bench with the goal of grooming them for the future.

Talles Magno, who played just 444 minutes in the regular season, was NYCFC's ace in the hole, coming on for Heber in the second half and scoring the winning goal in the 88th minute to send the Cityzens to MLS Cup for the first time with a 2-1 win over the valiant Union.

The goal came after Gudi Thorarinsson, another second-half replacement, beat Union defender Olivier Mbaizo to the ball on the endline and fed Magno in the middle.

Buoyed by a sellout crowd of 19,487 -- the largest in Subaru Park history -- the patch-work Union stymied NYCFC in the first half and even took the lead in the second half on an own goal credited to NYCFC center back Alexander Callens. But less than 90 seconds later. Maxi Moralez equalized, scoring on a pass from Ismael Tajouri-Shradi following a shot by center back Maxime Chanot that goalkeeper Matt Freese parried away.

Five minutes before the game's first goal, Delia made a triple substitution. The momentum in the game soon switched, and th three subs -- Talles Magno, Thorarinsson and Tajouri-Shradi -- were involved in the two goals in the comeback win.

Thorarinsson, an Icelandic international signed on a free transfer in 2020, had set up the go-ahead goal in overtime on Tuesday against the Revs. Tajouri-Shradi, a Libyan international who grew up in Switzerland and Austria and has scored 26 goals in four MLS seasons, provided needed energy to the NYCFC attack on Sunday.

“The subs looked like they were a million dollars," said Delia, all three of them, and that’s good."