Learning about soccer -- from jazz, and from the words of a great poet (Part 1) 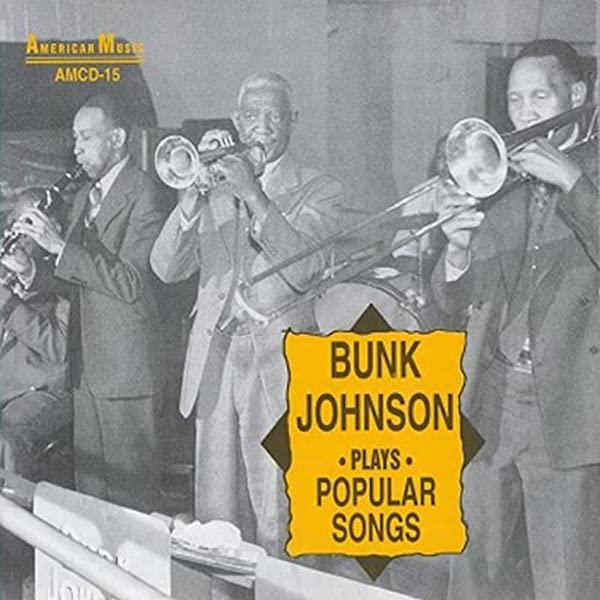 This starts way back, way, way back, during the 1940s when I was a teenager in England. The war had just ended, and I had found two boyish interests -- soccer and jazz -- that made me happy. Not least because both of them involved parental disapproval. That was my -- unaware -- contribution to the burgeoning post-war teenage revolution.

Mum and dad, of course, understood nothing in those days. So it seemed to me. They sniffed and sneered a bit, but, bless them, never interfered. For the next 75 years or so soccer has remained a constant in my life. I’ll deal with that shortly.

But my devotion to jazz flowered early, then rather quickly withered. At age 14 I was greatly enthralled by the revivalist movement in jazz, which saw jazz as the black man’s music, the music that had been played in New Orleans around the beginning of the 20th century.

There were revivalist bands all over the place, in the USA and in England. Most of the musicians were white, trying to recreate the sound of that early black jazz. I know something about that because I was the cornet player for just such a band in Wolverhampton in 1948. We called ourselves the Black Country Shit-Heavers. Gawd, we were awful. And, fortunately, short-lived. The real excitement came as some of the original jazzmen -- many of them now in their 70s -- were enticed to take up their instruments again.

Among them was Bunk Johnson, whose name kept cropping up as one of the great trumpet players of the period. In 1942 he was found, still in New Orleans, eking out a living with day jobs. He hadn’t played the trumpet for years. Money was raised to give Bunk a set of dentures and a new trumpet. He, with other old-timers, started recording in 1942.

Bunk told everyone he’d been born in 1869 making him age 73. Which meant that his claim to have played with the legendary Buddy Bolden could be true. But his true birthdate was probably 1879. That was just one of many extravagant lies with which Johnson decorated his former career. He also claimed to have introduced jazz into England, and to have taught Louis Armstrong how to play the trumpet.

None of this colorful embellishment bothered me. Because I had heard some of those 1942 recordings. Nothing since has come close to matching the emotional thrill I got from my first hearing of Bunk Johnson.

By now I was collecting jazz records -- 10-inch 78rpm discs, eminently breakable. I went off to college, taking some 50 records with me (five or six featured Bunk), plus a klunky portable gramophone (phonograph if you like) that I had to constantly wind up. It also featured a brutishly heavy pick-up arm complete with metal needles that slowly ate into the record grooves, making the discs more and more difficult to listen to. 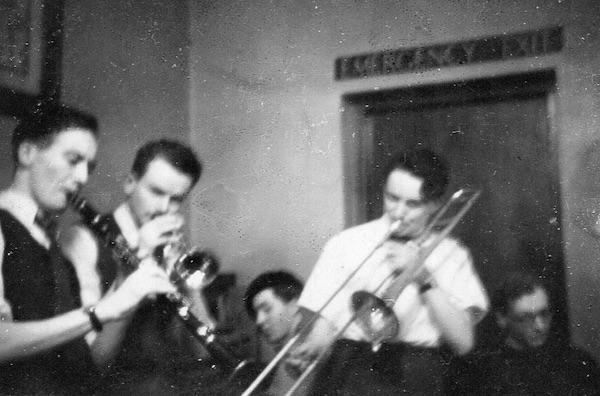 I became the secretary of the Nottingham University Rhythm Society, started giving talks and lectures about jazz. Which the Society President called erudite -- I had to look that up to discover whether I was being praised or trashed. Hell, I was only 20.

By 1953 I had moved to London to become a journalist. Jazz was now almost a fading memory. Not, I felt, because I had lost interest. Rather because jazz had betrayed me. It had changed, had turned into the despicable be-bop. Dizzy Gillespie was now the trumpeter to be worshiped, and I couldn’t bear to listen to him. The jazz that I had known and loved was being replaced by something I didn’t understand. Be-bop came through to me as an ugly tuneless, rhythm-less -- and soul-less -- racket.

I immigrated to the States in 1959. I knew I was probably saying goodbye to soccer, but I imagined I could rediscover jazz -- that must be possible in New York. I visited some jazz clubs, and found they had now moved on to “modern jazz.” Which I found even more repulsive than be-bop. I mean, have you ever tried to listen to, to enjoy, a solo from saxophonist John Coltrane? Or the endless and meaningless trumpet meanderings of Miles Davis?

Forget it. Whatever these guys were doing, it wasn’t jazz. All the early heroes of jazz, the ones I admired, were now being laughed at. Goodbye jazz. For me, it was dead, stone cold dead.

But ... no jazz? And no soccer? I couldn’t accept so bleak a life. I went nosing around New York, looking for signs of soccer life. I was agreeably surprised. There was plenty of soccer being played. Mostly along ethnic lines, and mostly not particularly good. No matter, this was a world I understood. I spent my weekends criss-crossing New York on the city’s wonderful subway, in search of the obscure little “stadiums” where ethnic soccer flourished.

In 1964 I went off to live in Italy for 18 months where I saw plenty of calcio. I came back to the USA in 1966, just as soccer began to flex its muscles. I was jobless, on the verge of penniless. I was 37, and my options were running out -- when suddenly there was soccer, an old pal, begging me (so I convinced myself) to join in. That’s what I did, and slowly I settled into the life of a soccer journalist.

That other early love, jazz, faded into a distant, nostalgic memory. My pile of 78rpm records had long since disappeared, so little cared for by then, that I can’t recall what happened to them. Farewell Bunk Johnson -- I felt a sweet sadness about that, but I had other things on my mind now.

Then, in 1970, jazz suddenly returned. Bigtime. I learned, by some mysterious route, that the poet Philip Larkin, a huge favorite of mine, had written a book about jazz. The great Larkin, he of  “sexual intercourse began in nineteen sixty three ...” and “They fuck you up, your mum and dad . . .” ,

I bought the book, and I read it. Larkin was speaking to me -- “Few things have given me more pleasure in life than listening to jazz,” he said. As I read on and all those nearly forgotten names came bounding back, I returned, easily and pleasantly, to the warm glow of my own boyhood love for jazz -- “that unique private excitement that youth seems to demand” said Larkin.

In the 1940s, a couple of years ahead of me, Larkin had been seized by jazz, and then had felt the same sense of betrayal as it faded away into be-bop and worse. He had liked the good old guys (like Bunk), had come to loathe the modern guys. What fun to read his exquisite trashing of Coltrane -- “with the vinegary drizzle of his tone ... Coltrane contributes a solo of characteristic dreariness.” Coltrane also sounds to Larkin as though “he is playing for an audience of cobras.”

It was all rather odd. Larkin’s book surely revived my interest in jazz. It did not make me want to listen to it again. But I repeatedly read -- three or four times -- Larkin’s wonderful Introduction to the book, in which he put down his understanding of what had happened to jazz, and why.

And it was in that Introduction (which, of course, does not even mention soccer) that I learned -- from Larkin’s thoughts and ideas, so beautifully presented in his wonderful prose -- a great deal about the development of soccer in the modern era.

Part 2: Learning about soccer -- from jazz, and from the words of a great poet

england
8 comments about "Learning about soccer -- from jazz, and from the words of a great poet (Part 1)".
Read more comments >
Next story loading