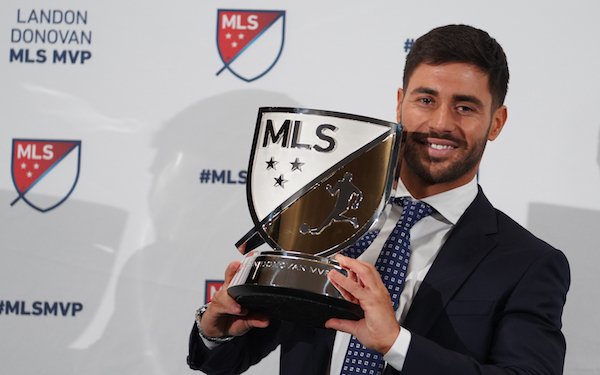 Carles Gil came to the New England Revolution when Brad Friedel was the head coach and Mike Burns was the general manager, but his new career in MLS took off after Bruce Arena was hired to replace the roles Friedel and Burns filled in May 2019.

The Spaniard soon emerged as one of the top playmakers in MLS, leading the Revs to the playoffs three years in a row.

It culminated in 2021 when New England won its first Supporters' Shield with a record 73 points and Gil was named the winner of the 2021 Landon Donovan MLS Most Valuable Player.

Gil led MLS with 18 assists in 2021. He was on pace to break the league record when a muscle tissue injury sidelined him for all of August.

In 2019, the 29-year-old Spaniard was named the MLS Newcomer of the Year with 10 goals and 14 assists. He was also named the 2021 Comeback Player of the Year after missing all but six games in 2020 with an injury to his left Achilles tendon that required surgery.

“For me, it means a lot," Gil said, "especially after the 2020 season, where I had a tough injury and we all went through that pandemic. I was very inspired coming into this season to see my teammates and the collection of players that we have here. We realized after the 2020 season that we’re a championship-caliber team, we’re a great team. And we showed that this regular season where there were more games."

Arena said Gil's leadership was critical to the Revs' turnaround.

"When you think about the Revolution," he said, "when he arrived in 2019 we were at the bottom of the league. And in a short period of time and until recently, we were the best regular season team in the history of MLS. And Carles is certainly responsible for the tremendous progress we’ve made with our club.”

Gil praised the support from his teammates since he arrived in 2019 from Deportivo La Coruna and sought to revive his career that began at Valencia and included two years at Elche and 18 months at Aston Villa.

“Well, for me, they’re the most important aspect here," he said. "My first day, Andrew [Farrell] helped me with my translations. At that moment, my English wasn’t very good. I adapted quickly and felt right at home. I’ve lived some great moments with my teammates and it’s amazing being around them. I get emotional seeing the guys who play less minutes, celebrate our goals and wins, and that’s so important for me. They made all the difference. This season, we’ve had so many games, injuries, and national team call ups this year and we never took a step back. And that says a lot about the collection of guys that we have here.”
mls
1 comment about "MVP: MLS award is especially rewarding for Revs' Carles Gil after 2020".
Next story loading