'Football, She Wrote': A wonderful collection of women's soccer writing on struggle, progress and hope 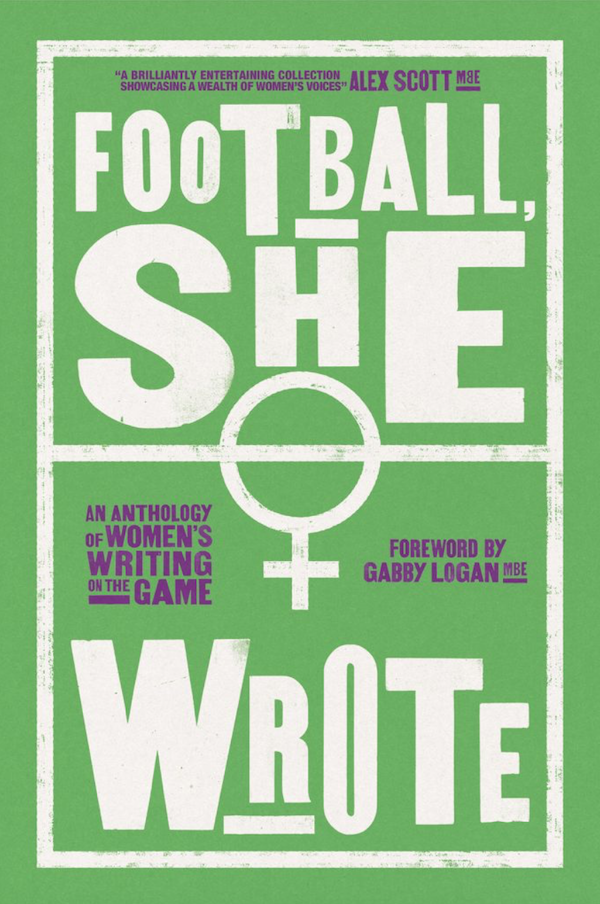 Football, She Wrote: An Anthology of Women's Writing on the Game, Foreword by Gabby Logan  (Floodlit Dreams)

Lisa was in the grade below me at school, but I saw her every day during recess when we played pickup soccer on the tennis courts. I remember how she constantly brushed her long brown hair away from a face that was red with the exertion of keeping up with the boys. She was no better or worse than the rest of us, and not once did we question why she was there. Yet neither did I question why, in all the years I was at school in England during the 1970s and early 1980s, she was the only girl I ever saw play soccer.

This was only a handful of years after the English FA lifted its unconscionable ban on women playing the supposedly 'global' game. That ban must still have been in place the morning that my grandfather walked me to our local ground in my hometown of Market Rasen to watch my first ever soccer match. Remarkably, the game was between two women's teams. I've no idea who they were or where they came from, but it's telling that they played in a tiny, anonymous Lincolnshire town on a weekday morning when no one was around to watch, or inform the FA of this illegal activity. It was the last time I watched women play until I took my daughters three decades later to watch the opening game of the Women's United Soccer Association at RFK Stadium in Washington, D.C.

Just as it's heartening to see how far women's soccer has come since the 1970s, it's heart-breaking to think of all the lost decades when the game was banned and -- for no reason besides the thick-headed prejudice of men -- women struggled for the right to kick a ball on a stretch of open field. This wonderful collection of 20 essays captures much of that struggle against the prevalent ignorance and bigotry, while stressing that there's still much work to be done in terms of acceptance and equal opportunity.

"Evidently we need to keep pushing boundaries -- and that is exactly why this book is important," writes broadcaster Gabby Logan in the foreword. In a piece by Kate Battersby, FIFA's Chief Education and Social Responsibility Officer Joyce Cook tells her remarkable tale of overcoming disability, and concedes that, "FIFA, like all sports and society in general, were late to the table with this. We're now writing the script. Will we ever finish the job? I doubt it." (You might flinch, though, at Cook's banal reiteration of the official FIFA line that staging tournaments in countries like Qatar -- where homosexuality is banned and women are second-class citizens -- is the best way to change people's minds. That remains widely open to debate given Amnesty International's report last month that thousands of migrant workers there remain trapped and exploited by the kafala system -- a disgraceful manifestation of latter-day slavery.)

Cassie Whittell tells the story of how, age 10, she formed a five-a-side team for a school tournament, but her sports teacher wouldn't let them take part on the logistically twisted grounds that ... girls don't play soccer. Yet still she forges her way into a soccer job after a life of setbacks and discouragement. Suzanne Wrack writes how Chelsea coach Emma Hayes garnered all the positive experiences and values of growing up on a rough housing estate and "took the atmosphere of unity, diversity and togetherness into every team she has built." Molly Hudson writes movingly about how soccer "is nothing, and yet it is everything" as she reflects on losing her mother, and how her "first true women's football idol," Fran Kirby, overcame her own grief and loss as a teenager to come back to life, with the game as her driving force.

"The importance of having a safe space to play and talk about football cannot be understated," writes Katie Mishner in her piece on the spectating experience for LGBTQ+ fans. Isabelle Latifa Barker reflects on the challenges of being a female soccer reporter, and asks us to "imagine any industry where people feel the commitment to the job would be so great that they wouldn't be able to have children if they wanted them." In similar vein, Louise Taylor tells of being snubbed and ignored by established male reporters in her early years on the Newcastle United beat. Both writers, though, also laud established coaches like Bobby Robson and Sam Allardyce who bucked the trend by offering them help, encouragement and, in one incident involving Robson, a sincere and public apology for a crass, chauvinistic insult.

Christina Philippou starts a team for moms, most of whom have never kicked a ball in their lives, lamenting that, "I was never taught how to throw, how to catch or how to kick at school, or elsewhere." Her team plays for fun without the pressure to perform or having to show up every single week. "If only sports had been like this at school," she reflects, "I might have got involved in team sports years ago." Tracy Light's concluding piece, 'Inclusive Football,' relates how soccer provides her teenage son Thomas, who has Down's Syndrome, "with the building blocks for a happy and fulfilling life. It's the key to his mental and physical well-being. It allows him to be fully involved and immersed in a community who accept him without bias or exclusion."

There are almost exclusively outstanding essays in this anthology, but I especially loved Katie Whyatt's piece on being a fan and reporter at fourth-tier Bradford City. "So often, I played football as the only girl," she writes, "and operated not with a chip on my shoulder, but a constant, underlying awareness that I was, as a result, a representative of all my kind. A mistake would not be mine alone, but would mean that girls could not, and should not, play football."

That made me think of Lisa again, going in hard for every tackle on the concrete surface. Did I think back then that every mistake she made meant that girls couldn't play soccer? Not at all. But maybe that's how she felt. And all the girls besides her who dared not even try.

1. Football, She Wrote: An Anthology of Women's Writing on the Game, Foreword by Gabby Logan (Floodlit Dreams)
2. Sidelined: Sports, Culture and Being a Woman in America by Julie DiCaro (Dutton)
3. The Barcelona Complex by Simon Kuper (Penguin Press)
4. The Hard Yards by Nige Tassell (Simon & Schuster)
5. Referees, Match Officials and Abuse: Research and Implications for Policy by Tom Webb et al (Routledge)