The 20-year-old Cole Bassett, one of four players to make his USA debut in its final game of 2021, scored in the 89th minute to earn the USA 1-0 win over Bosnia & Herzegovina. The late goal came after the USA played ineffectively against a foe that went a man down with a 40th-minute red card. 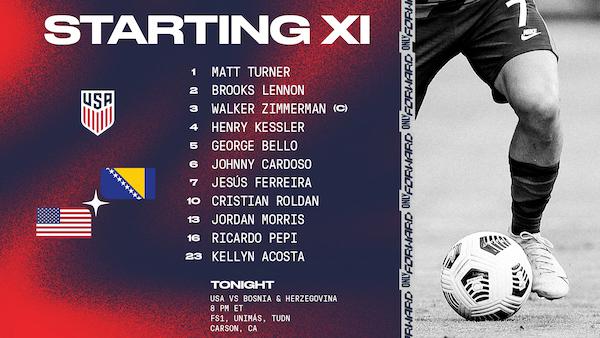 Matt Turner was called to make three first-half saves, each of which came straight to him with little power. He faced more pressure interchanging passes with his backline, and coped well.

Central defender Walker Zimmerman broke up attacks in the air and on the grass, and contributed the most to stifling the attacking duo of Igor Savic and Jovo Lukic. His central partner Henry Kessler also intervened at some key moments, such as his tackle on Ajdin Nukic in the 28th minute after left back George Bello slipped. Bello had earlier pulled off a clean slide tackle on Nukic. Right back Brooks Lennon was bolder going forward and set up Ricardo Pepi for a prime chance. Lennon had no excuse for his sloppy foul in the 30th minute that gave tame B&H a rare threat, but he started the second half with a well-weighted pass from which Jordan Morris won a corner kick. Subbed in the 63rd minute, Lennon could be pleased with his debut for the USA.

Cristian Roldan passed impressively in the first half, fleetingly resembling a midfield playmaker, but ultimately, like his teammates, fell short of the creativity needed to break down the B&H bunker. He coughed up the ball on a 75th-minute counterattack, and shot horribly in first-half stoppage time after a nice layoff by Morris to continue his scoreless streak for the USA. Central midfielder Johnny Cardoso -- who did intercept a pass in the penalty area on B&H's first promising attack -- took little advantage of facing a weak midfield, denying the USA of threats through the middle. Kellyn Acosta's inconsistent first half included a couple turnovers, a decent pass to Jesus Ferreira, with whom he rarely connected, and the foul suffered that got Amar Begic ejected. Acosta started the second half with a bad pass that ended a promising attack. A few minutes later, he under-hit one of his ineffective corner kicks.

Right winger Jordan Morris, aiming to prove his form after a long injury layoff, blazed past Hrvoje Barisic the first time he got the ball and created the most problems early on for the B&H backline. In the 31st minute, Morris' diving header off a fine cross from Jesus Ferreira was sharp but within reach of Nikola Cetkovic's foot. Morris faded in the second half. In the 15th minute, Ricardo Pepi, squandered a close-range chance when he whiffed on a perfect low pass by Brooks Lennon from the flank with his right foot when a left-footed attempt seemed more appropriate.

The injection off the bench didn't give the USA much of a boost. In fact, B&H mustered more counterattacks in the second half than in the first. But finally, in the 89th minute, a veteran and a trio of youngsters created the happy ending. Bryan Reynolds sent in a cross that Cole Bassett got a head on while falling. The ball came to Gyasi Zardes, who tapped it to Jonathan Gomez for a left-footed shot that the keeper Belmin Dizdarevic couldn't hold. Bassett pounced on the rebound from his fellow debutant's shot to win the game.

TRIVIA: The USA and Bosnia & Herzegovina had met twice previously: A 4-3 USA win in Sarajevo in 2013 that featured a Jozy Altidore hat trick and a Bobby Wood goal; and a scoreless tie in Carson in 2018.

OPPONENT BACKGROUND: Bosnia & Herzegovina, a national team since the Yugoslavia breakup in the early 1990s, qualified for the 2014 World Cup, exiting in the first round Its latest attempt to return to the World Cup failed when it won only one of its eight qualifiers in UEFA Group D. France won the group and Ukraine finished runner-up for a playoff spot. Its roster against the USA averaged less than 24 years or age and didn't include any players who have been capped more than twice.