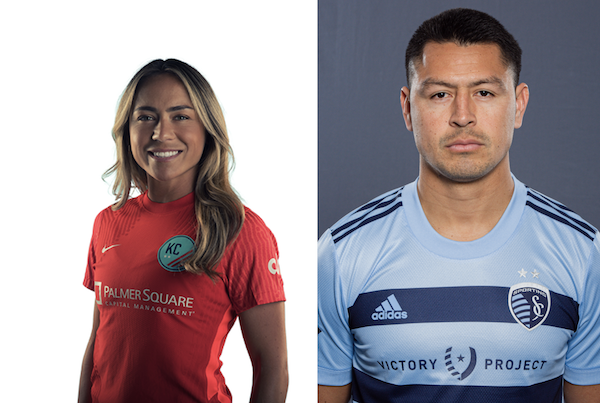 LaBonta, a Southern Californian who starred at Stanford, joined the Kansas City Current ahead of its 2021 NWSL inaugural season from the Utah Royals. She started her pro career with Sky Blue FC before two seasons with FC Kansas City and a loan stint with Western Sydney Wanderers in 2018-19.

Espinoza, who emigrated from Honduras to Colorado at age 12, played college ball at Yavapai and Ohio State before signing with Sporting Kansas City in 2008. After a 2013-14 stint with England's Wigan Athletic, with which he won the 2013 FA Cup, he returned to Kansas City, where the 35-year-old recently completed his 12th season with Sporting. Espinoza, who played for Honduras at the 2012 Olympics and 2010 and 2014 World Cups, helped Kansas City win three Lamar Hunt U.S. Open Cups.

LaBonta and Espinoza got engaged in January and married in October.

“I can't think of a better pair for the association to award as Honorary All-Americans for our 2022 United Soccer Coaches Convention in Kansas City,” said Geoff VanDeusen, Incoming United Soccer Coaches Chief Executive Officer. “Roger Espinoza and Lo'eau LaBonta have made their mark on the Kansas City soccer landscape and they exemplify what it means to carry the title as Honorary All-Americans."