Haaland vs. Hinteregger: when abusive conduct is not properly punished 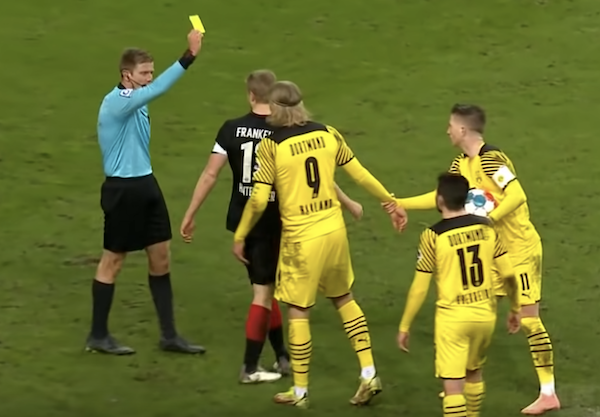 One of the best games in the spectator-free Bundesliga this past weekend was Eintracht Frankfurt's home game against Borussia Dortmund. The visiting title-challengers came back from 2-0 down to win the game late by the best goal in five. Within the game was a bruising duel between Frankfurt's uncompromising Austrian central defender Martin Hinteregger, and Dortmund's formidable but explosive young Norwegian striker Erling Haaland. It's fair to say that the two did not spend Saturday evening comparing notes on what a relaxing holiday season they'd both spent with their families.

For most fans, there's only one way to view a clash like this -- with a bucket of popcorn and a keen sense of anticipation. For most of the game, Hinteregger neutralized the demonstrably frustrated Haaland, but late in the game Haaland found more space and was partly instrumental in his team's comeback. The theatrical scene that most fans would have been waiting for duly came after Jude Bellingham equalized for Dortmund in the 86th minute to make the score 2-2. Haaland rushed in to the goal to retrieve the ball for the re-start -- in fact a potential yellow-card offense for 'delaying a restart,' because it's not his ball to retrieve, but pro referees never, ever punish it. Hinteregger blocked his path, and then pushed him hard into the back of the net. There followed the inevitable shoving and shouting, followed by a yellow card for both players from referee Robert Schröder.

So, the fans at home on the sofa got what they wanted. There would have been a certain amount of macho glee about soccer being played by real men, for real men. Referee Schröder was given a high mark by kicker magazine and praised for the "confident way he dealt with the fighting cocks Haaland and Hinteregger." Unlike other media, the publication did not mention that Haaland yelled loudly at Hinteregger (in English) "Fuck you! Fucking idiot!" And that this was picked up by the TV cameras. If the viewers at home heard it, then referee Schröder certainly did too, because he was right there in the melee blowing his whistle and thrusting his cards.

Now, I'm not saying that Schröder didn't deal well with the confrontation under the circumstances. It's just that in Law 12 of the game, under Fouls and Misconduct, it clearly states that a player who uses "offensive, insulting or abusive language" should be shown the red card. Haaland didn't just mutter these words under his breath, he was loud, emotive and most definitely offensive, insulting and abusive. If this game had been taking place on one of the sports grounds just down the road where I regularly referee the city's lower leagues on a Sunday afternoon, I wouldn't have hesitated to order the player off. Maybe both of them - Hinteregger's push on Haaland could easily have qualified as violent conduct.

Ah, but come on, it's a man's game, all part of the spectacle etc. Here's Dortmund's director of sport Michael Zorc on the conduct of his player: "Erling's attitude in the final minutes was not just good, it was top!" Zorc told the broadcaster Sport1. "It's exactly what I expect of him. I find it exceptionally good. We're playing soccer, not chess. He threw himself into the fray and worked for the team. That's how it should be." Haaland, it should be mentioned, still had time after his yellow card to square up to Eintracht's Colombian striker Rafael Borré after being fouled by him, yelling 'Que pasa?' several times in Spanish while gesturing his apparent readiness for a fight. Clearly he'd learnt his lesson from Schröder's caution ...

Hinteregger, who has a refreshing perspective on soccer's relative importance, didn't make a big thing out of the insult. "You don't need to take everything literally that comes out of the emotions of the game," he told the German tabloid Bild. "At the end of the game you shake hands and that's it. Haaland's a top player who does everything he can for the success of his team."

Except that neither Zorc nor Hinteregger will have to referee a game on an amateur soccer field next week where every single player will have watched these scenes, and heard the excuses that the professionals continue to make for this kind of behavior. It's been said a thousand times before, but when the pro game legitimizes this kind of conduct, there's a knock-on effect all the way down to the lower ends of youth soccer. I see it weekend after weekend.

Look, you might now say, Hinteregger's right. No one takes soccer's rules literally, and implementing those rules is all about having a feel for the game and its context. That is certainly true for much of the wording in FIFA's little 17-law booklet. There are many, many clauses that are open to interpretation and that have to be applied in context. But a red card for "offensive, insulting or abusive language" is not one of them. At least, I didn't think so until Saturday. Then Michael Zorc went on the record to tell the world that it's "exceptionally good," and exactly what he expects from one of the most highly rated young players in the world.

Like many of FIFA's rules, this one either needs to be implemented from the top downward, or scrapped altogether, just so that we can be clear on what's expected from us as referees. If it's the former, then show a choleric, screaming professional like Haaland the red card the next time he insults an opponent for all to hear. If it's the latter, the rest of us can quit refereeing and let more tolerant individuals like Michael Zorc take our games at the bottom end, liberally allowing all the players to scream insults and square up to each other as part of their burning desire to win. I'll stay at home and take up chess.

germany, referees
18 comments about "Haaland vs. Hinteregger: when abusive conduct is not properly punished".
Read more comments >
Next story loading