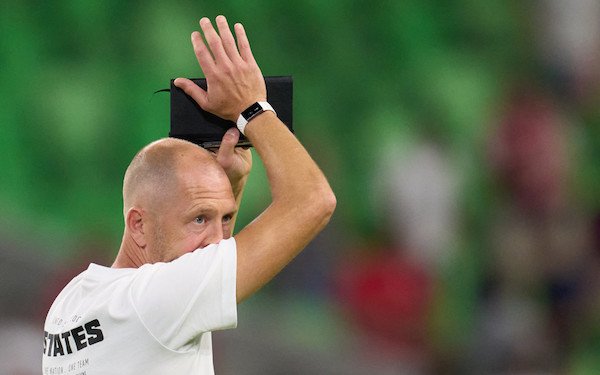 In September, star Christian Pulisic missed the opening match at El Salvador in order to work on regaining his fitness after being forced to enter a 10-day quarantine following his positive Covid test in August at Chelsea. Projected No. 1 keeper Zack Steffen, who was battling back problems that kept him out of the opener, missed the second and third matches after testing positive.

But the Covid-19 situation has changed drastically in recent weeks due to the rapid spread of the highly infectious Omicron variant around the world. Dozens of league matches in Europe have been postponed due to new virus, and teams have been forced to limit capacity to 5,000 fans in France and Italy or close their doors to fans in Germany, bringing back memories of soccer for much of the 2020-21 season.

With the USA scheduled to play three World Cup 2022 qualifiers, beginning with a home game Jan. 27 against El Salvador in Columbus, Ohio, Omicron is very much a real threat to the USA's World Cup hopes. If players are going to contract the virus, better they do it now -- and recover quickly and safely -- and not at the end of the month?

Several European-based U.S. internationals -- Sergino Dest at Barcelona and Konrad de la Fuente at Marseille -- have tested positive, according to club or media reports. but resumed regular activity. Joe Scally, who turned 19 on Dec. 31, missed Borussia Moenchengladbach's 2-1 win at hard-hit Bayern Munich but has already been cleared to return to training.

Covid positives in Phoenix. At the U.S. national team camp in Phoenix, where 20 MLS players entered training on Friday, there were positive coronavirus tests among players arriving at camp.

"Fortunately, most are asymptomatic and now it's just about a little bit of a waiting game,'' U.S. national team coach Gregg Berhalter said on Monday's national media call. "But that's our reality, and that's what all sports teams are dealing with.''

The possibility of Covid cases among the players arriving for the three games against El Salvador, at Canada -- where the CDC on Monday issued an advisory against travel -- and against Honduras on Feb. 2 in St. Paul, Minnesota might force Berhalter to expand his roster even if it means some players might not play or even dress.

"We'll be ready to adapt, we'll have a contingency plan in place," Berhalter said in response to a question from Soccer America. "We're not exactly sure how many extra players we'll take. But we're going to be thorough and make sure we have a roster that can compete."

Little time off. While in Phoenix, the USA will play three scrimmages. Berhalter believes they will keep MLS players he had in camp in December ready to go at the end of January.

"I think the important thing here is just to understand why we did the December camp and why we had these guys playing," he said in response to a question about whether European-based veterans like John Brooks, Tim Ream or Matt Miazga might be recalled as cover for Walker Zimmerman and Miles Robinson, the starting center backs in the 2-0 win over Mexico. "Brenden Aaronson, for example, hasn't played [with Austrian leader Red Bull Salzburg] in a month -- he was off Dec. 12 -- but Walker Zimmerman's last game was Dec. 18 and now he was back in camp in Jan. 7, so there wasn't that much time off for these guys."

Berhalter said it was too early to know whether Gio Reyna, who has returned to training at Borussia Dortmund but hasn't played in more than four months due to a hamstring injury, or Tim Weah, who starred for the USA during the November window but hasn't played since Dec. 1 due to a quadriceps injury suffered at French champion Lille, will be available.

Dest's resiliency. Those 14 days will probably determine Dest's future at Barcelona, where he has played one LaLiga game since October and is rumored to be on the way out.

“He’s in a situation where it’s probably at one of the biggest clubs in the world, and there’s a lot of pressure,” said Berhalter. “There’s a lot of pressure every single week. I think he does a good job of dealing with that not letting it affect him too much. He’s a competitor. He’s a guy waiting for an opportunity and then when he gets his opportunity, he performs well. He’s resilient and he has the right mindset to do it. He’s been working hard. He had a little injury setback at the end of the year with his back. He’s committed to making it work and he has a great attitude towards that.”