Weston McKennie: 'In market talks about outgoing midfielders, he is no longer talked about'

Weston McKennie scored the opening goal for Juventus in Tuesday's Supercoppa Italiana in Milan, but it went for naught as Inter Milan rallied to win, 2-1, in overtime on Alexi Sanchez's goal on the last kick of the game.

McKennie's goal came on a header in the 25th minute at the San Siro. He was bidding to win his third cup trophy in two seasons with Juventus. It won the Supercoppa Italiana and Coppa Italia in 2020-21.

In recent months, he has silenced his critics after months of speculation about his impending exit following the arrival of new coach Massimiliano Allegri.

“We made a naïve mistake five seconds from the end," said Allegri in reference to defender Alex Sandro's botched attempt at a chest pass in the middle of the penalty area, "but played against the strongest team in Italy at the moment and had several chances, allowing Inter very little. We struggled in the opening 10 minutes, but then did really well.”

Gazzetta dello Sport gave McKennie the highest grade on Juventus with a "7" for his end-to-end work in midfield and on the right wing over the 120 minutes.

"Not by chance," Gazzetta's match reporter wrote, "in market talks about outgoing midfielders, he is no longer talked about." 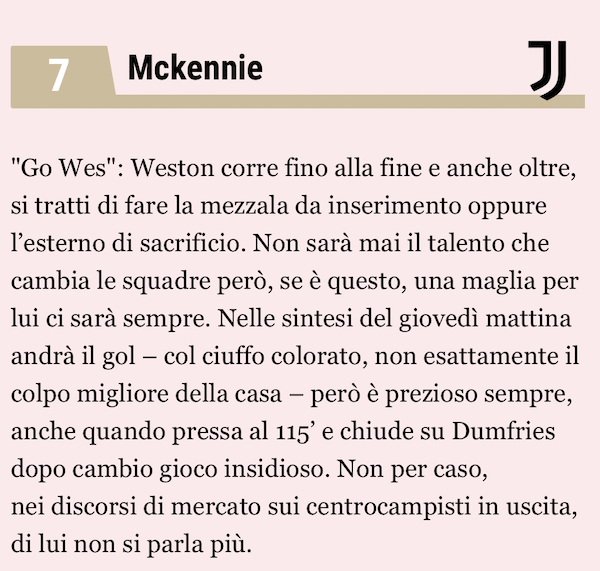 americans abroad
31 comments about "Weston McKennie: 'In market talks about outgoing midfielders, he is no longer talked about'".
Read more comments >
Next story loading