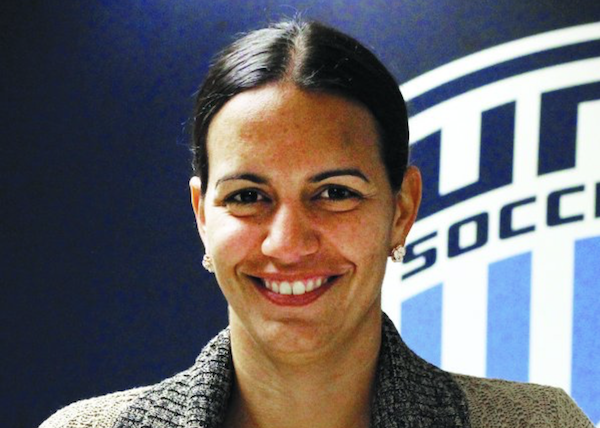 Ashlee Fontes-Comber  may have been born to coach.

Her father was an NFL, college and high school football coach. One of her three coaching uncles was head coach of the Detroit Lions.

But it was a high school basketball coach who unintentionally set her on her career path. He made her quit volleyball – and pressured her to stop soccer – to concentrate on his sport. Instead, she gave up a starting spot on the hoops team.

This week, Fontes-Comber takes over as president of United Soccer Coaches. She is the first female of color to serve in that post in the organization’s 81 years.

Despite her background, Fontes-Comber’s path to the family business was never assured. She and a friend coached a youth soccer team while still in high school because they thought it would look good on their resumes. She started at Florida State University, and while working at camps enjoyed giving back to the game. But after graduation, she wanted to separate herself from sports. She was ready to start a career, and hoped to transition from her role as an athlete.

Yet soccer kept pulling her back.

She was inspired by National Soccer Coaches Association of America courses. “It was the best thing ever,” Fontes-Comber recalls. “I wasn’t stuck behind a desk. I was out on the field, with young, ambitious athletes I could impact.”

She leveraged her background in business to work with D.C. United Women as director of operations, then with the Washington Spirit, Girls Academy and ATA Football. Along the way she earned an M.S. from Northeastern University and is pursuing a doctorate in management from Florida State.

The female side of the game is her primary passion. When she joined the fledgling Girls Academy in 2020, she was excited to help build an organization that empowered its players while bringing in Lesle Gallimore and Amy Griffin  for the project. Another women’s soccer leader, Nicole Hercules, got Fontes-Comber involved in ata Football. She’s now vice president for market strategy, helping deliver live and streaming women’s games from around the world.

“This is a phenomenal vision, making an impact on the soccer culture everywhere.” It’s important too, she says, to “fill the gap, and show female role models for girls – and for boys.”

Right now, however, her primary focus is on United Soccer Coaches. She assumes the presidency of the group (it was called the NSCAA when she began her coaching education) in Kansas City during its annual convention Jan. 19-23.

Her role models in the organization include former president Louise Waxler and Sue Ryan, who coordinates advocacy efforts for women, Blacks, Latinos, LGBTQ and other underrepresented groups.

But Fontes-Comber’s perspective is different from even the few other female presidents. With a father whose family hails from Cape Verde and a mother who is part Cuban, she is a minority within a minority. When she was elected to United Soccer Coaches board four years ago, her perspective was unique.

Now she’s in charge of 30,000 coaches: male and female; professional, college, high school and youth. She wants them to recognize that whatever level they work at, their focus must be on their players.

“Without players, we don’t exist,” Fontes-Comber notes. “We have such an influence on them, no matter what level. We have to be good, ethical human beings. That doesn’t mean being soft. But it does mean recognizing that players come from all walks of life. If we embrace those differences, we can be very effective.”

At the same time, she’ll seek ways to integrate the women’s game into the conversation at all levels of the association.

Some of her challenges are the same as at any large organization, like making sure the board and national office stay connected to its members. “When leaders sit in a room, we can’t be the only voices,” she says. “We have to understand every member’s struggles and triumphs. We have to have our pulse on the ever-changing dynamics of soccer in this country. We can’t be siloed.”

So how will her term as president be seen?

“But for me, at the end of this year, I want to ask: ‘Do we feel we are a cohesive unit, as coaches, a board and a national staff? Have we made a positive impact, and gotten on a positive path to bringing our soccer community together?’ I hope I’ve made everyone who is counting on me proud.”