How to stall referee abuse in youth soccer

Around the soccer fields of the German city where I live, coach and referee there are numerous posters and stickers declaring, 'Respect!' and 'Thanks, ref!'

At some clubs there's still a longer document called the Frankfurt Declaration pinned up near the locker rooms, signed and agreed upon by all clubs several years ago, and in which they pledge to do all they can to protect the referee and promote a sporting atmosphere during games. It was drawn up around a decade ago after a particularly rough patch for game officials in the city.

These well-meaning campaigns, initiated by the state federation and the referees' association, mean nothing once the game has started. A player doesn't complain vociferously about a decision and then suddenly bang their palm against their forehead and shout, "Oh no, sorry - I forgot! I'm supposed to show respect! I apologize, Mr. Referee. And, by the way, thank you for being here today!"

When I come home from games weary at another afternoon of moaning, fouling, squabbling, confrontation and gamesmanship, my wife sometimes asks me, "Are you sure it isn't you?" Just like players, a referee's confidence will suffer if they feel they have had even one bad game, or have been made to feel so. When discipline goes off the rails, you will always ask yourself in retrospect, "Could I have done something to prevent that?"

Sometimes the answer is certainly yes, sometimes it's 'Maybe,' but on many days the actions and emotions of one or several players are beyond your control. Nonetheless, I started to ask around and talk more to my colleagues about what they were going through every weekend. It turned out that it definitely wasn't just me.

So during this year's winter break, a group of us sat down to discuss what we can do to improve the state of sportsmanship in our city, especially in the youth game. We decided to focus in particular on youth team coaches, because this is where the problems start -- during a player's formative years. Just before Christmas, one youth coach in our city was banned for three years for approaching and threatening a referee in a dark parking lot. Such strong punishments are welcome, necessary and long overdue (it wasn't this particular coach's first offense), but we wanted to look more at how to prevent such incidents, and to improve the overall atmosphere at the field on game day.

Poster and sticker campaigns were off the agenda. Right now, we are working on a manifesto that is focused on initiatives to retain more young refereeing recruits (over half of them quit within the first year, most citing abuse from coaches and parents), better accountability, and compulsory education for anyone listed as being responsible for any youth team in the age groups U-11 to U-19. Here are some of the suggestions:

Raising Awareness. The Football Association in the English county of Worcestershire recently introduced a campaign whereby young referees wear bright green socks (#SeeTheSocks) during their early years of refereeing to indicate to everyone at the field that a child/young adult is in charge of the game, and that they are still learning. It's stunning that there are adults on the sideline who need to be reminded of this, but it's where we are -- not just in Germany, but in the UK and the USA as well. We are suggesting a similar initiative in our city. 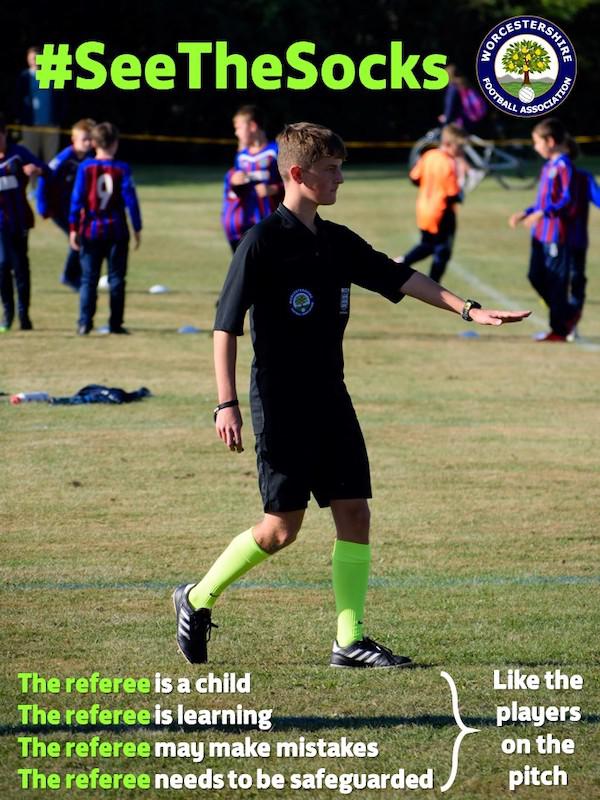 'D' license. The introduction of a compulsory, federation-run two-day course for any adult who hasn't already qualified as a licensed coach, and who is taking responsibility for a youth team from the U-11 age group and upward (U-9 games and below do not have referees here -- but during these years would be the perfect time for coaches to take the course in preparation for coaching and managing the older age groups). The course would include a written exam, and include refresher courses and exams every 12 months. It would focus not just on how to treat and handle referees, but also how to coach and respect young players, with the emphasis on player development, and the stress very much taken off results, points, league position, trophies, rankings, and yelling with a clipboard in your hand (my dominant memory of youth coaches while refereeing in the USA. Plus, the chinos. Always the chinos. There is of course no correlation between chinos and bad coaches. Yet, strangely, all the most choleric and clueless coaches wore chinos. And shades).

A digital photo ID card for all coaches or anyone in the coaching technical area (players already have these, so why not coaches and team managers?), to be issued only once the above 'D' licence compulsory course has been completed. Without the pass, the adult is not allowed in the technical area. When serving a disciplinary suspension, the pass is annulled until the adult has re-taken the course.

Voluntary Ref Guarantors. Each team/club should appoint an adult responsible solely for the referee's welfare. This would be a non-coach, responsible for the continued education of coaches, managers and parents about the respectful treatment of young referees. On game day, this adult should be responsible for the referee's welfare, ensuring they are made welcome, monitoring coach and crowd behavior, and intervening when necessary. The main thing is that young referees know someone else is there who's got their backs when no neutral refereeing coach/mentor is present. Re: the latter: we are asking our own refereeing body for the current mentoring program to be extended long beyond its current span of a new referee's first handful of games.

Accountability. Coaches must be made responsible for the behavior of their players. When a youth player is red-carded for violent conduct, serious foul play or insulting a referee, then the coaches must also appear with the player at any disciplinary hearing and explain why the player had not been taught the appropriate sporting values, and what internal procedures are being implemented to sanction the player, and to prevent that player or their team-mates from committing further offenses.

These are just some of the proposals, and they are aimed at tackling a specific and critical situation in our city. However, the manifesto contains some universal pointers which I feel would be useful to sport as a whole. And that's why I'm presenting them here in the hope that they trigger further thought and debate. Thank you for reading.