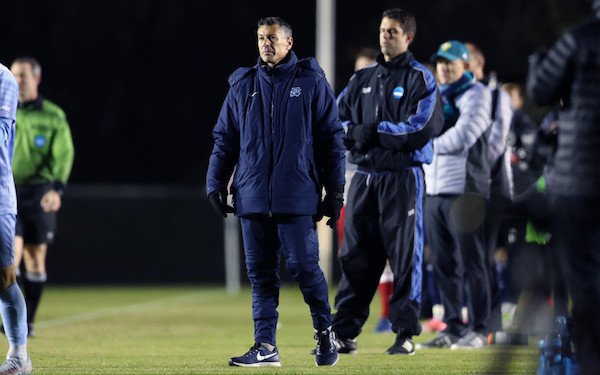 The good news is that the vote is on the docket for the NCAA's April Council Meeting.

But two years later, the committee spearheading the effort is starting over, beginning with a new chairperson, North Carolina head coach Carlos Somoano.

At the NCAA Division I men's open meeting on Friday at the United Soccer Coaches convention in Kansas City, Somoano presented an overview of the status of campaign and challenges that lie ahead. Only about 15 Division I coaches were in attendance. Many who planned on attending the convention were prevented from doing so following the Omicron outbreak that imposed new protocols at athletic departments around the country.

Background. College coaches believed momentum was in their favor to get the proposal for a split season approved. It had the backing of three power conferences (Big 10, ACC and Pac-12) for the legislation.

The split season would eliminate most midweek games. (A Division I men's team currently plays a regular season of 17-19 games in 10 weeks, in addition to a couple of preseason games, and NCAA postseason games, up to six.)

"We were at a point in 2020 where we were in March and Covid shut down the world," Somoano said. "We were six weeks away from having a vote, and everything was put on pause."

What's next. Somoano said work started in the fall to get the campaign rolling again.

"I had to go back and really refresh myself on all the materials and the language and how we got there," he said. "In spite of the fact that we put a lot of work into it, we have to go back and redo the majority of this process in the next couple months and redo it in a short period of time."

The challenge: many of the actors are new.

"We're re-educating and re-energizing the coaches community and the players because many of your players changed since then, if not all," said Somoano. "Administrators have changed at different schools, different AD's, committee members on the different committees that are weighing in and and taking positions have changed. So we have to reeducate a whole new group of people."

Somoano stressed that the change to two seasons is not, in selling terms, an "expansion" to a year-round model. He said it's really just a "redistribution" and "reduction" with the purpose of balancing academics and athletics.

"There are some legitimate challenges there and concerns that people have," he said, "but there are also legitimate solutions for those concerns and challenges. And over the last couple years, we've addressed them. I think there's answers for those questions, but there's no substitute for knowing what those answers are and really thinking through it."

Somoano said one of the advantages those pushing the split season now have is the experience of playing a spring season. Covid-19 shut down college soccer at most men's and women's programs in the fall of 2020.

"We did have a spring championship [in spring 2021] and it went well," he said. "So I think we can take the lessons that we got from that and try to extrapolate and say, OK, we're able to do that over two semesters and it potentially could even be better."