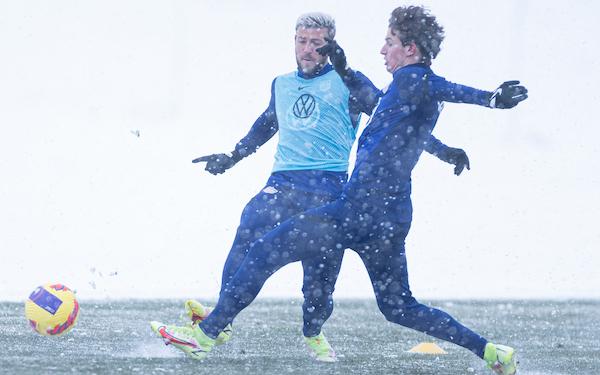 Right now, an accumulation of snow is forecast for just one of the USA's three World Cup 2022 qualifiers over the next 10 days -- 1-3 inches in St. Paul, Minnesota, next Wednesday when the USA faces Honduras.

Just to be prepared, U.S. national team players got a chance to prance in the snow on Monday when they opened training ahead of the triple window.

There was snow on the ground at the Columbus Crew’s OhioHealth Performance Center, where U.S. players -- the 13 MLS players from training camp in Arizona, plus seven early arrivals from Europe -- opened camp ahead of Thursday's match against El Salvador in Columbus.

The temperature for kickoff Thursday night is expected to be 25 degrees. On Sunday, the USA will play Canada in Hamilton, Ontario, where the forecast is a high of 19 degrees in the afternoon with a chance of scattered flurries. In St. Paul, the forecast is for temperatures to dip into the single digits in the evening after snow during the day.

Brenden Aaronson knows all about the conditions, arriving from Austria, where his club, Bundesliga leader Red Bull Salzburg, is in the middle of a two-month break, training in Salzburg ahead of the league's restart on Feb. 11.

“I was just outside today training and it's really cold, and my feet felt cold,” said Aaronson on Monday's media call. “But listen, I'm used to it, I just got back from where it was snowing last game."

Aaronson said the players based in Europe are used to playing in the winter, and he thinks most of the MLS players on the team have dealt with harsh conditions, but he says there's no real way of getting around how cold you'll be.

El Salvador held its first practice in Columbus on Monday.

Most of the Salvadoran players -- 15 of 23 -- play for clubs in Central America, but the squad does feature five Americans, including Eriq Zavaleta, who was born in Westfield, Indiana, and plays in MLS for Toronto FC.

Head coach Hugo Perez brought La Selecta to Grand Park Sports in Westfield last week for winter training, and it was greeted by snow at its team hotel in nearby Noblesville.

The team that will have the harshest adjustment is Honduras. The Catrachos will host Canada and El Salvador in San Pedro Sula before heading to St. Paul, where they'll likely have one day to train in the cold.