Bundesliga fans getting gouged to watch a foregone conclusion 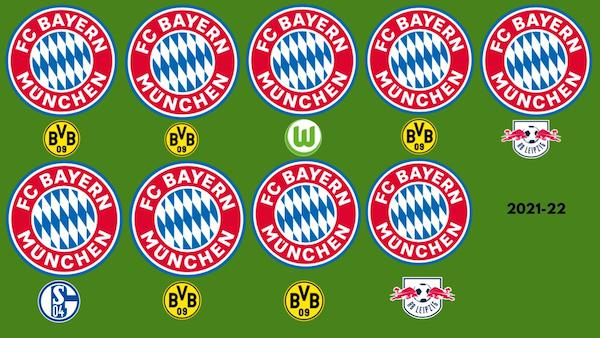 The streaming service DAZN this week announced it will soon more than double its monthly subscription rate in Germany from €14.99 to €29.99. As Bundesliga broadcasting rights are split between DAZN and Sky Sports, this means that anyone wishing to see all their team's games on TV will have to pay around €57 ($65) per month. That's not only a problem for the fan, it's a problem for the league as well, which can be summed up in two words: Bayern Munich.

"The only team that can do a half-decent job of representing Germany in Europe," a relative of mine once muttered when I was in one of my anti-Bayern rants in the middle of a christening party (hey, I kept it in until we'd left the church). That's a positive spin on the Qatari-sponsored Bavarian side currently six points clear at the top of Germany's top flight, and well on course to secure its 10th successive title. A record! How exciting is that, says exactly no one, not even Bayern fans. Not even the Bundesliga, which is forced to focus on the relegation struggle for excitement. Not a good look.

Bayern's dominance and the missing thrill of genuine competition is much discussed in German soccer circles, but no one can think of an answer that wouldn't end up being some kind of revolution. Abolish the UEFA Champions League, say, or at least oblige the participating clubs to share their UCL earnings with the rest of the league. Enforced socialism in a meritocratic structure, in other words. See how many clubs vote for that. And try explaining to Bayern why the work they've put in over the decades to establish themselves as one of the most successful clubs in the world should no longer count.

Unsatisfactorily, the simplest way out of this would have been for Bayern to defect to the failed European Super League project, which you might recall was the next big thing in soccer for around 48 hours last spring. Take the biggest, richest clubs out of any major European domestic league - all those Champions League perennials - and then you might see a competition amongst equals again, albeit without some significant players. Still, there could be several clubs unaccustomed to silverware battling for the title, and not just in the Bundesliga. A poor midseason run might not necessarily exclude winning the championship. You might not have half the league playing relegation-avoidance soccer from August until May. Just like it used to be in the 1970s, when no one was rich and players didn't earn enough every week to start a new small business.

Only, those troublesome fans (that none of those super-clubs thought about asking) didn't and don't want to be part of the ESL project. Something to do with history and heritage and a certain sense of honor, and everything not being about making more cash and kicking off at times suited to an audience with no kind of connection to the cities where these games are still played (at least for now, with the exception of the Spanish 'Super Cup' in soccer-loving Saudi Arabia). Never mind that it's decades too late to stop the grab for cash that started with the Premier League and the Champions League in the 1990s, and has continued thanks to inflationary sums for broadcasting rights and high-stakes sponsorship from firms and states with questionable ethics and human rights records.

So, we're back at square one. How can the Bundesliga keep its fans interested when every single one of those fans knows that Bayern Munich will be champion before a ball's been kicked? Let alone justify charging them €57 a month before they've even left the house and set off for the stadium.

The league could stage playoffs between the top six to eight clubs, but then Bayern would probably win those too. Even if they didn't, no one's going to say that the fifth-place team winning the title is anything more than a charade. I remember the debate in MLS about playoffs when the league was in its early years. Why did the league not just crown the best team at the end of the season? You know, the team with the most points over eight months of soccer? Like the rest of the world, where there's a true soccer tradition.

As a compromise, MLS conjured up the Supporters' Shield for the team with the best regular-season record. Has there ever been a ticker tape parade through town for the team that won the Supporters' Shield? Could you name the winners from 2012? Or any other year? You really need to go for one or the other, and in the USA it's the playoffs that have tradition on their side. No one would now seriously suggest abolishing MLS Cup. (On the other hand, I love the thought of a highly paid U.S. consultancy flying in to Europe and trying to sell the idea here. Sure, just head for the beer stand and let us know how you get on. If it doesn't go down well, suggest the All-Star game instead! Here's the number for security, just in case.)

Other than turning back the clock, the Bundesliga has absolutely no answers at all to the problem of Bayern's monopoly, other than exhorting the other teams to up their game. "Look, that Lewandowski, he's good, but have you tried stopping his shots? Just get in his way. Take the ball off him." If it were only that simple. For the fan, though, the answer really is simple. We can stop paying €57 per month to watch an inferior product, and force the Bundesliga to get a little more creative. In the meantime, just watch the highlights on free-to-air TV instead. Like we used to do back in the 70s.