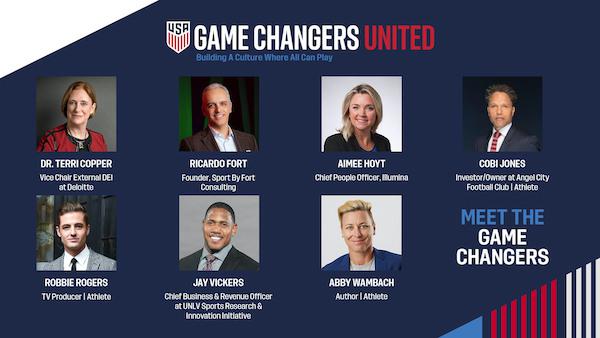 Game Changers United (GCU), a seven-member Diversity, Equity, Inclusion and Belonging (DEIB) Advisory Council, has been launched by U.S. Soccer to work with the federation on assisting its "commitment to break down barriers and create a place where every individual is welcomed, respected, and valued within the entire U.S. Soccer ecosystem."

The GCU council will meet quarterly beginning next month to identify necessary actions and make recommendations to U.S. Soccer leadership to drive DEIB initiatives. Its members are:

• Cobi Jones. The Hall of Famer earned a U.S. record 164 caps in 1992-2004, played in three World Cups, the 1992 Olympics, and spent more than a decade in MLS (1996-2007, with the LA Galaxy). He's currently a commentator and analyst.
• Abby Wambach. The two-time Olympic goal medal winner and World Cup champion is the U.S. women's all-time leading scorer with 184 goals in 255 appearances. Also a Hall of Famer, she retired in 2015 and lives in California with her wife and their three children.
• Robbie Rogers. In 2013, Rogers became the first openly gay man to play in a top North American sports league and in 2014 he became the first openly gay man to win a major sports championship (with the LA Galaxy). He played for the USA at the U-20 World Cup, the 2008 Olympics and his 18 caps for the full national team included the Gold Cup and World Cup qualifying.
• Terri Cooper. Serves as the Vice Chair of External Diversity, Equity, and Inclusion at Deloitte Consulting LLP. She previously served as Deloitte’s Chief Inclusion Officer.
• Ricardo Fort. Founded Sport by Fort Consulting, which helps investors, sponsors, rights-holders and athletes build sports partnerships, in 2021. He has been involved in marketing companies including Coca-Cola, Visa and Kellogg’s.
• Aimee Hoyt. The Chief People Officer at Illumina since 2018. Under Hoyt’s leadership in Illumina's human resources department, the biotech firm has earned two consecutive top scores of 100% on The Human Rights Campaign Corporate Equality Index.
• Jay Vickers. The former Notre Dame football player (1996-2000) has spent more than 15 years as an athletic administrator in the higher education industry. He is the Chief Business & Revenue Officer at UNLV Sports & Research Initiative.

“We are excited to have such a diverse group of people join us in our overall mission to make diversity, equity, inclusion and belonging a true part of U.S. Soccer’s DNA,” said U.S. Soccer President Cindy Parlow Cone said in a statement. “While we’ve taken steps in the DEIB space, we know we have much more to do and these individuals will help guide us forward and act as a change agent by challenging the status quo and championing DEIB principles and practices. The advisory council knows that the strength of the Federation is in its differences, and we need to lean into that opportunity to create real impact at U.S. Soccer.”

The creation of Game Changers United follows U.S. Soccer's creation of the One Nation Initiative in the wake of the murder of George Floyd to forge social responsibility platforms, including Coach for Community, Community Youth Programs, Game Day Ambassadors and the One Nation Fund.